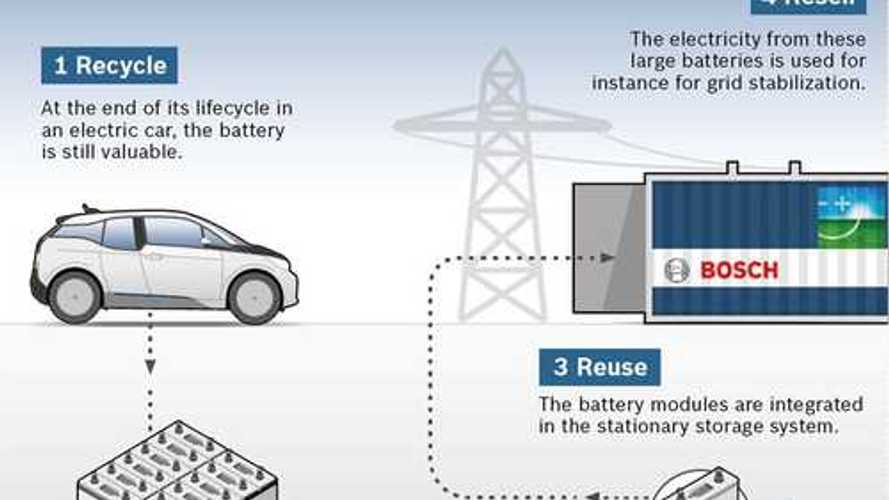 By the end of the year, the three companies will build a 2 MW/2MWh ESS in Hamburg, Germany.

Over 100 battery packs from BMW ActiveEs and i3s will be reassembled into one ESS that will then be integrated with the grid.

It seems that BMW is preparing for further such installations in the future.

"Batteries from electric vehicles for a stable power grid

Electromobility and power storage are two core elements of the move to alternative forms of energy. A project is bringing Bosch, the BMW Group, and Vattenfall together to drive progress on both technologies by interconnecting used batteries from electric vehicles to form a large-scale energy storage system in Hamburg. Its energy is available within seconds and can help keep the power grid stable.

Bosch, BMW, and Vattenfall believe in this concept and as a result have launched the Second Life Batteries alliance. BMW is supplying batteries from its ActiveE and i3 electric vehicles, while Vattenfall has agreed to operate the massive storage system at its site for a period of ten years. Bosch is in charge of integrating the batteries and managing the system. The storage solution will become part of an already existing Vattenfall virtual power plant. This allows the partners to combine various small, decentralized power generating systems to market them as a shared power plant.

Lithium-ion batteries still have high storage capacity at the end of their life cycle in electric vehicles. As a result, they are still very valuable and can be used extremely efficiently as stationary buffer storage for many years to come. The project allows the three partners to gain numerous new insights into potential areas of application for such batteries, their ageing behaviour, and their storage capacity. Bosch’s management algorithm is intended to ensure maximum service life and performance as well as other benefits.

The company has already gained its first experiences in the field. In Braderup, located near the German island of Sylt, Bosch has built one of Europe’s largest energy storage systems to temporarily store the energy generated by a wind farm if needed. To do so, the company has connected thousands of small lithium-ion batteries to form a large-scale network. In Kelsterbach, a community close to Frankfurt, Bosch has installed a similar lithium-ion storage system at a housing complex. This knowledge is also making a difference in the Second Life Batteries project.

“The project is important because it combines two strategically significant goals,” says Bosch CEO Dr. Volkmar Denner, who believes in the future of the electric drive. “In electromobility, we see a future mass market accompanied by many new business models and solutions. Stationary energy storage systems that enable people to continue making good use of used batteries are part of this. Such decentralised storage systems allow us to make a major contribution to a secure power supply.”

Core element of the move to alternative forms of energy

Energy storage systems are considered to be a core element of the move to alternative forms of energy. They can absorb solar power during the daytime and release it at night – or secure wind power for moments when the wind is calm. By doing so, they help better integrate the often fluctuating supply of renewable energy into the power grid. Electromobility can also benefit from this development by making it possible to charge vehicles with solar power at night along with a host of other options. In addition, a storage system can supply its energy rapidly to stabilise power grids as part of a virtual power plant, for example.

The current plans call for the construction of a storage unit with an output of two megawatts (MW) and an installed capacity of two megawatt hours (MWh) in Hamburg. The energy will be fed into the energy balancing market to balance out short-term fluctuations in the power grid. More than 100 vehicle batteries will be interconnected to achieve these targets. The entire system is compact enough to fit in a small building. It provides enough output in mathematical terms to supply 30 four-person households with power for seven days. The partners expect the storage unit to be operational by the end of 2015."