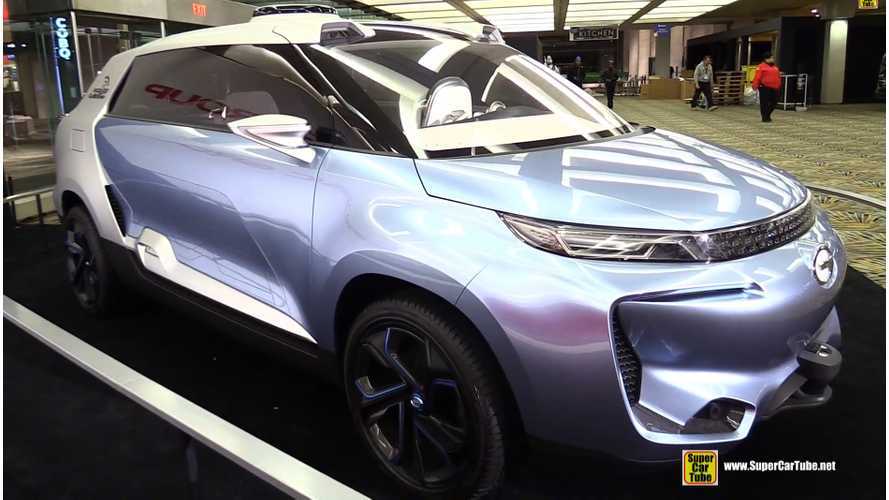 Chinese automaker GAC Motor presented at the 2015 NAIAS a plug-in hybrid concept car WITSTAR, but sadly the automaker forgot to send out a decent photo pack for media to raise more awareness of the concept.

As you can see in the videos attached below, the car itself has some interesting features like doors - one for both "rows" that open upwards.

Acceleration sound swell with 4.5 seconds listed until you read it to the end and see 0 to 31 mph (0 to 50 km/h). GAC does offer an aquarium with fish as standard equipment.

Some sources are indicating that there is 1-liter gas engine under the hood combined with an electric motor and a 13 kWh lithium-ion battery pack.

"WITSTAR, innovation for the future

WITSTAR is based on a sedan platform independently developed by GAC Engineering, the core of GAC Group's R&D capabilities. It is powered by a range-extended drivetrain, with a highest stable speed of over 160km/h, a 0-50km/h acceleration time of 4.5 seconds, and a maximum gradeability of 32%. WITSTAR has a driving range of more than 100km under pure electricity mode and an overall range of over 600km, with the gasoline consumption less than 2 liters per 100km. In terms of intelligence, WITSTAR features its point-to-point auto-pilot mode. With the technology to choose best routes and identify obstacles, autonomous driving can be realized, at daytime or at dark. In styling, WITSTAR adopts an avant-garde design and reflects GAC Group's direction in making future smart vehicles.

GAC Group has spared no efforts in its attempt to develop alternative energy vehicles. GA5 REV, a range-extended electric sedan, the first of its kind in China, was launched in 2014. It consumes only 16 KWH of electricity per 100km, with zero gasoline consumption and zero emission. Besides, GAC Group has established a joint venture to produce new energy buses with BYD, a Chinese automaker specializing in alternative energy development. The joint venture will expand into the international markets in the future.