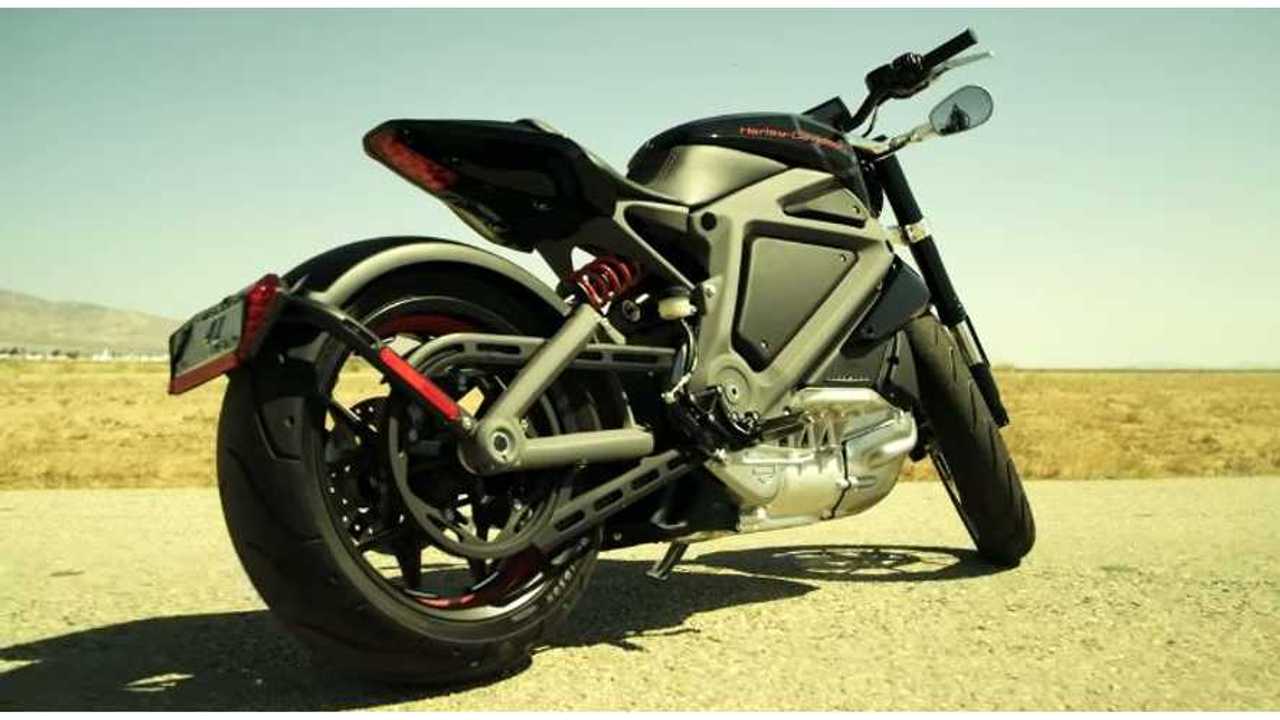 Preeee-posterous, as our favorite old family curmudgeon used to say.

Leaving the costs of the actual travel and staffing alone for a minute, and taking sort of a reverse-engineering approach to the build, let's look at some real world costs.  We are forced to make some assumptions here, most notably they were as frugal as possible, and didn't throw gobs of money indiscriminately at contractors like Mission Motors for the development.

Here's what we're starting with, via HD:

Setting aside the recharging claim, since there's no on-board charging, let's start with the motor/controller combination.  Our first impression of the longitudinal-mounted motor was immediate.  It looked like an AC-20 from HPEV with a plastic cover on the front, and a machined aluminum mount holding the body.  Not only that, it felt like an AC20, based on our rather considerable experience riding a bike so equipped.

The batteries?  Time for some really rough stabs, but let's say we want a complete system, plug and play.  We don't want to re-invent any wheels, and so we'd look at either Brammo or Zero for a pack.  Let's see - the Zero SR gets a claimed 100 or so miles with the 11kwh (nominal) pack.  So half that.  5.5kwh sounds about right, and the Zero Power Tank is 2.8kwh at $2500 (retail).  Put us down for two.

Time to build the frame.  The Harley frame is sandcast aluminum, and there were 40 bikes made, so we can't imagine it was like building a one-off custom frame, like what Framecrafters does, especially considering we're guessing there were little or no costs in tooling for a giant manufacturer like HD.  Given that a Framecrafters one-off is (if memory serves) in the neighborhood of $4000 for a trellis steel frame, we're going to slap $1500 into the cost of the frame.

Before we get all "...but what about wheels and brakes and all that?", let's take a look at what they're running.  None of it was top-shelf stuff, and we're assuming that a lot of it came from the HD warehouse.  For that stuff that didn't, HD has some clout when they call up and ask for one bike's worth of parts x40, they're going to get some decent pricing.  Just for the sake of argument, we'll throw in a high price of $1000 for all that, plus what is basic EV readout stuff and some really funky bad mirrors.

Oh wait.  That right-angle drive reduction gearing by which HD claims they've "engineered" the sound of the bike.  Considering we could get off the shelf right-angle drives for around $500 from Surplus Center, let's just throw $500 at that, but with the caveat that if HD paid that much for a simple right-angle reduction drive then they've melted down a lot of their transmission tooling from days of yore.

We've heard it before, though.  What about "development costs"?  What about them?  There's not one single thing about this bike that's unique or particularly advanced, in fact, you can pull about a dozen bikes' specs from 5 years ago and match them up with this bike.  Unless you consider what we just did above - doing a little online research and writing it down "development", we simply don't see it here, other than normal corporate overhead for any project whatsoever.  This project could quite literally be "developed" on a napkin in a bar.    And keep in mind, this project does not have to pass any DOT manufacturing requirements.  It's a prototype.

So let's compare, for a reality check.  The Zero SR runs at 100mph, 0-60 in 4 sec or so, is a comparable size, and boasts twice the range.  It's passed all the DOT stuff, has ABS along with a charger and some notably top-shelf suspension components.  The price?  $17,345 retail.  The 11kwh battery pack and charger come pretty close to evening out that playing field off the bat.  How about the Brammo Empulse?  Similar specs, and you can buy a 2014 Empulse R for a special sale price of $13,995.00.    We've got to guess thats pretty close to production cost, and the Empluse even sports a specially-designed 6-speed gearbox - a lot more pricey to design and build than a simple right-angle reduction drive.  Still.  Twice the performance numbers.

It's obvious that HD has spent tons of money on this project, from the ads and PR work, to the simple challenge of driving several teams all over the continent and everything that something of that scale includes.  (Just about the last thing we'd like to try to imagine is the insurance bill for this caper...)  But producing the actual bikes?  Not so much.