Silly Scooters, Seg-Things, Ninebot One, and Big Chuck in China (and videos) 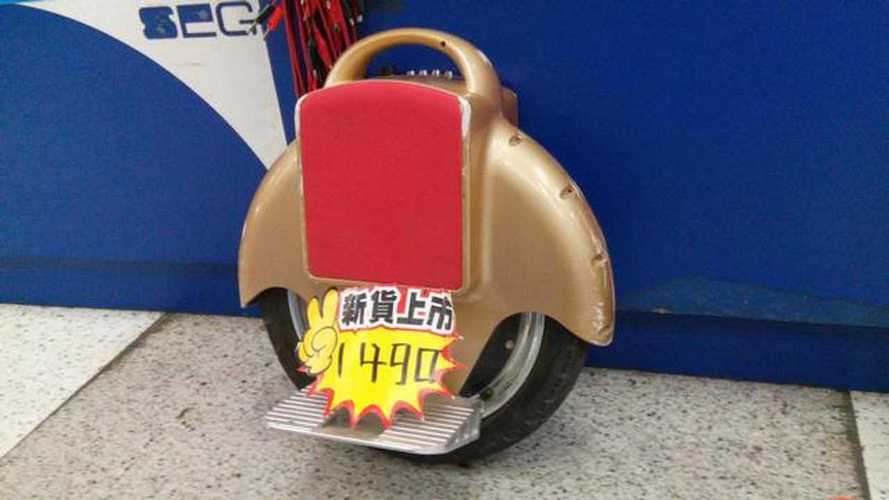 A lot of people consider a vacation to involve white sand beaches, umbrella drinks delivered on sterling trays and long, delicious afternoon naps within the sound of the lapping surf.  Not our friend Big Chuck.  We'll leave it to your internet detective skills to learn the true identity of Big Chuck, but he's the kind of guy who schedules his vacations to visit China and Japan's Maker studios, manufacturing districts - starting with Shenzhen, southern China, and street vendor EV parts tents.

Where he found this.

Chuck and his Maker bros call them "seg-things" - Segway-like devices that are self-balancing (thus, "it can seg.") and, surprisingly ubiquitous on the streets of China.  From his blog:

Also strangely common: These things. You might know them as solowheels, but their ilk populates this area like no other small transportation utensil I’ve ever seen. I think they spawn somewhere in the area. Maybe  2 dozen vendors over the whole day just had one or two sitting about. The lowest price I sweet-talked one to (and I wasn’t out to buy one, so I didn’t try very hard) was 1300 RMB or right around $200.

Want a taste of what it's like to ride one of these things?  Look no further than the SoloWheel's instruction video:

There's more.  Oh yes, much more.  This is only one example of the small, personal sized seg-things he saw there:

Fascinating.  Read on, and you'll see Chuck went off sleuthing to find the homeworld for the IMUVE02: Sunnytimes, and even paid them a visit, where they were remarkably forthcoming in sharing the details of their design, the products and their company.

We were looking at the Ninebot One, too.

They have some instructional videos too, but this one is more fun: stunting on the Ninebot One:

You've got to guess that it took all of maybe an hour before the first stunt was attempted on the first working prototype, right?  How can this not be a blast?

And now for the editorial.

We, in the US, have our notions about what Chinese manufacturing is all about, and after seeing this firsthand account of the bits and pieces available in China, literally on the street, it's hard to make a case that they're not one of the most aggressive and open "Maker" markets in the world.  Our particularly self-serving and self-aggrandizing view is that the US and others invent everything cool, and the Chinese simply rip it off.

Considering what could be fabricated by a simple walk down a street with some cash in hand on the streets of Shenzhen, compared with how much time and effort it would take to collect the same parts in the US, it's hard to argue that they're not encouraging invention and development of new technology - whether robotics, simple electronics or EVs.  Let's talk about EVs.  China is the world's biggest market for electric Vespa-style scooters and e-Bikes.  Granted, they have a huge air pollution problem still, but as Chuck put it:

I some times discount Tesla and all of the big Western efforts at “green transportation” and “future mobility” because of all the publicity, chest pounding, and government money-getting – the “look at us, we’re changing the world because we’re so awesome!” approach. In the mean time, you have these Chinese companies who literally have put tens, if not hundreds, of millions of people on electric wheels in the past 10-15 years.

When I came to Beijing in 2007, everyone still rode normal bikes. There are still normal bikes here too, but the 电动车 is now what you see 80% of people riding while carrying their extended family, week’s groceries, and two chickens. All on a 350 watt hub motor, even! Dirt simple, dirt cheap, and reliable.

No judgement here, just an observation.  After following the travels of Big Chuck through this paradise of pieces and parts, we're a lot less inclined to view China as simply a knock-off machine, but as competitors who have stepped up their game.  Indeed.  When we stop seeing them as "them", and us as "us", and realize we're all trying to bring the world into the 21st century, maybe some barriers can be dropped and some work can really start.