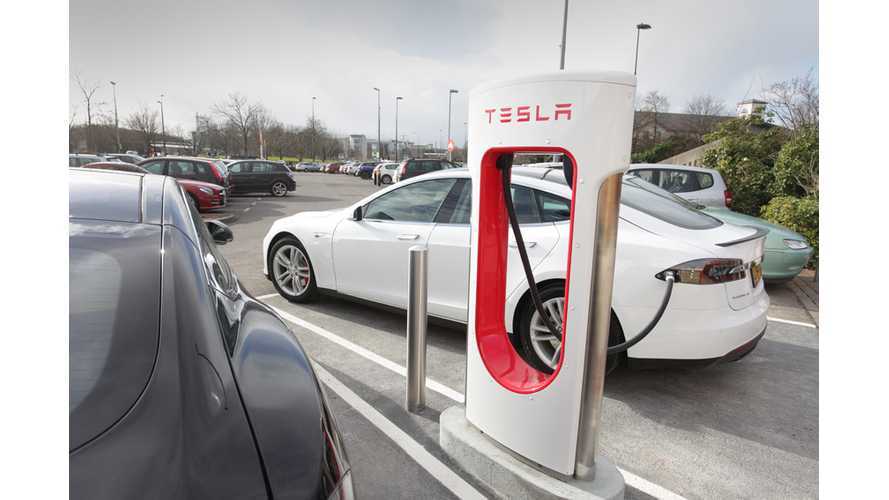 "The brief for the trip was simple. Tesla’s growing network of Supercharger points (which allow you to replenish a battery pack to about 80 per cent in 40 minutes) and the introduction of a new one just off the M20 near Maidstone, Kent, suggested that driving through Europe in a Model S might now be perfectly viable; we wanted to find out if it would be. "

The article begins with some drama, but in fact it wasn't bad until Autocar missed a Supercharger that was supposed to be part of the test:

"Sixty miles remaining. That’s what the Tesla Model S is telling me. It’s pouring with rain. The heater is off to preserve charge. The windows are steaming up and it’s freezing in the car.

I wouldn’t mind if we weren’t also restraining ourselves to a truck-flustering 50mph on a 75mph stretch of road. Fifty-nine miles.

Mind you, the last thing I want to do is end up at the side of the road, battery discharged and immobile. We’ve got just 15 miles to go to get to the Eurotunnel on the French side. The problem is that the next Supercharger point is 35 miles from the Folkstone exit. Either way, it’s going to be close. Fifty-eight.

A brief recollection of Apollo 13 flashes through my mind. I shut off the wipers and dipped beams – the weather is clearing a little – in an effort to save every amp. I temper my frustrations, while tearing my eyes off the now amber-lit range indicator, knowing I’ve really only got myself  to blame. Fifty-seven."

In short, the trip to the Amsterdam went as planned, but other day plans changed and the team missed a "checkpoint". The conclusion from the trip is that long-distance travel is possible until you deviate from the plan and miss a charging points. If a surprise awaits you, range may not be sufficient.

"The return journey poses fewer questions, given that we’ve already proved that the route works. But then a downfall of electric motoring strikes. We have to deviate from our route due to photography and scheduling constraints, bypassing a charging point and leaving us exposed to the crippling anxiety that a decreasing battery level can generate.

The Tesla soldiers on, though, its range indicator remaining seemingly truthful. We hit the Eurotunnel with 45 miles on the gauge, drive the 35 to Maidstone and have an indicated 10 miles left. The sense of relief, as the charging begins and another £3.30 is spent on coffee, is palpable.

Sure, you can do long-distance trips between planned points in electric cars, but it’ll be a while before the batteries have sufficient capacity to endure angst-free travel and guaranteed levels of performance for the duration. More charging points aren’t necessarily the answer, especially given how busy some of them are, the charging times and the logistics of getting to them. Battery swapping stations might help, but they don’t exist yet.

In five or 10 years, however, I suspect that the technology will have advanced so that most motorists won’t have to think twice about picking up the keys to an electric car. Based on how gratifying and easy they can be to drive, and how viable they are if your journey is a known quantity, I look forward to that day"