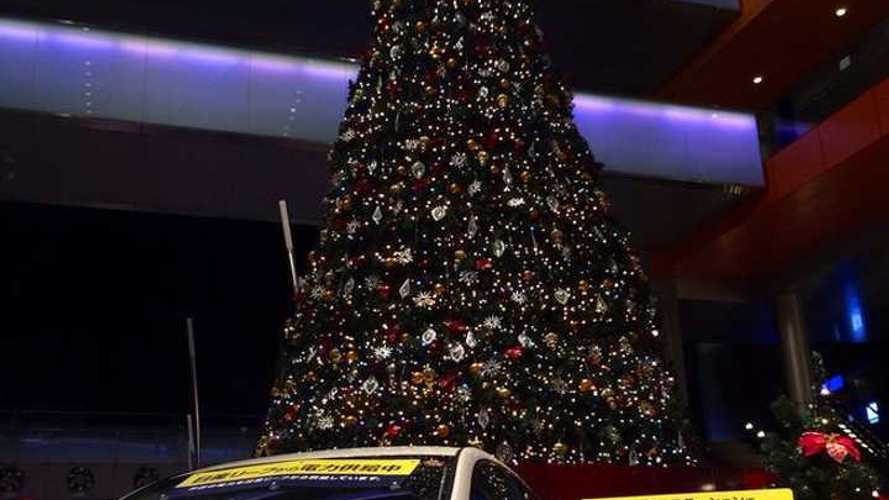 The Tradition Of Festivus Begins With The Airing Of Grievences...I've Got A Lot Of Problems With You People! (via NBC)

We hope you and yours have a had a great year and enjoy the season!

Normally we have a commitment to only report on electric vehicles around here...today however (and as I am alone minding the fort) I will be indulging my inner movie critic with a special/festive top 5:

It's A Wonderful Life (now via Paramount...thank goodness)

5. It's A Wonderful Life

Most people have the 1946 classic that follows George Bailey's discovery that he is the richest man in Bedford Falls (in more ways than one) right at the top of their list.

And it would probably be for myself as well if some intern at the National Telefilm Associates had not failed to renew the copyright on the film in mid-70s, which allowed the film to be freely broadcasted (endlessly) for the next 20 years...that is of course until someone found a loophole to once again make money on the film (and thus cut down the reruns) in the 90s.

However, by the time Republic Pictures (now owned by Paramount) was cashing cheques,  it was too late to save my youthful holiday viewing pleasure.  Even today, I can recall having a special hate for "Zuzu's petals" which interrupted my Saturday morning cartoons (and everything else) over the holidays.  A stance which has softened in old age.

What? It's a Christmas movie.

Who can forget the office Christmas party on the 30th floor of the Nakatomi tower in Los Angeles?  Or John McClane festively taking out all the terrorists that were attempting to quasi-rob the building of several hundred million dollars?

A classic the whole family can enjoy...provided they are over 18!

One of the few R-Rated holiday treats!

"The only thing you need to worry about is where you're going to buy your sweaters after the circus pulls out of town."

This movie is actually NOT on my list, however my son caught me uploading Christmas screencaps of my "top 5" Holiday movies earlier on Christmas Eve and chastised me for not including it on the list.

As my son is nine, I immediately exclaimed, "oh my gosh, I totally forgot that one", so here it is.

Truth be told, sarcasm is the conversational currency du jour around our house, and Junior has just started picking up on the skill - so Tim Allen's berating of "Neil's sweaters" always gets a youthful belly-laugh around these parts...no matter how many times we to see it.

Honestly, unlike the sequels that would follow the Santa Claus, it's not that bad at all.

My son also suggested Wil Ferrell's Elf (not hideous either), but I told him to start his own non-movie related website and make his own list if he wants that kind of control.

Author's Note:  This spot was originally going to be reserved for either The Bishop's Wife (1948) or Bad Santa (2003), which if you haven't seen either, they are pretty much the same film.

Scrooge - NOT To Be Watched In Color...Curse You Ted Turner!

Who doesn't love to see Charles Dickens' Ebenezer Scrooge come to life every year at Christmas...especially if it is in the form of the 1999 made-for-tv edition helmed by Captain Jean Luc Picard, Patrick Stewart himself?

Alright I kidd.  As the Highlander once said, "there can be only one" - and that "one" is the 1951 classic featuring Allastar Sim.  Although special points are merited (IMO) to Bill Murray's darker 1988 Scrooged.

Fun fact:  If it seems like there is a lot of "Christmas Carol" themed movies/tv shows, it is because there are - 134 of them to be precise.   Why?  Much like It's A Wonderful Life, a Christmas Carol was published as a novella in December of 1843 - so pretty much anyone can have at it for free...a phenomenon that also explains the scourge of Three Musketeers film previews one is generally forced to endure at theatres before the feature is shown.

"Remember Red, hope is a good thing, maybe the best of things, and no good thing ever dies."

Nothing says "Happy Holidays" like watching Tim Robbins' quirky ex-banker role as Andy Dufresne as he struggles though prison life after being wrongful convicted of murdering his wife and lover.  Along the way, Andy waxes poetic about life, gains the respect of his inmates and guards, while secretly masterminding his (very fulfilling) escape over decades of imprisonment.

Ultimately, Andy gets his come-uppings (yes, I said "come-uppings" - the movie was set in the 40s, so it is totally fair turn of phrase) over a corrupt warden determined to keep him incarcerated.  Special bonus/spoiler:  the movie closes with Andy reuniting with his long-time friend (and inmate) Red on a beach in Sa Wa Teneo, Mexico.

"I find I'm so excited, I can barely sit still or hold a thought in my head. I think it's the excitement only a free man can feel, a free man at the start of a long journey whose conclusion is uncertain. I hope I can make it across the border. I hope to see my friend and shake his hand. I hope the Pacific is as blue as it has been in my dreams. I hope. " - Red

Author's Note: This movie isn't Christmas related you say?  Well I beg to differ, at time of finishing up this piece (currently 1:45am on Christmas Day) and having just finished wrapping the family's presents in front of the TV, I had to choose between watching a choice of a solid two dozen holiday movie options....or the Shawshank Redemption. I chose the Shawshank Redemption because I am officially all maxed out on Christmas movies, and Andy Dufresne will never let you down on any day of the year.  Shawshank is the holiday cleansing movie everyone needs.

Holy, are you still with us on this post?  It is Christmas day!   Go out and spread some cheer or something (or read the next EV news story which should be coming up in a few minutes - whatever floats your boat!)

Thanks for indulging my dreams of being a movie reviewer; and here is wishing everyone all the best this time of year!