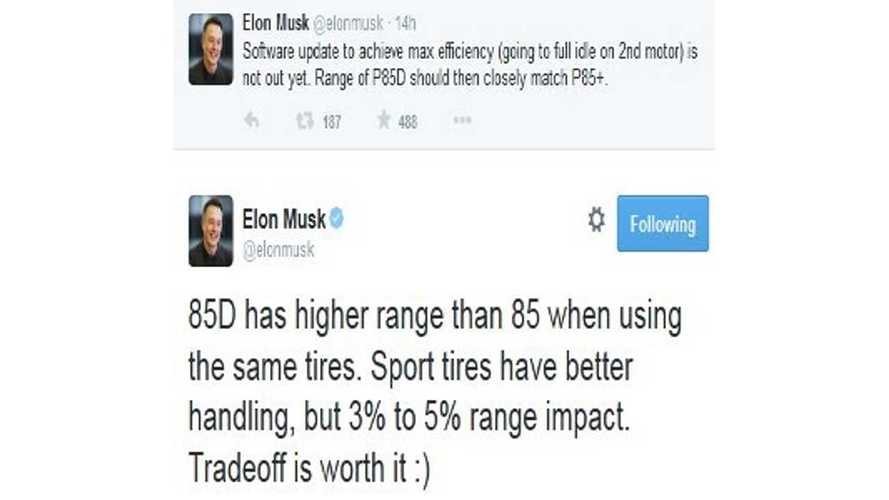 There's apparently enough confusion surrounding the range of the Tesla Model S P85D that Elon Musk took to Twitter to try to iron out some of the details, saying it will closely match the P85+.

As it turns out, the 85D and P85D's performance tires sap range by 3% to 5%.  As Musk claims, if the P85D had the same tires as the Model P85+, then the dual-motor version would actually have more range.

Additionally, Musk adds that there's a software update in the works to improve the efficiency of the P85D.  When that software update gets pushed through, range of the P85D will "closely match" the no-longer-available P85+.  The P85+ had a slight range advantage (~3%) over the P85 due to the use of Michelin tires, as opposed to the Continentals on the P85.

All good, but here is the thing - these tweets were both removed over the weekend.  Luckily, we happened to screen shot them.

Naturally, speculation abounds if it was the EPA (who didn't appreciate the disclosure conflict with the published numbers) or possibly the SEC (who sometimes aren't keen with Twitter being used to break official announcements).  Conversely, it could also be internal, perhaps Mr. Musk's legal/corporate handlers felt the tweets shouldn't be aired, or possibly the company's engineers were not confident with the claims.  Then again, there could be some other unknown reason.

Whatever the reason, taking to Twitter to break news on a product then deleting it later is probably not the ideal sequence of events.

Minor Details Make All The Difference, According to Musk