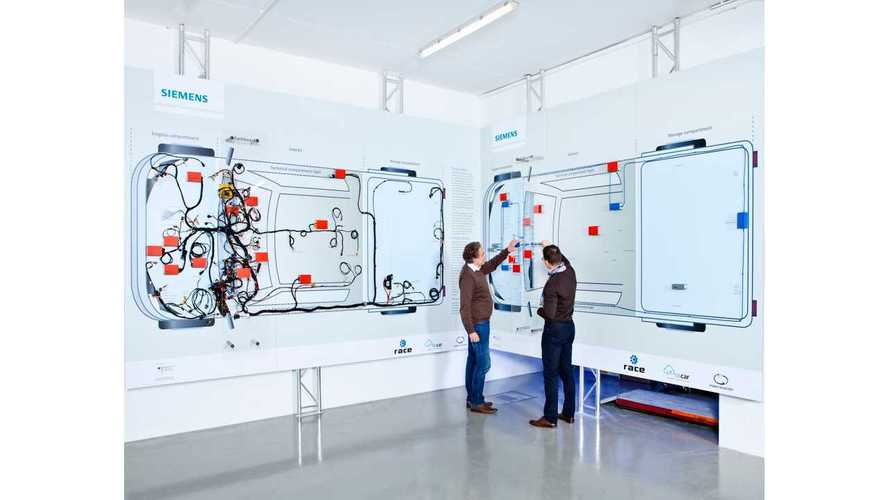 Road to Digital Future: Siemens to Equip StreetScooter Electric Vehicle with Innovative Electronics and Software.
The voltage source is of vital importance to highly reliable systems such as the ScreetScooter. Siemens technicians have to regularly check the voltage source to make sure it functions fault-free.

RACE is new architecture that replaces the entire control system with standard hardware and a kind of "operating system for automobiles." It's similar to a PC's motherboard.

According to Siemens, the switch to RACE will reduce development time for vehicles and then enable for the easy retrofitt of additional functions.

"A modern mid-range car has about 70 control devices installed in it and many meters of cable. There are a larger number of different interfaces and software applications in every vehicle that interoperate without a common software base. Currently the parking sensor, navigation and air-conditioning system, for example, each need their own control device, which is connected to other control devices.

The complexity of this architecture, which has grown over the years, will become less and less transparent and thus hinder innovation. In vehicles with RACE technology, there is now only one central processing unit controlling all functions. These are designed with multiple redundancy for reasons of safety. Development time for new vehicles has now been reduced by up to 30 percent thanks to the new capabilities of RACE.

Technology can also be used for trains and Smart Grids The aim is that new functions should be easy to add in the future as well, in the same way as with Plug & Play on a computer. Today, this is hardly possible. To equip a car retroactively, say with a rear view camera, requires an immense amount of time and effort for testing. The installation and integration of new hardware in the existing communication system is nearly impossible, and the goal is to make this function more easily in the future. Thanks to RACE, tests for new functions can be integrated and performed digitally; new components will be connected to the RACE computer, for example via Ethernet. The component can be used after downloading the new software onto one of the control processors. Since functions no longer need a permanent connection to a control processor, it will be possible to install, for example, new infotainment or driving and assistance functions in the vehicle, ideally just in the form of software.

Less cable and fewer control devices will also have a positive impact on weight, and make cars less prone to faults. Electric cars in particular will profit from this because it increases their range and reduces running costs. The use of RACE is not, however, restricted to cars. The system architecture is also intended to be transferrable to multiple unit trains, smart grids or other complex systems."