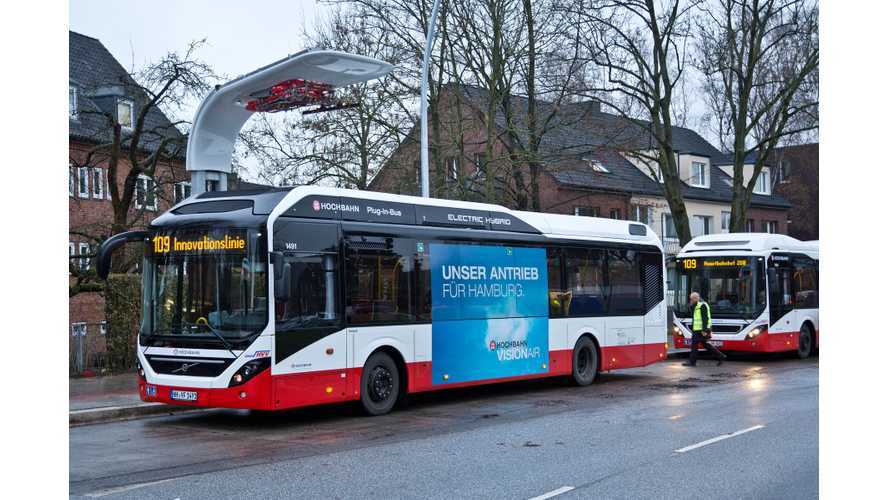 All three now run in commercial service for the very first time on the aptly named Innovation Route 109 in Hamburg.

Different solutions are being tested in Hamburg as the city would like to switch to zero-emission-only buses by 2020.

"The new Volvo 7900 Electric Hybrid commenced scheduled operation in Hamburg on December 18. The starting shot for the innovative bus system coincided with the opening of the Innovation Route 109. The route will be used by the public transport company in Hamburg, the Hamburger Hochbahn AG (HOCHBAHN), to run comparative tests of innovative drive technologies under the strict everyday conditions of scheduled services. The city of Hamburg has established the target: from 2020, only emission-free buses should be acquired by the city."

Buses have 7 km of all-electric range, while the route is 10 km long. Two fast charging stations at the bus stops seem to be enough to do the job. Charging takes just six minutes.

Olof Persson, President and CEO of the Volvo Group stated:

“We are delighted that our new electric hybrid bus will serve the Innovation Route 109.  For us, the electric hybrid bus represent the current peak of our successful cooperation with Hamburger Hochbahn AG. Together, we have reached our shared goal, making public transport more efficient, quieter and more sustainable. We will continue our cooperation here in Hamburg with sustainable, low-noise vehicles.”

About the Volvo 7900 Electric Hybrid:

"With its world-first electric hybrid bus incorporating Euro 6 equipment, electric motor and plug-in technology, Volvo is further developing its electro mobile pioneering role. Charging takes place at the end stop using a pantograph that is integrated with the charging station. When the bus has reached its parking position under the charging mast, the pantograph is lowered to both of the charging bars on the roof of the bus when the driver presses a button. The complete charging process takes only six minutes.

The lithium ion iron phosphate charger provides the electric motor (150 kW) with power. The bus travels at least seven kilometers purely on electricity, before the Euro 6 diesel aggregate switches on. On the stretches driven only on electricity, the bus is completely emission-free and extremely low-noise: Near to a Volvo 7900 Electric Hybrid, the noise level can be compared to normal conversation level.

Volvo Bus Corporation is taking another step forward in the direction of electrification with its Volvo 7900 Electric Hybrid. There is a major interest in the new Electric Hybrid buses from numerous cities, both in Europe and in other parts of the world. Serial production is scheduled to commence early 2016."