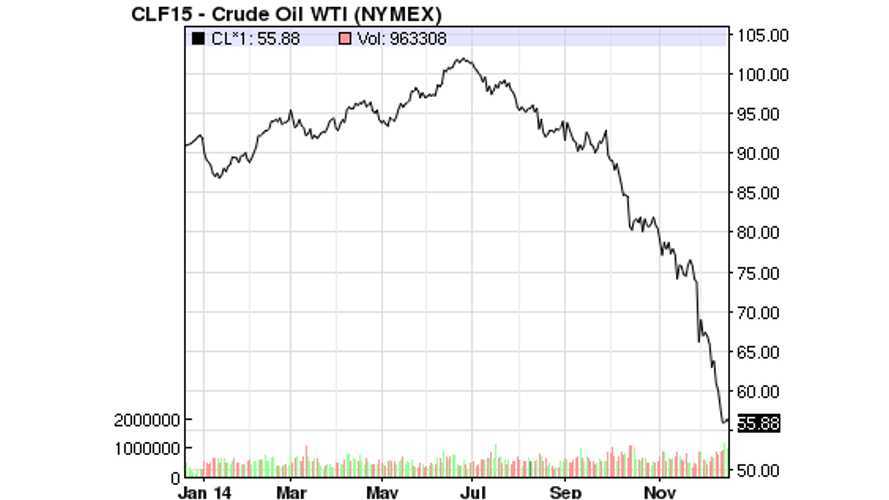 Since I live in the energy capital of the world, I thought I should weigh in with my opinion on the recent oil prices and their effect on the growth of the electric vehicle industry. Strap on your tinfoil hat because I am going to hit the conspiracy theories first.

Let me add the big caveat that this is totally written from a US perspective. I know there are many international readers and local situations in other countries differ greatly.

Most people know, but just to recap, the price of crude oil has dropped by 40% in recent months. The price of crude oil directly related to the price paid at the pump for gasoline, but not exactly equal. i.e. $60 / barrel of oil does not mean $60 / barrel of gasoline. Crude oil has to be processed at a refinery and then transported to the gas station.

For the first time in a long time supply of oil has outpaced demand. This is largely due to recent oil production expansion in North America. OPEC (http://en.wikipedia.org/wiki/OPEC) has also decided not to reduce their own output, which is causing speculation that the low prices will continue to hang around for awhile.

Here is the conspiracy theory view:

OPEC is keeping supply up, forcing the oil prices lower to determine the real cost of North American oil production. The general economic idea is that the companies will stop extracting if they are not making a profit on the oil. The real economics of drilling activity, ramp up, ramp down, asset depreciation, etc. make reality much more complex.

Adding into the complexity, most current drilling operations are a combination of natural gas and crude oil extraction. Natural gas is not as portable as oil, so natural gas tends to have localized (and even seasonal) pricing that is completely decoupled from the barrel price of oil. As natural gas has displaced coal on the US electrical grid, the local demand may support continued drilling activity.  Keep in mind, there is also almost no oil used for electricity production except for Hawaii and Alaska.

So now I will offer an even bigger conspiracy theory:

OPEC is really worried about the electrification of vehicles and is trying to drive down the price of gasoline to prevent the shift to electrification. In reality, the plug-in industry is so small that it is probably not on OPECs radar, but it is fun to inflate ourselves and speculate ;)

Now the part we really care about, what does this mean to electric vehicle sales:

Even with very low gas prices (~$2.00 / gallon), BEVs have a lower cost to operate than their ICE peers. BEVs also have the quiet "luxury" ride, silky smooth acceleration, convenience of home charging, and the green appeal. There is also the group of BEV purists (you know who you are) that will always choose to use absolutely no gas.

The high priced EVs are insulated from the economies of gas for a couple reasons: the buyers are not as price sensitive and the cost of the battery fades as the MSRP goes up.

Ironically the other BEVs that would be affected the least are the compliance cars. These OEMs have to get their CARB credits, so they will do whatever it takes to move them off the lots (great lease rates, unlimited mileage leases, included insurance, and who knows what they will come up with next).

The "affordable" purpose built BEVs will face a little more pressure. They will need to sell based on the benefits outlined above, but might not have the argument of "its a free vehicle if you consider the cost of gas." That is statement I have seen used many times, especially in areas with large incentives.

Finally the BEV variants. They will feel the most pressure on their sales. It is so easy to cross shop Focus vs. Focus EV or Golf vs. eGolf, that any hit to the economics make the comparison harder on the BEV. The OEMs have seemed to take the strategy of differentiating the BEV versions as Eco models. If OEMs chose to make the BEVs higher performance or higher luxury than available with the ICE, I would see the sales being more insulated from oil prices.

The soon to be forgotten Chevy Volt 1.0

I am grouping everything with a plug and a gas tank in here. Since there are so many nuances to the types, please cut me some slack on the generalizations. I am going to hit this topic slightly differently as well. We will look at all electric range (AER), purpose built vs. variant, and luxury/supercars. AER will just scale from high (i3 REx and Volt 1.0) to low (PiP).

PHEVs still have the advantage of (partially) fueling at home, quiet and smooth ride (when operating on electricity), and lower operating costs. Almost all the same benefits exist as in BEVs, just to a lower degree in some cases.

Lets just knock out the slew of luxury/supercars first. There will be little to no effect on the sales of these vehicles. Most of these examples (P1, i8, 918, etc.) use the electric power to increase the performance, and maybe to help meet regulations so they can still sell this category of vehicle.  The production is usually so low, they are often sold out long before production finishes.  Even the Panamera SE and other $100k plug-ins are already selling on features other than the cost of gas.

Let's look at the purpose built (Volt 1.0) vs. a variant (Fusion Energi). Just for comparison purposes, pretend they have the same AER and mode of operation (i.e. full acceleration in electric mode). The variant vehicle is going to get cross shopped with the ICE version more often. This is a benefit to the plug-in version when gas prices are high, and a detriment when gas prices are low. At the critical time of purchase, if a potential buyer can compare sticker prices on identical vehicles, with and without plug, the cost of gas could be a tipping point in either direction.

Finally all electric range (AER). Looking at this factor by itself, in a vacuum.  The longer the AER the less the price of gas matters. The more miles that can be driven on electricity the faster the payback for premium of the battery. The actual MSRP price difference is the other key factor that would be weighed side-by-side with the annual fueling cost. But generally, I think the gas prices will hit the sales of the "20 mile" PHEVs more than any other plug-in. It should hit the PiP the most based on this theory, but it seems that Toyota has never tested the actual demand for the PiP. There has been a continuous inventory shortage and only offer it in limited markets.

I do have a concern that some of the new plug-in entries due to hit the market the next year or two, will face stronger headwind with low gas prices. Let's hope the new OEMs don't throw in the towel after their first effort. If they make great products, the sales will follow.

The Prius Family pretty much defines the word "hybrid"

I am going to be very brief on this one. I am talking about vehicles that market themselves as hybrids and use electric motors to increase their miles per gallon, but only use gas to power the vehicle. The trend is already well documented: low gas prices significantly hurt hybrid sales. PHEVs already pose a significant threat to "regular" hybrids. An extended period of low gas prices could be the nail in the hybrid coffin. The Prius is probably the safest, because of its loyal following and tremendous brand presence. It will get hurt, the rest will get slaughtered.

Toyota Mirai will launch into compliance land in 2015

I will address fuel cells, just to prevent the comment that I forgot them. At this point oil prices have absolutely no bearing on the success or failure of fuel cell electric vehicles. Fuel cell vehicles are really still in the EV1 stage. There has not been a single vehicle sold to consumers. There have been a couple lease and return programs, but no option to fully own. Toyota and others will start the first real test campaign in the compliance markets in 2015. Time will tell if consumers will love them and the supporting infrastructure will flourish.

As usual, feel free to critique my opinion in the comments :)