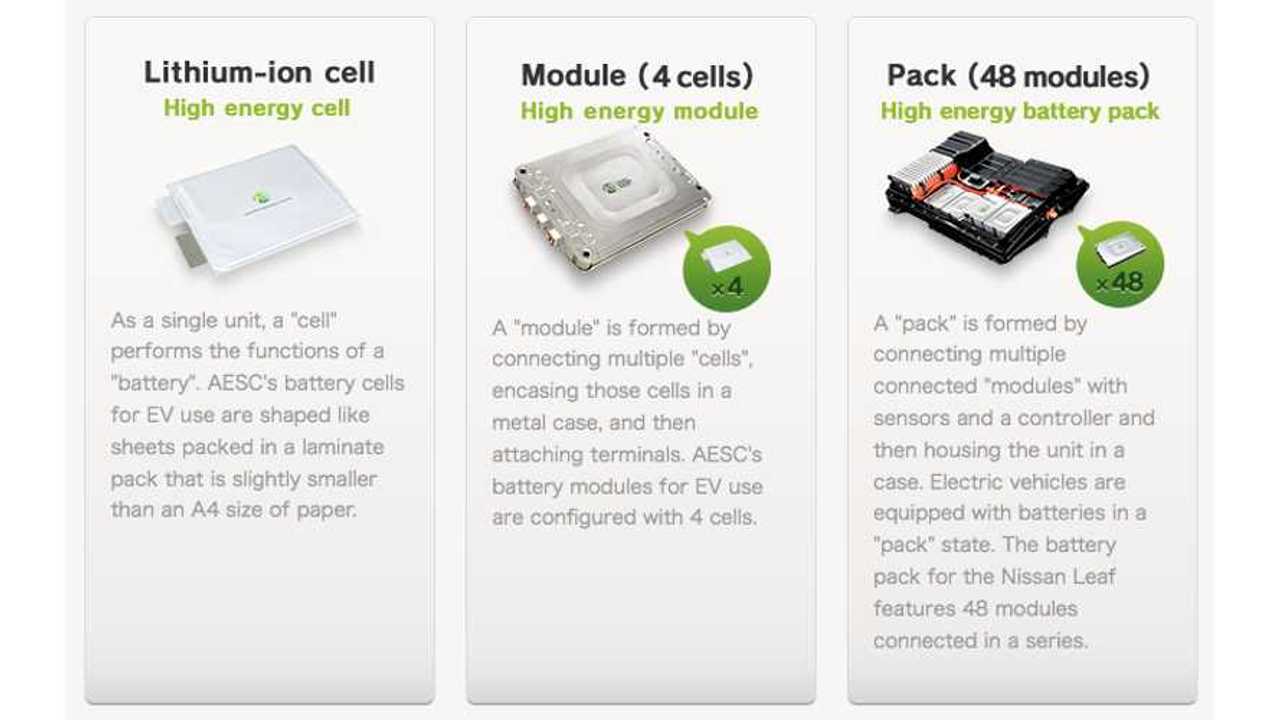 Most of the time when you track down an OEM supplier's site, you get something like, oh, "We make batteries" type of thing, with very little info, but a link to submit your request for specifications.  A little hint - unless you have a project that looks something like SpaceX or your name is Ford or Toyota or something, you're probably not going to get a response.

Not so in the case of AESC, the folks who bring you the Nissan LEAF battery pack among other things.  This site is the last word on the the batteries supplied to the LEAF.  Not that they're going to answer your email inquiry any quicker or anything.

To catch up, do stop by our LEAF battery stories - especially this one where one of these modules is disassembled.  With a macheté.

To start out, go to the AESC page describing the BEV products the company make, and you'll get a great rundown on the LEAF pack with specs and descriptions.

Here's an overview of the complete system.  Pardon us while we go completely nerdgastic:

Voltage, temperature, and such are constantly monitored by sensors attached to the modules in the pack. The data is sent from the battery controller to the vehicle control unit via a CAN (Controller Area Network).

When a vehicle is maintenanced at a service factory, the circuit is interrupted by operating the SDSW (Service Disconnect Switch) so that work can be safely performed.

Now. Hold on, there's more.  We happened to stumble on to the "Cell, Module, and Pack for HEV Applications" link, and learned a little something.  On the Product Introduction page we found this explanation of the difference between packs designed for EVs and HEVs (Hybrid Electric Vehicles):

Good to know, when shopping the salvage yards for batteries for the next motorcycle conversion - go for the HEV packs for high discharge rates. Here's a little more onthat:

Hybrid electric vehicles (HEV) are powered by a combination of an engine and an electric motor. When the vehicle first starts to move and at other times when a large amount of torque is required, the battery pack and motor operate to assist the engine, and at other times, driving energy is recovered and used to charge the batteries. Therefore, emphasis is focused on performance that allows the batteries to instantaneously transfer a large amount of electric power.

AESC's lithium-ion batteries for HEV applications are compact and lightweight and boast of an overwhelmingly high output.

We also found this little reference graph, which will come in handy next time we're in some debate about battery capacity comparisons:

And one last thing.  A great one-paragraph rundown of the common "lithium-ion" chemistries:

Numerous different materials are used including lithium cobalt oxide, which is widely used in cell phones and notebook PCs, and lithium manganate, which is used by AESC, as well as lithium nickel oxide, lithium iron phosphate, and ternary systems that combine nickel and manganese with a base of lithium cobalt oxide.

Some benefits of lithium manganate, which is used by AESC as a cathode material, include (1) the fact that it is safe with a crystalline structure that does not change even in an overcharged stated, and (2) that manganese reserves are abundant and the market price is stable.

There aren't many sites that we'll sit down and comb through every page, but this one's an exception.  Highly recommended, and well worth a thorough read.