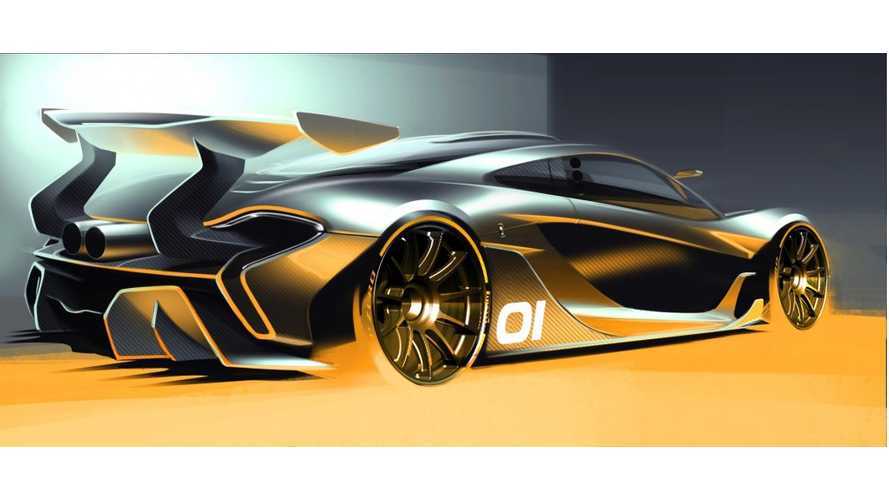 McLaren P1 GTR is a  supercar (or rather track-only race car, based on the regular P1) that intends to be a plug-in.

Its world premiere is scheduled for the upcoming 2015 Geneva Motor Show in March, while sales should begin in late 2015.

According to Autocar, weight-saving and track optimization resulted in 10% higher power-to-weight ratio compared to the standard P1. Power stands at some 986 HP according to previous reports.

"Some technical details of the new car have already been revealed. The cockpit has been stripped out, with a greater focus on driver engagement and weight saving, albeit without compromising comfort or safety.

A new steering wheel based on the item used in the MP4-23, McLaren's 2008 Formula 1 car, is exclusive to the P1 GTR, which was first revealed at the Pebble Beach Concours d'Elegance in August."

For such an extremely fast beast, McLaren is preparing a P1 GTR Driver Program to teach owners how to get the maximum from the car.

"P1 GTR owners will gain access to areas of the McLaren Technology Centre in Woking that are off-limits to the public, including the company's racing simulator.

Paul Mackenzie, McLaren P1 GTR Programme Director, said: "Before they get out on track, each driver will join us at the MTC and have unprecedented access to the cutting edge facilities.

"This will enable drivers to build up a greater understanding of the car’s capabilities and true performance, as well as learning the braking and turn-in points before they arrive at the circuit. It also allows them to analyse and discuss their performance ahead of testing themselves in the real world situation, so they are fully prepared when they take to the track.

"It is a programme that has been developed over the years for our Formula 1™ and our young drivers. It’s not just about fitness, but also about mental preparation, and looks at the full wellbeing of the driver, and prepares them mentally and physically for the activities they will experience on track."

McLaren P1 GTR owners will take part in six track events during the first year of the Driver Programme. The events will take place at "iconic racing Formula 1 circuits across the world".

At each event, drivers will have a dedicated race team responsible for running the car. This will include a personal driver coach and head engineer, who will work through telemetry and video analysis to hone skills, and optimise lap times."

Here is latest official video on the McLaren P1 GTR:

"The development programme for the most powerful and most exclusive McLaren model to-date has been stepped up over the winter months, with the limited edition McLaren P1™ GTR being put through its paces across Europe and the Middle East. Ahead of the start of production later this year, and the start of the bespoke Driver Programme, the track-only model will make its global debut in production form at the 2015 Geneva Motor Show in March."