Ghosn Reddit AMA: I'm the CEO of Renault and Nissan, Ask Me Anything! 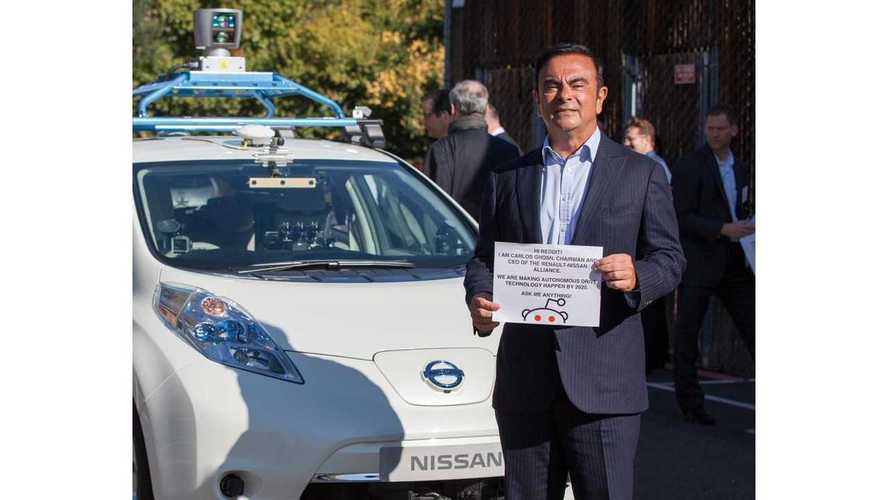 Renault-Nissan CEO Carlos Ghosn opened his Reddit AMA (Ask Me Anything) with this introduction:

I am Carlos Ghosn, the President and CEO of Renault and Nissan. Over a year ago, I made a pledge that we would bring autonomous driving vehicles to market by 2020. We're on track to make that happen. In fact last week, I announced the formation of a partnership between NASA's Ames and our Silicon Valley research centers.

Today, I revealed the new Nissan Titan at the Detroit Auto Show. Go ahead, ask me anything!

We've pulled out the autonomous car questions, and anything to do with fuel cells or LEAFs.  Here's what we got:

How mad r u that Google has you beat?

Ghosn: Google’s approach is vastly different to ours. Their approach is all about surrendering complete control from the driver and using highly precise maps. They may have a financial reason to focus on those maps given their ad products. Our approach is about technology that works where we have maps and even in cases where the map ends.

This is one of the reasons why NASA wants to work with Nissan. For example, if NASA wants to send a rover into a cave, no map exists of what that cave looks like, so the technology has to be able to drive inside, get samples, look around, and then safely exit.

Can you assuage my fears that my self-driving car will have a systems crash that for two seconds means it stops seeing the road, keeps going straight, and sends me to an exciting death?

Ghosn: Obviously, these systems have to be fail safe and able to withstand real-world conditions. Governments will not allow these systems on the road unless we can prove that will be the case. Nor would we want to put vehicles on the market that we are not convinced will meet stringent safety criteria. As to your scenarios, these systems are able to react much faster than a human being.

Also, if you see a dangerous scenario developing, you will always have the option to take over full control of the car. The systems we are developing will always give the driver that option versus self-driving systems that keep control themselves.

At the Stanford Executive Program in July 2011 I asked you whether you had any plans to work on self driving cars and you were fairly dismissive of them. You were also stunned when I said that Nevada had just past laws starting to allow them.

What changed your mind?

Ghosn: That was a really good question then and still is and gets back to something I said earlier about the difference between autonomous drive vehicles, in which the driver remains in control, and self-driving cars, in which a driver is not even required.

The focus of our R&D right now is on autonomous drive vehicles that enhance the driving experience, by giving the driver the option of letting the car handle some functions and by improving the car’s ability to avoid accidents. That technology exists already and will be rolled out in phases over the next several years.

We are not dismissive of self-driving vehicles, but the reality is the timeline for them is much further out into the future.

Hi Carlos, I'm a die-hard Datsun/Nissan fan that is very glad to see how well the company has done with you at the helm and hoping to see many more years of continued success. My question is how you see hydrogen fuel cells playing a part in electric vehicles and if Nissan/Renault are investing, or planning to invest, in this technology directly or through partnerships?

Ghosn: Thank you for your trust.

We are actually developing the technology and prototype of fuel cell cars. The only divergence is when they'll be ready for mass market. We think it's too soon.

They're too costly and the infrastructure is far from being ready. But it's a very promising technology.

What do you see as the bigger barrier to widespread use of autonomous vehicles, regulatory issues or customer acceptance?

Ghosn: You have different waves of autonomous drive. To make it simple, wave 1 is valet parking, wave 2 is autonomous driving on a highway without passing. Wave 3 would be city driving.

As lab partners go, NASA is hard to beat. From Nissan's point of view, what areas of research will this partnership benefit? CES showed how competitive this field is - do you expect collaboration with NASA to give you the edge? And if so, how?

Ghosn: First, yes, we expect that collaboration with NASA will give us an edge. The main domain of collaboration is going to be technologies about remote control, where NASA is second to none.

Second, there are the technologies and know-how they have in terms of human-machine interface, and human systems interface. NASA has an experience and knowledge second to none.

Third, NASA has a research center with a proving ground and they opened this campus to our cars. We will be able to test our cars in real life on their proving grounds.

On top of this, there is the excellence of their engineering that will also us to work together on issues related to autonomous drive.

Hi, cheers from Norway. The Nissan Leaf is selling like crazy here and can be seen everywhere. A good reason is probably the large tax reduction electric cars have. How is the sale in Norway compared to other countries in Europe and US?

Ghosn: Norway has, relative to the size of its market, the largest penetration of zero emissions vehicles. We're very happy that the Leaf for Nissan and the Zoe for Renault are becoming very popular in Norway.

Ghosn: From time to time on a specific technology, companies can benefit from marketing/information halo. If you asked people today, what's the best-selling electric car, many will say the Tesla. But really, it's the Nissan LEAF -- by far. Because of Tesla's marketing strategy, it's more visible to the public. They appear to be the leaders.

Apparently Ghosn was pretty much overwhelmed by the volume (4000+ questions and comments) of questions, and even went back the next day to answer what he could.