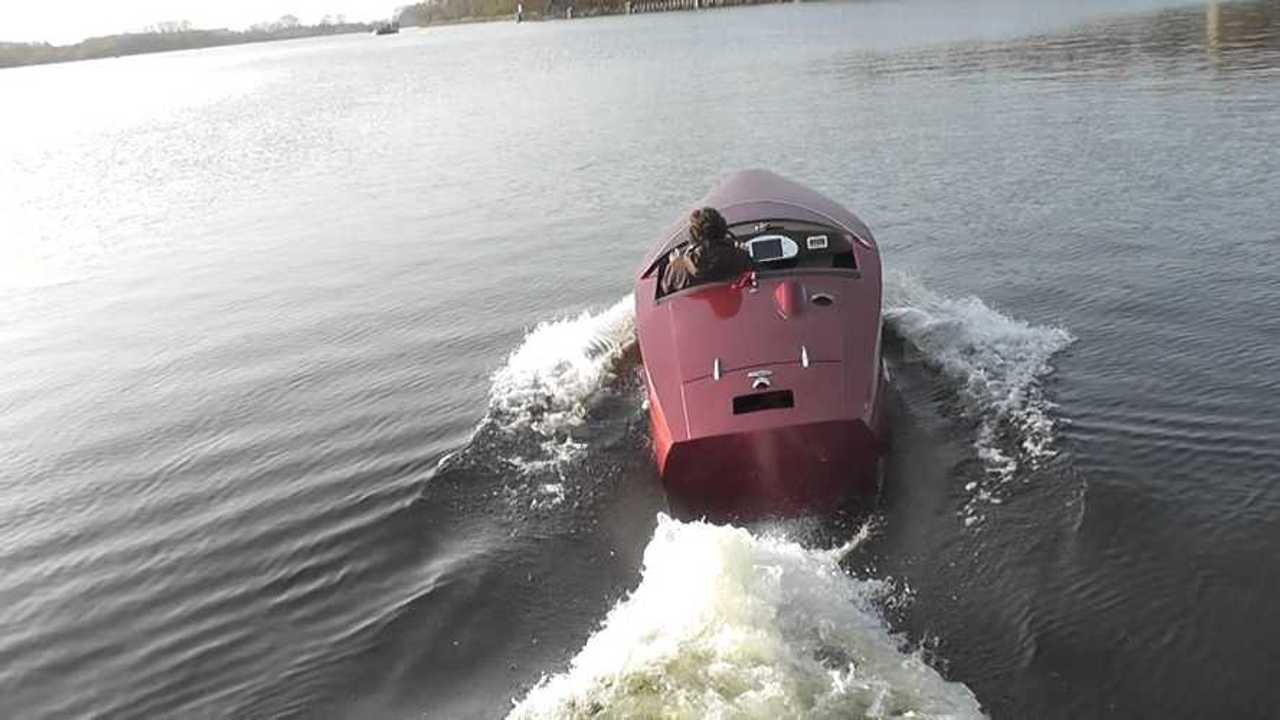 That was the shot that got our attention.  But this was the boat that really made us lust:

How could this not be a complete and total blast?  Ever taken a ride on a fast boat?  What's the one thing you remember, other than going fast?  Right.  The mind-numbing ear-splitting roar of a straight-pipe big motor belching gas and oil into the water.  This is all that, without, well, all that.

These vessels are the work of a firm based in Amsterdam called New Electric.  The company does a lot of things, but it's all centered around electric conversions, and we're guessing that since they live in a place that's surrounded by water, boat conversions were a natural.

We wanted to meet these guys simply because of this shot on their splash page. Think they look like a fun bunch of guys?

Electric drivetrains for marine applications are far from new, considering many very large boats and submarines are run with electric motors - however, many of them are "hybrids" - diesel generators making the electricity, typically called diesel-electric drive.  Putting a small electric drivetrain into a speedboat, however, is a fairly new idea.  Considering you want to run high RPM, that would mean you want to run high voltage, and high voltage surrounded by salt water is a combination that will get, and keep your attention if you know what's good for you.

The company has converted three boats so far, according to the website, but the Silverback is, to our eyes, by far the prettiest.  And yes.  You can say "pretty" when talking about a boat.

The story of the conversion, with photos is here - don't miss it.  Here are some snippets from that page:

New Electric Silverback started life as the NedCraft Silverback. Built in Amsterdam in 2007, based on the original Bootlegger -The 1920 'Palm Bay runabout' by Nelson Zimmer- this craft originally Sported a 130 HP Volvo D3 Diesel, and was intended to launch a new brand of boats: the NedCraft.

With the advent of the financial crisis in 2008, and with lack of (international) exposure it became apparent this was not to be, and for several years the Silverback languished on dry land, tucked away in a warehouse.

Then in 2013, while the New electric team was looking for a boat suited to the tastes and needs of our prospective customer -Frans Heijn of Admiraal Hein electric saloon boats in Amsterdam.  It was Raymond who stumbled onto this fine craft and in the weeks following all of us, including Mr. Heijn fell in love.

Yeah.  That goes for us too.  Here's the whole story of the conversion in video form:

...and the best part is learning we're not the only ones who giggle like little kids when out on the water.

Here are the specs: