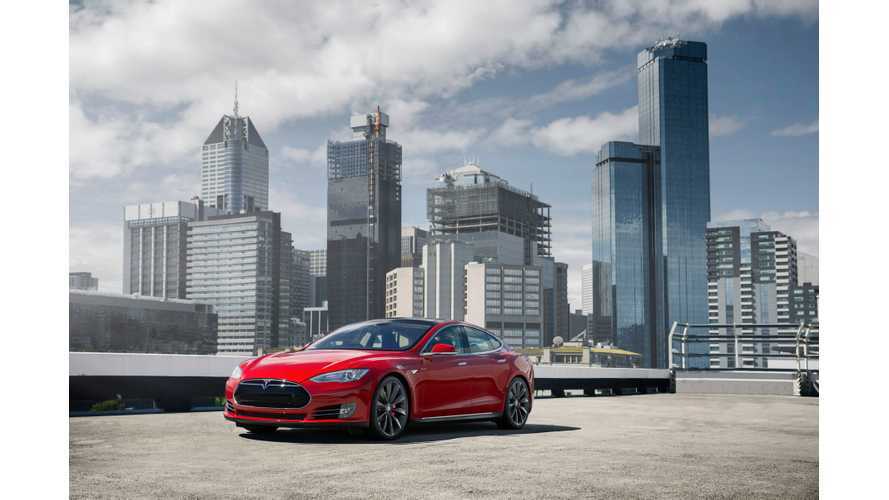 Significant is that the Model S beat incumbents cars like the Mercedes-Benz S400L, Mercedes-Benz E300 Bluetec Hybrid, and BMW 435i Gran Coupe.

Model S is the first all-electric car to win one of the categories (by a unanimous verdict).

"Tesla's Model S made history even before it was judged. Just being considered good enough to be a finalist in Drive's Car of the Year awards was a breakthrough for an electric car."

The Mercedes-Benz E300 Bluetec Hybrid, which won this category last year, wasn't strong enough to retain its title against Tesla due to "grumbly diesel soundtrack at low speeds and the clunky way the stop-start system operated".

Tesla shines, despite this not even being the P85D:

"In all the key areas - under the bonnet, on the road, value, etc - it impressed the judges.

Indeed on the performance front the Model S stunned the judges, recording the second fastest 0-100km/h time of all 42 cars on test (4.4seconds) beaten only by the supercharged V8 HSV Maloo GTS.

And while range remains the Achilles' heel of electric cars - with most on the market offering between 150-200km - the P85+ has a claimed range of 502km, making it a practical alternative to an internal combustion engined car the majority of the time.

The Model S also impressed the judges with the rest of its design. Having been designed from the beginning as an electric car Tesla has been able to free up more space for passengers and luggage.

The interior is completely contemporary in style, with a 17-inch touchscreen controlling all of the car's aircon, navigation and entertainment as well as other vehicle settings (lights, charging, etc). But there are other nice touches, like the proximity key and in-seat sensor that does away with the need for a start button - simply get in and the Model S is ready to go.

Unfortunately the seats themselves were not to as impressive, being criticised by the judges for lacking support but also offering average ergonomics for some.

But the Model S won points back for its 924-litres of boot space - split between a 744-litre rear boot and 150-litre front storage space.

The Model S also did the other important elements of a luxury car right - it rode comfortably and steered well.

The powerful regenerative brakes (which can be adjusted) took some acclimatisation but judges were soon happy with the way the Model S stopped, some even managed to drive a long time without even touching the brake pedal.

"Once you get used to it it's amazing," said one judge of the brakes."

"The fact that it works ," summed up one judge. "It works in the real world. It's not some motor show concept."