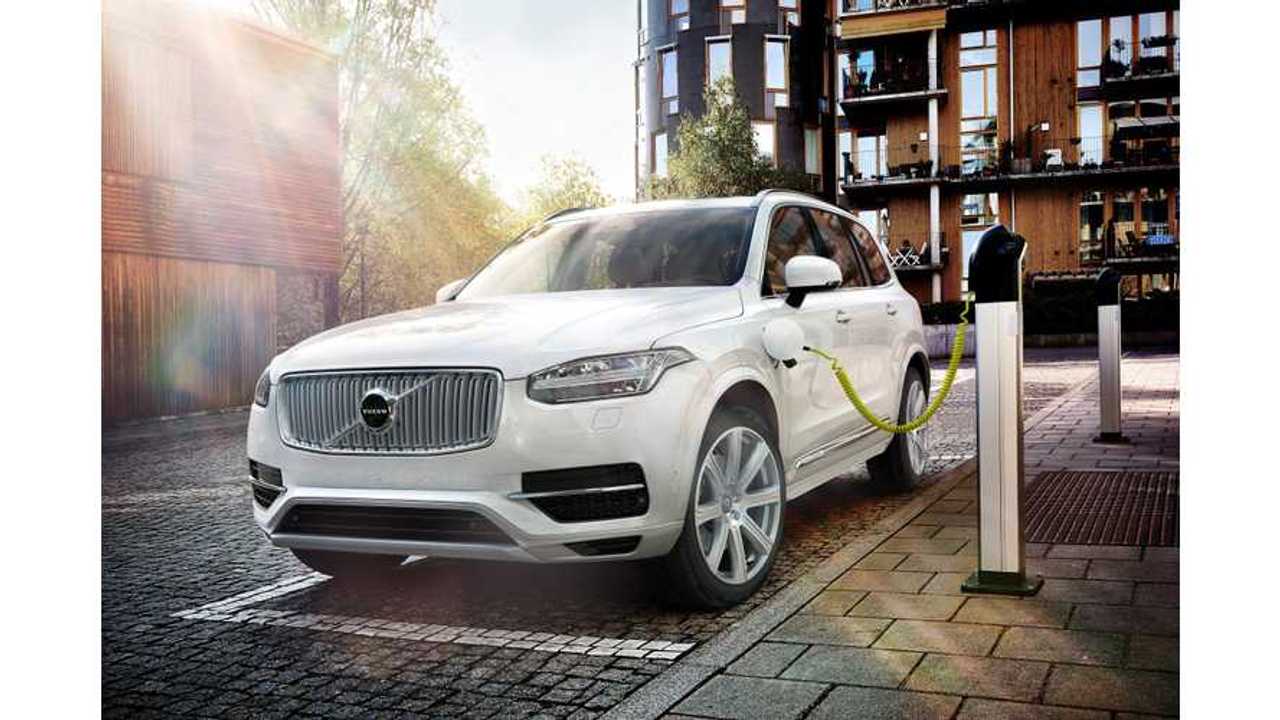 The latest Swedish plug-in hybrid was recently shown at the 2014 Los Angeles Auto Show and attracted a lot of interest. Volvo states that in XC90 T8 Twin Engine, you will not find compromises in performance, driving pleasure, efficiency or even luggage space.

“The XC90 T8 is a plug-in electric car, hybrid car and high-performance car rolled into one. The Drive-E engines already offer highly competitive performance versus the competition. The T8 takes it further into a leading position.”

Volvo XC90 T8 Twin Engine is based on the new modular Scalable Product Architecture (SPA) platform. Electric motors and internal combustion engine in total have 400 hp and 640 Nm of torque, which is enough to reach 100 km/h (62 mph) in 5.9 seconds.

Electric motors seems to be supplied by Siemens.

Driver can use one of the five driving modes using either a scroll wheel on the center console or a touchscreen on the dashboard:

Hybrid: This is the default mode, suitable for everyday use. Here, the vehicle will automatically alternate between drawing power from the 2-litre, 4-cylinder Drive-E engine and the electric motor to deliver the best overall fuel consumption.

Pure electric: In this mode, when the high-voltage battery is fully charged, it serves as the car’s sole energy source, powering the electric motor over the rear axle. The XC90 T8 has a range of up to 25 miles using just electricity, which covers the total distance most people drive in one day. And thanks to the regenerative braking system, this mode is super-efficient in the stop-and-go traffic of city environments. If more power is needed, the Drive-E combustion engine starts up automatically.

Power mode: Here, drivers get the combined performance of the combustion engine and the electric motor. On start-up, the SUV takes advantage of the electric motor’s superior response and instant torque curve, while the combustion engine gets up to speed. This combination offers better torque at lower revs, equivalent to that of a large displacement engine like the V8.

AWD: This mode offers constant all-wheel drive on demand. The advantage of being able to select AWD manually is that the driver can use it when needed, or choose to save energy for later.

9.2 kWh battery pack is large enough to offer up to 40 km (25 miles) in the pure electric mode under NEDC conditions (expect less in the real world).

Electric motor (60 kW/82 hp, 240 Nm of torque) propels the rear wheels, while most of the job rests on the 318 hp and 400 Nm of torque ICE in the front (combined with 8-speed automatic gearbox and 34 kW crankshaft-mounted starter generator (CISG).

A specially modified version of the 4-cylinder Drive-E petrol engine is under the hood. Already known for its ability to more efficiently deliver the power of an engine twice its size, the Drive-E engine is enhanced in the XC90 T8 by a supercharger and a turbocharger for a total power output of 318hp and 400Nm torque.

The 8-speed automatic gearbox has also been specially adapted for the hybrid: shift-by-wire technology allows drivers to control the transmission electrically (a luxurious touch is the gearshift is made of handmade Swedish crystal). A larger oil pump provides the necessary lubrication during electric drive and enables quicker pressure build-up when seamlessly going from electric to combustion drive.

The crankshaft-mounted starter generator (CISG), located between the engine and the gearbox, performs three important functions: it is a powerful, 34kW starter motor that allows the car to go from pure electric drive to combination combustion drive seamlessly, so drivers can experience the car’s petrol engine and electric motor as one unit; it is also a powerful electric generator; and finally, it acts as an electric engine booster, working with the supercharger and turbocharger when extra power is needed, providing up to 150 Nm of extra torque.

Delivering 82hp (60kW) and 240Nm torque, the large electric motor sits on the rear axle and drives the back wheels in electric and power-boost modes. The rear placement is significant because it allows for a larger motor, which is useful for following stop-and-go city traffic rhythms. This placement also makes efficient all-wheel drive possible because each axle has its own power source.

The XC90 T8 blended braking system partly uses brake-by-wire technology to recover and transmit energy back into the car, either to recharge the battery or for immediate use. The system is also equipped with a unique stability function that controls the amount of energy that may be safely regenerated.

Small battery pack is compact enough to not take any trunk or passenger space.

The high-voltage (270–400V) battery, delivering 65kW of power, is an excellent example of Volvo’s success with the XC90 T8. While other carmakers have struggled to combine the bulk of a battery pack with a luxurious and spacious interior, Volvo has managed to overcome this challenge by placing the battery centrally in the tunnel of the car. There are several advantages to this position. For example, the battery does not impact the amount of available space inside the car. This means that there is room for three rows of seats – plenty of space for people and luggage. Furthermore, the battery placement gives the SUV a low and central centre of gravity, making the XC90 T8 easier to handle and safer to drive.

The unique cooling system is composed of two extra circuits. The first cools the CISG and the large electric motor on the rear axle, while the second cools the battery in one of two ways: either passively, via the radiator, or actively through integration with the car’s climate system.

For convenience and efficiency, drivers can pre-condition the XC90 T8’s drivetrain, battery and cabin, either directly from within the car or by using the Volvo On Call mobile app. This ensures that, whether it’s freezing or hot and humid outside, the car will be heated or cooled as necessary and ready to go by the time the driver enters. Pre-conditioning can be done while the car is plugged in, which is beneficial from a CO2 perspective since it ensures that the battery will last as long as possible in Pure Electric Drive mode.

A heritage of innovation

As the world’s most powerful and cleanest SUV, the XC90 T8 joins a long list of Volvo Cars innovations designed to create a more comfortable driving experience, a cleaner environment and safer roads.