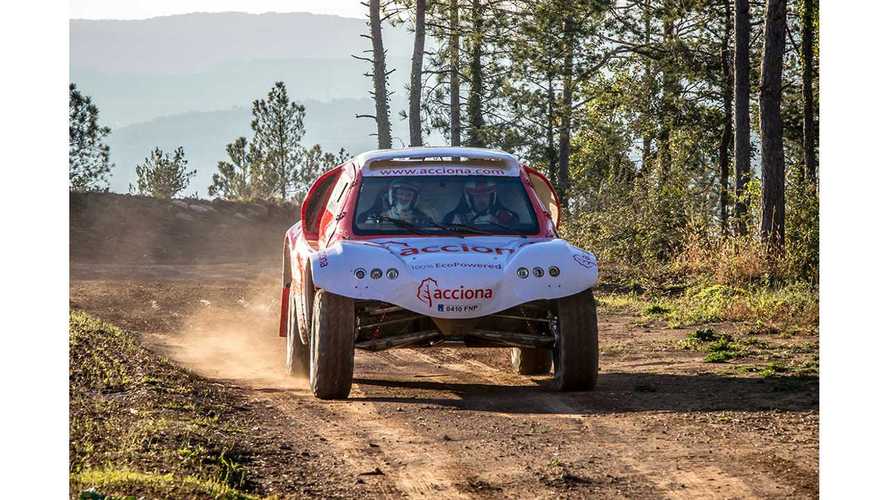 Spanish company ACCIONA announced its EV entry in the 2015 Dakar Rally, which starts on January 4, 2015.

The vehicle, which was developed for two years by a team of over 20 people, will be the first ever in the 37-year history of the Dakar Rally to be powered solely by the electricity. No range extender at all.

"With this electric car, ACCIONA completes its trilogy of 100% EcoPowered vehicles that began in 2011 with its sled that reached the South Pole propelled only by a system of kites and continued its march forward in 2012 by participating in the Vendeé Globe, on board a sailboat that completed a solo, non-stop, round the world trip, without using a drop of fossil fuel.

"It will be the first time in its 37-year history that Dakar registers a 100% electric car. Dakar is considered the toughest test in the world for a car, with a distance of over 9,000 km and where the average consumption expenditure per participant is 2,250 litres of fuel; and ACCIONA 100% EcoPowered will not emit a single CO2 particle.The race takes place between the 4th and 17th of January in Argentina, Bolivia and Chile, where ACCIONA is present with Energy and Infrastructure, and Water divisions."

To be able run from one checkpoint to another, the team will use four 35 kWh battery packs (total 140 kWh), each of which can be swapped for a fresh one. Total range in the race should be 350 km (almost 220 miles).