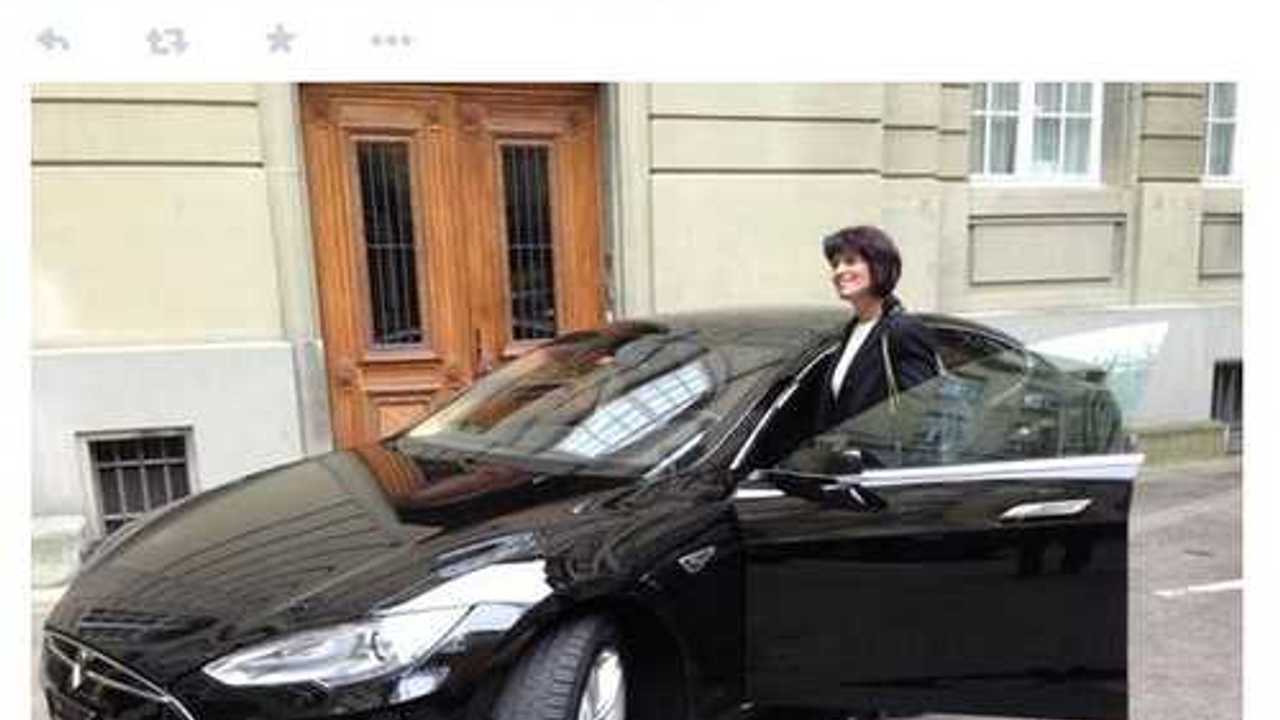 Her name is Doris Leuthard.  Her official position is Switzerland's Head of the Federal Department of the Environment, Transport, Energy and Communications DETEC.

And she's now the proud owner of a Tesla Model S.

Head of the Federal Department of the Environment, Transport, Energy and Communications DETEC

DETEC's strategy focuses on the principles of sustainable development, which are implemented in terms of policy in the fields of the environment, transport, energy, communications and spatial development. As head of DETEC, Federal Councillor Leuthard is in charge of the seven federal offices (ministries) that make up the Department and that work together to achieve the Department's aims, which include environmental and economic interests and public service requirements.

Before taking the helm of DETEC on 1 November 2010, Federal Councillor Leuthard was head of the Federal Department of Economic Affairs (FDEA) from August 2006 to October 2010. During this time, she was responsible for the labour market, vocational education and training, technology, innovation, agriculture, housing, national economic supply and trade policy. She represented Switzerland at international organisations including the WTO, OECD, FAO and the World Bank and chaired the EFTA Council. In 2010, Doris Leuthard was President of the Swiss Confederation.

From 1999 to 2006, Federal Councillor Leuthard was a member of the National Council representing canton Aargau. From 2004 to 2006, she was president of the Christian Democratic People's Party. During her time in the National Council, she was a member of the following committees: legal affairs, political institutions, judicial, economic affairs and taxation.

Born in 1963, Doris Leuthard studied law at the University of Zurich and completed language and study courses in Paris and Calgary. She was a partner in a law firm. She is married to Dr. Roland Hausin.