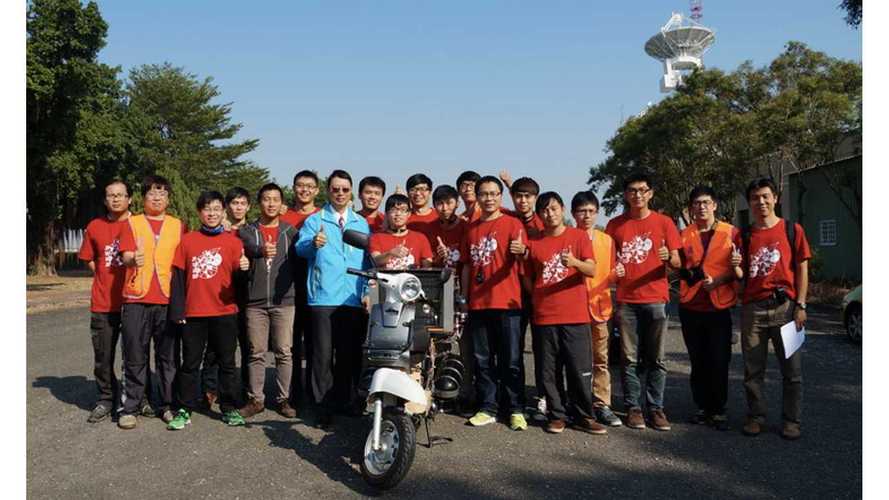 The National Cheng Kung University (Taiwan) has announced the successful test of its (soon-to-be-winner-of-the-InsideEVs-Silly-Scooter-Contest-of-2014) hydrogen fuel cell powered scooter, with a maiden voyage of 80 km.

Why a hydrogen fuel cell powered scooter, you may ask?  So may we.  Here's a bit of an explanation:

Dr. Lai said, the “Pegasus One” is upgraded from the original electrical scooter to the current hybrid power combining fuel cell and lithium battery.

He also said, the overall vehicle structure is revised, especially its power and monitoring system. Fuel cell is added to enhance its range with multiplying electrical capacity by charging battery from fuel cell.

The vehicle has added a 3-kW Ballard fuel cell and two high pressure hydrogen storage cylinders to the vehicle to build a power system that runs by transmitting hydrogen energy to electricity via the fuel cell, according to Dr. Lai.

He also added, because the high efficiency of fuel cell as well as the clean energy of hydrogen, only water moisture is exhausted to the atmosphere, and it is almost zero emission vehicle with a high performance.

This concept is similar to the Toyota FCV, the hydrogen is supplied from two high pressure (up to 300 bar) bottle with 6.8 liter fabricated by carbon fiber reinforced plastics with safety approval, and the bottle of FCV is even as high as 700 bar, Dr. Lai said.

There's a discussion on the comparisons between fuel cells and BEVs here on ChargedEVs.

Want to learn more about how fuel cells work?  Check out the Naked Science video here:

Cool though this project may be, and all good kudos go the the student team, this isn't really new.  As far back as 2006, we first saw a hydrogen fuel cell powering the ENV H2 fuel-cell motorcycle: