Musk At NAIAS: Bolt Is Significant, Volt Is No Threat. Sales In China Weak, Rising In US 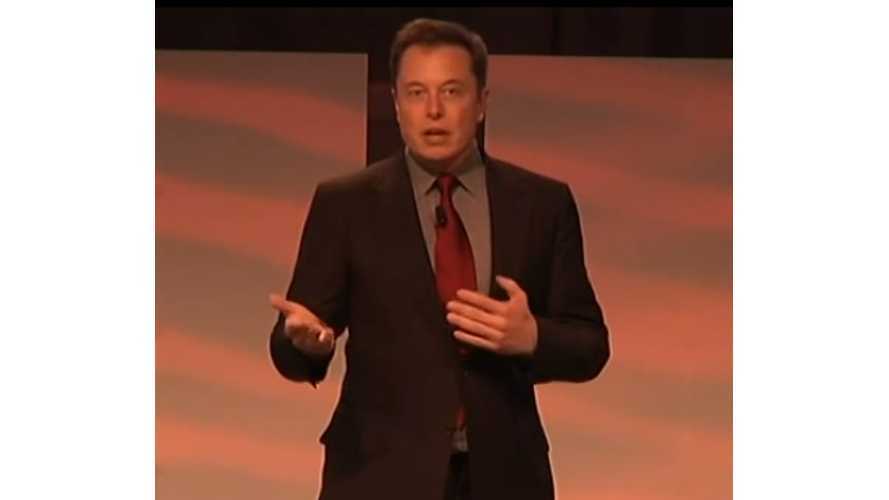 Elon Musk took to the stage to discuss the electric car business on Tuesday night in Detroit at the NAIAS.  He ended up doing that and a while heck of a lot more.

The talk ran quiet long, so much so that the Tesla CEO started on the "Automotive New World Congress" main stage for about three quarters of an hour before breaking to a sub stage for another 45 mins.

Here are some highlights of interest:

On General Motor's introduction of the Chevrolet Bolt, a compact utility vehicle with 200 miles of range that should be in production and out to all 50 states in 2018 (full details here):

Known for his distain of limited range/limited use EVs, Mr. Musk had some praise for GM and their CEO for this electric offering, saying he was pleased to see Mary Barra on stage while noting that it "sounds like they are going to do something significant with the Bolt."

On The 2016 Chevrolet Volt, which arrives this fall - complete with more traditional styling and 50 miles of extended range (full details/specs here) :

As a true believer in an all electric car future, the Tesla CEO's reaction was fairly predictable, saying that he "doesn't see it as a competitive threat because I think that all cars will go electric...if you define the set of competitor car's that are electric, then sure its a competitor but that is not what we see."  Adding to the thought, Musk stated that over there are over 100 million cars and trucks made every year, so that it really wasn't about competing against "few hundred thousand cars" that are electric today.

Later, Musk was asked if Tesla had learned anything from the Volt (or other cars) on the road today.  He replied he had not.

The Tesla boss was asked about profitability and sales, and unfortunately for the after-hours stock price, the those topics came up early, and his answers wasn't what investors wanted to hear...meaning all the beat-writers went to press with a tasty sound-bite to write about during an impromtu 15 minute break between discussion stages - sending Tesla shares down up to 7% in extended trading (live quote here):

As for overall profitability, the Tesla CEO was asked when they need to start showing profit.  Musk said that need will arrive "probably when the Model 3 is in production. " Musk says around 2020 when they have a half-million cars in production.

Musk admitted that "China was unexpectedly weak in the fourth quarter," but noted that they understand the problems and that they will fix "China issues."  The problem?  Tesla's communication with the Chinese population over the charging of the Model S - specifically that it was thought to be difficult to do and to travel long distances.

Musk says that kink has now been worked out and that the company is seeing a "uptick now".

On Europe environment and sales:

Musk said the Supercharging network almost covers Europe and that he sees a factory there at some point, but we still get the impression that sales where kinda 'meh' in the region.

Although he said that Tesla was seeing "growth in all our markets in Europe" and "was excellent", it was also noted that sales "would probably" go up in 2015.  Given what we know of Europe sales through the first 11 months of the year (especially ex-Norway in Q1 & Q2), it wasn't a ringing endorsement of confidence in the market that by most accounts (and forecasts) has well underperformed expectations in 2014.

On US and overall sales:

Little bit of confusion over the quote itself and Musk's thought process, but the Tesla CEO said that the company's "aspiration was to deliver 33,000 cars in 2014" and that "we sold in terms of orders of cars far more than that."  Musk also noted that US orders were "rising" but didn't not elaborate further.  We suppose we will have to wait until the Q4/FY report in February to finally nail down Model S orders for 2014.

On Model X and its delay(s):

"I think I have an issue with punctuality..trying to recalibrate a little bit."

Musk did underline the fact that the Model X would launch "for sure" this summer, despite the production-intent Model X prototypes still being a no show at the NAIAS this year.  Later, he underlined the vehicle is sold out for 2015.  (Also of note: Tesla is offering the X in 60D, 85D, and P85D options currently)

Random other points of interest: