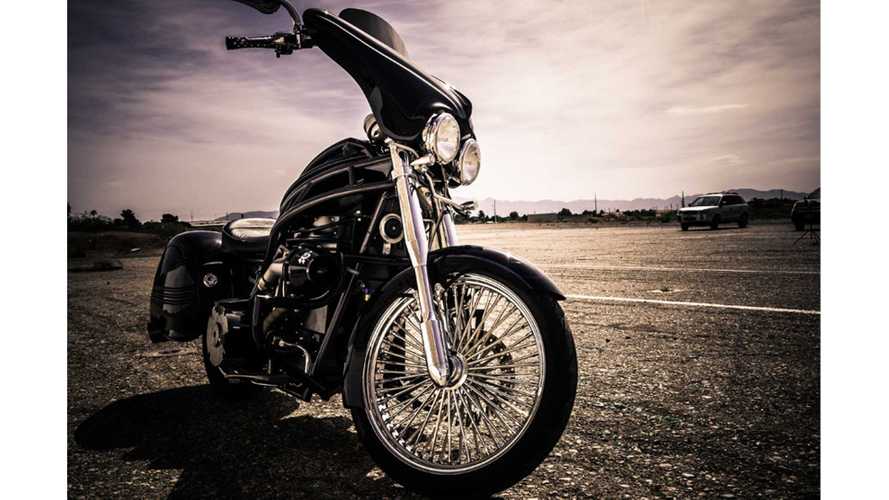 Continuing our introduction to electric motorcycles, let's look at what makes it go:  the drivetrain.

The "drivetrain" on a gas bike is, well, the motor.  On an electric bike you can break it down a little it more.  You have the batteries, the motor, and the motor controller.  It's really tempting to try to reason this out by analogy if you're coming from the world of internal combustion, and you can, but it's not quite the way you may think at first.  The gas in your tank doesn't really correspond directly to the electricity in your battery pack.  Your gas motor makes power, and is rated for power differently than an electric motor, and the temptation to compare the function of an electric motor, in delivering the power, to a gas motor is kind of wrong.  Here's how that works.

Let's start with the motor.  A basic electric motor is remarkably efficient at taking electrical energy and converting it into motion, running between 80-90%.  There are a whole host of reasons for this, but most of it gets down to the simple fact that there's only one moving part and it's driven by magnetic fields.  With a gas motor you're mixing air and fuel, you're pumping it into a cylinder, you're compressing it, igniting it, and taking that linear impact and converting it into a circular motion.  Don't forget exhausting the spent gasses and getting ready for the next cycle.  If a gas motor gives you 25% efficiency, it's a miracle.  An electric motor simply creates an series of electromagnetic fields which, quite literally, push the output shaft around its axis.

The power rating logic of electric motors is significantly different from gas motors, and a huge source of consternation and confusion in the minds of gas engine fans.  Mostly the reason for this is that electric motors come from the industrial application world, and what you really need to know is what power a motor can handle continuously, almost forever.  Think about the motor in your fridge.  It trips on, runs for a long time, then shuts off, and when the engineer designed it he picked a motor that was the smallest he needed that could handle the load indefinitely, without failure.

Because a gas motor delivers power at its peak, and that power is optimized using a transmission, gas motors are rated at peak numbers.  This is especially true in automotive and motorsports industries where manufacturers are trying to make their products look as good as they can.

Besides that, the practice is to rate an electric motor in Watts, and a gas motor in Horsepower.  That's fine, since they both describe power (Power = RPM x Torque, basically) but when people talk about the "Horsepower" of an electric motor it's a little confusing.  Are they using it like we use it in the gas world, suggesting the peak power, or are they simply converting the electric world's "continuous" Watt rating to mechanical Horsepower?  We like to keep it simple.  When we're talking about electric motor power ratings, we don't use the term "Horsepower" at all.  We use a Watt rating, and specify whether the rating is for peak use or continuous.  The Emrax we're looking at for our dream bike build, for example, is rated at 100kW (kilowatts, or a thousand Watts) continuous, and 200kW peak.

The analogy that works with electric motors is to think about them like the piston and the cylinder - combined to give you the "displacement".  A bigger motor gives you more power, and can handle more stress, heat, and abuse, and in both the electric world and the gas world "there's no substitute for cubes" (cubic inches, for you non-gearheads.)  Even at that, it's not a great correlation.  Remember, the electric motor rating is about the load it can handle, rather than the power it's putting out, and it means, "this motor can run indefinitely if you're pulling 100kW from it", not, "this motor can make 100kW".  An electric motor can literally "make" whatever power you feed it, until, of course, it blows up, which can be hours, years, or merely seconds.  For a clear picture of an electric motor's power output you have to look at the graphs the manufacturer supplies for that motor.  It's a range, not a number.

For a complete discussion of common types of EV motors and how they work, check out: EV NerdGasm (Part 1): Basic EV Motor Types

Simply, you control the speed and power of an electric motor with the motor controller, also referred to as the inverter, (but only with an AC motor).  These are also called ESC, or "electronic speed controllers", and they control two basic things that drive the motor: volts, and current.  Volts (think water pressure coming out of a garden hose) make the motor spin.  Current (or amps, think the water volume, or flow in the hose) give that spinning some force - or torque.

Read more about all this on our controller post (EV NerdGasm Part 2: Basic EV Motor Controllers) but the analogy that works pretty well here is this is everything else in your gas motor other than the cylinders and pistons: it's your intake, your fuel injection or carb, your valves, and even your exhaust. The controller takes the energy and feeds it to the motor, much as all those parts and components take the gas and make it explode.

Technically, this is wrong, but it's still a useful way of looking at it.  (Why is it wrong?  Gas is stored energy.  Electricity is energy.  With a gas engine you're actually converting the stored energy into mechanical energy when you burn it...  With an electric motor you're taking energy and converting it into motion - again, what the cylinder and piston part does.  ...a little pedantic, but we know you EV guys reading this are keeping score.)

The bottom line, though, is that your motor controller allows you to dial in the power delivered to the motor over the entire range of RPMs.  It also has some very sophisticated add-ons that allow it to monitor and control virtually every aspect of that motor's operation.  That's kind of a clever thing, especially when you consider how a cutting edge motorcycle's VCU (Vehicle Control Unit) works, and how you can interface the two systems.  This is probably the one single thing in the field that will have the biggest impact on the rider's control and feel of bikes in the near future, as the industry learns more about integrating the motor control with the bike itself.  Probably the most sophisticated use of this right now is on the Energica EGO - read more about that here.

Your battery pack is pretty loosely comparable to your gas tank, with a couple of caveats.  First, though both store energy, a battery pack is much more important in the way that energy is delivered than a gas tank is.  In that aspect, it's better to consider different types of batteries as different types of fuel - kerosene vs. gasoline, for example.  A high power pack (like gasoline) can deliver more energy faster.  You also need to consider the energy density in a battery pack.  Continuing the example, gasoline packs more energy into a smaller package than kerosene...  likewise NCM lithium packs more energy into a smaller space than, say, lead-acid.  Want to geek out on batteries?  See EV Nerdgasm: Batteries (The CBRe Dream Build, Next Chapter)

Just to keep the battery question from being simple, it's a combination of probably the fastest-moving aspect of electric vehicle technology in general, there are a huge number of considerations in evaluating battery attributes, your vehicle is pretty much "battery agnostic", in that a newer, or larger pack can be substituted and adapted fairly easily, and, of course, there's just an overwhelming bunch of information noise out there about the latest and greatest new technological development in battery chemistry.   It can be tough to sort it all out.

The one thing you can be certain of is that the latest, greatest model of whatever you're looking at is going to be running the latest and greatest battery pack.  Zero Motorcycles, for one example, has run at least three completely different, and progressively better battery packs over the last six years.  One of the things we look for in a new product release is a hint at what the latest battery magic is, and so far, we haven't seen any backwards compatibility offered in the motorcycle market, that is, you can't put a new 2015 pack on a 2012 Zero. Tesla, at least, has once again led the way by offering a pack upgrade for their current Roadster owners.  On a motorcycle, power-to-weight (power density) is king, because it dictates performance.  Second is energy-to-volume, (energy density), which dictates how much capacity you can fit, and thus how much range you have. Those happen to be the two fastest moving factors in battery development today.

That's the drivetrain.  Batteries, the motor controller, and the motor.  Like anything else, it's all about a balanced system.  You wouldn't run a huge displacement gas motor and then starve it for fuel, or constrict the exhaust without feeling the pain of reduced performance or failing parts.  Likewise, you need to make sure your electric motor can deliver the power, won't melt itself, the controller can handle that power and the battery pack can supply it.  Over-design or over build one part and the rest will suffer.  Under-build it, and it will fail.

Electric Motorcycle Primer “InsideEVs Style” – Part 1: The Ride ...where in we talk about why we're doing this in the first place. Because riding electric motorcycles is awesome.

Electric Motorcycle Primer “InsideEVs Style” – Part 2: The Drivetrain The bits and pieces, and how they're different, but also how they're the same as your gas bike.

Electric Motorcycle Primer “InsideEVs Style” – Part 3: Battery Care and Handling (the BMS) How a lithium battery pack is different than any battery you've ever owned.

Electric Motorcycle Primer “InsideEVs Style” – Part 4: The Rest ... the other funny stuff about an electric bike.

Electric Motorcycle Primer “InsideEVs Style” – Part 5: Reading the Specs Wrapping up, using what we've learned by reading the spec sheets (and actually knowing what they mean).