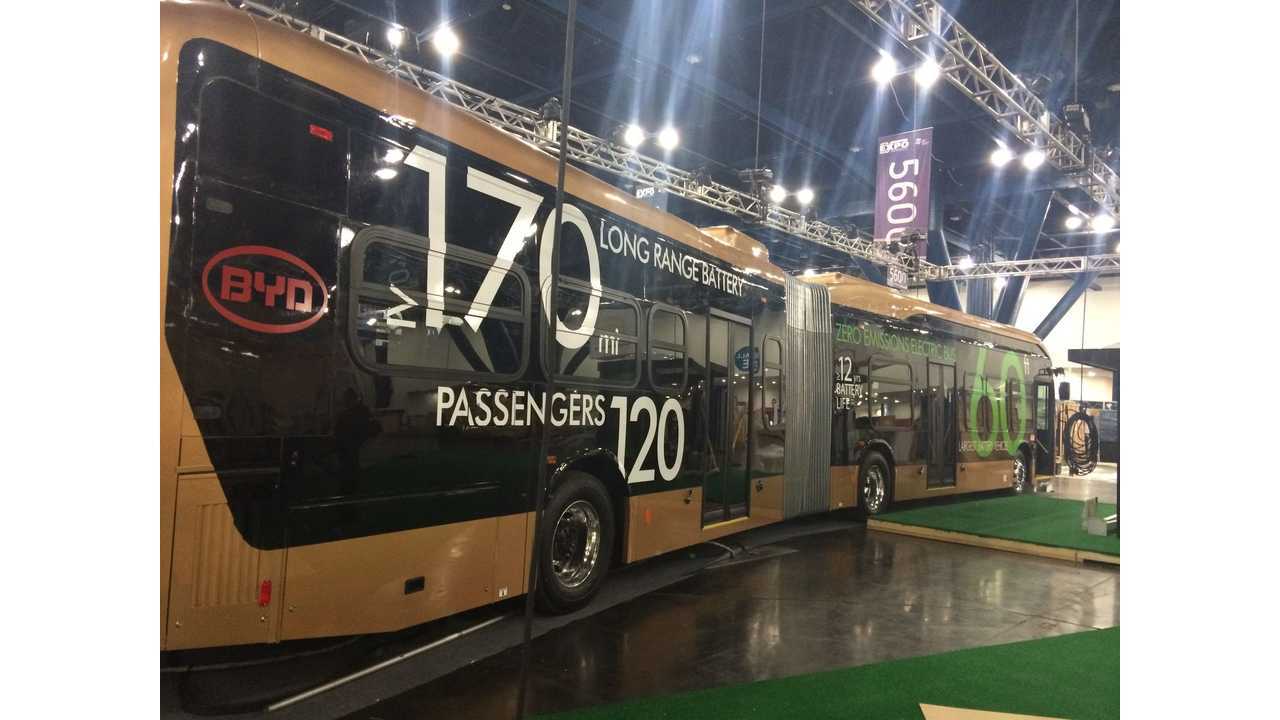 Here at InsideEVs we have always had an affinity for BYD and their mission to electrify mass transit vehicles while at the same time also delivering passenger EVs.

After all, as Bob Lutz (former Vice-Chairman of GM and father of the Chevrolet Volt) once said:

"We electrified the wrong end of the business. Electrification makes the most sense with vehicles that normally use a lot of fuel.”

The BYD Lancaster Can Carry Up To 120 Passengers

Of course at the time Mr. Lutz was promoting VIA's lineup of work trucks and vans over the mostly compact plug-in passenger vehicles of today, not all-electric buses.

Still, the thinking is sound, the greatest bang for your electric buck is in replacing low mpg vehicles.  Like a bus or taxi.

Apparently this fact is not lost on large private and public transit provider around the world, as InsideEVs had a chance recently to talk to Michael Austin of BYD America and he let us in on a little secret - the eBus business is good.

We also asked just exactly how many electric buses had actually been delivered (because it seems like every report we read from tracking companies seems significantly different from the last).  The BYD VP was happy to oblige.

"BYD has shipped more zero-emissions, battery-electric, transit vehicles than any other OEM to date, delivering over 2,500 Electric Buses globally in 2014 (including deployed rolling stock and vehicles that are awaiting deployment at customers).  Additionally, BYD has added 13 new customers under contract to deliver another 2,600 Electric Buses (in various stages)"

BYD Qin Is A Strong Performer In China

Adding in some 13,000 extended range Qin and 2,500-odd all electric e6 passenger cars sold this year around the world, BYD delivered the third most kW hours of EV capacity of any automaker in 2014.  If you go by fuel displaced by vehicles BYD has put on the road last year, BYD leads the way.

Mr. Austin says that BYD has been tracking almost 60% of the electric buses put into fleet use this year.  And through November more then 38 million mile in revenue service has been displaced.

"This (38 million miles) is equivalent to circumnavigating the globe 1,561 times, or provided offsets in the same amount of fuel that driving 337 Million miles with a consumer car would (@ 26 mpg) = equivalent of taking 22,000 vehicles off roads annually."

Put another way, operators have saved some $32,405,520 in fuel alone through Nov 2014.  (12,962,208 gallons of diesel fuel at 3 mpg and an assumed cost of $2.55/gal*)  To say nothing of the benefit of having less reliance on oil - which if you have visited a gas station lately, there is an advantage to having less demand for petrol in the price of a gallon of fuel.

Asked about BYD's electric bus business specifically, the Vice President said the keys to compete in the segment "is to DEVELOP and OWN the core technologies your product relies on."

"BYD is particularly proud of our proprietary Iron-Phosphate Batteries and In-wheel Hub Motors that make our buses best-in-class. We also believe that our product is scalable (23-foot, 30, 33, 40, 45 and 60 foot articulated buses prove this) and economical because we vertically integrate all of these technologies and can make them affordable. (NOTE: Other OEMs have to procure key components and pay margin-on-margin to scale their business. BYD employs more than 15,000 R&D Engineers globally and sees this as one of our key competitive advantages.)

The three key attributes of our proprietary battery are; 1. Safety: BYD Iron-Phosphate batteries are fire safe, 2. Environmental-Impact: They are 100% recyclable because they use a non-toxic formula and absolutely no heavy metals, 3. ROI: They are long lasting, with 30+ years of life in vehicle duty cycles providing a way to create residual value and bring down our up-front costs."

And finally, getting back to Bob Lutz's quote about electrifying the wrong part of the business first. The BYD VP agrees.

"Bob Lutz was right, but with a twist -- those applications that should be electrified first are the HIGH-utility vehicle applications. Big or small, Buses or eTaxis -- vehicles that operate two shifts up to 24-hour per day."

Recently, BYD launched the "Lancaster" - a 60 foot articulated electric bus (named after the city in California where it was made) with 170 miles of range from a 324 kWh battery.

Given the results so far, it is hard to argue with him.

Editor's Note:  Stay tuned for a lot more coverage of BYD EVs here at InsideEVs - on not only their electric buses, but also on the Qin and brand new Tang PHEVs.

The Tang PHEV gets to 62mph in 4.9 seconds via a 2L turbo 4 cylinder engine and two electric motors.

A BYD spokeperson noted to us that the Tang is about to go on pre-order this month in China "due to overwhelming demand."