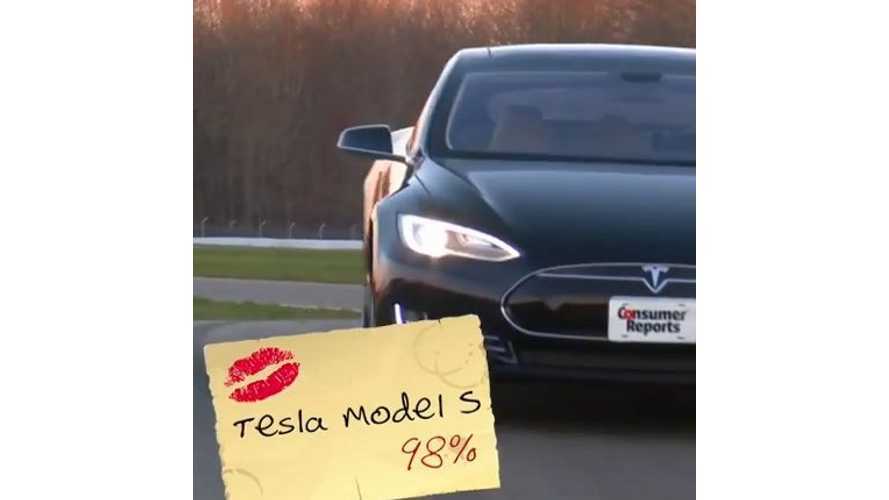 The Model S topped the "hybrids/electric cars" category, as well as capturing the overall victory with its 98% owner satisfaction score.

"With a single model that checks all of those boxes, Tesla Motors has built a rabid following since the car’s 2012 launch, reflected in 98 percent of Model S owners saying they would definitely purchase it again. Not only is the Tesla roomy, comfortable, and a lot of fun to drive, but it also has low operating costs—returning the equivalent of 84 mpg (a consolation, of sorts, for the car’s $90,000-plus price)."

"Across all vehicles, the average satisfaction rate was about 70 percent."

However, both the Chevy Volt and, to a lesser degree, Nissan LEAF, fared well.  The Volt scored 85% (#2 in category) in customer satisfaction, while the LEAF got 77% (mid pack in category).

There's something else that stands out with Consumer Reports' ratings:

"We asked subscribers whether they would get the same car all over again, and to consider attributes such as styling, comfort, features, cargo space, fuel economy, maintenance and repair costs, overall value, and driving dynamics. Owners of a sporty, luxurious, or fuel-efficient hybrid or electric- or diesel-powered vehicle were most likely to answer “definitely yes.”

In fact, the average rating in the "hybrid/electric cars" category is significantly higher than the overall average of 70%.