Tom Swift and His Electric Runabout (Or, The Speediest Car on the Road) 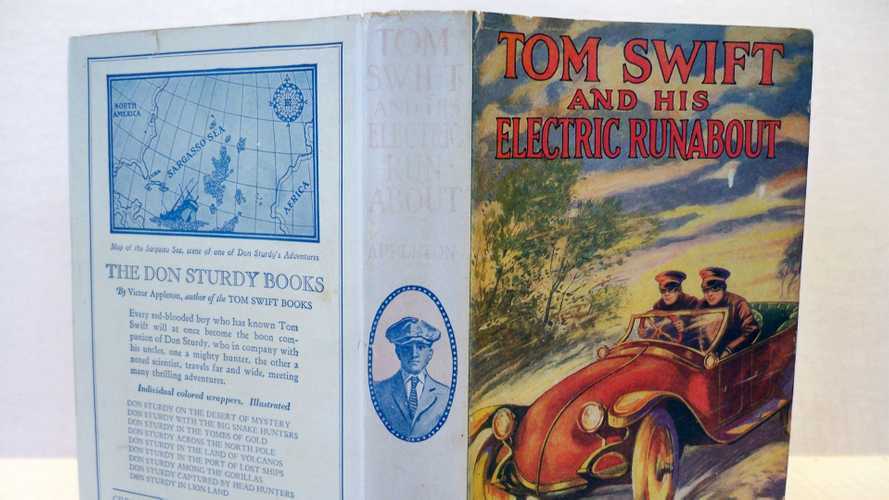 Long story short, we were rummaging around the bookshelves over the holiday and were re-acquainted with the venerable Tom Swift series.  If you say you remember that from your childhood, you're not talking about when they were new - the books were published in 1910.  More likely, like us, you remember then from your grandfather's bookshelf, possibly treasured volumes from when he was a child.

In any case, these stories of a Mr. Tom Swift, teenage inventor, (explorer and adventurer, as well), with his well-appointed shop and his ever-supportive father, not to mention rivals, spies and thieves, afford a unique glimpse into what was considered ordinary, as well as extraordinary life of the times.  Enter, the electric automobile.

Responding to a competition to design, build and race an electric car in an endurance contest put on by The Touring Club of America:

"Then how are you going to take part in the prize contest? Besides, electric cars, as far as I know, aren't specially speedy." (Tom's father)

"I know it, and one reason why this club has arranged the contest is to improve the quality of electric automobiles. I'm going to build an electric runabout, dad..."

Sound familiar?  No, not the part about the boy arguing with his father, the part about electric cars and speed?  Efforts to improve the technology of EVs?  There's more that will ring a familiar bell to any EV enthusiast throughout the book:

"Out in my shop, running yet if it hasn't been frightened by the airship smash," replied the lad, somewhat proudly. "It's an oxide of nickel battery, with steel and oxide of iron negative electrodes."

"What solution do you use, Tom?" asked Mr. Swift. "I didn't get that far in questioning you before the crash came," he added.

"Well I have, in the experimental battery, a solution of potassium hydrate," replied the lad, "but I think I'm going to change it, and add some lithium hydrate to it. I think that will make it stronger."

Lithium-potassium batteries?  Nickle Oxide?  What?  May we remind you, this is a children's book, and it was written by a children's author in 1910?   How about this passage?

...kind of puts the history of the electric car into perspective, doesn't it?  We always consider anything but a lead-acid battery to be a product of at least the late years of the 20th century, if not the 21st.  Hardly did we consider nickel, lithium and potassium being compounds being tossed around as far back as the turn of the last century.  ...as well as make us wonder where we'd be today if inventors like our boy Tom had kept pushing the envelope of battery chemistry back in 1910.  Rather than how it went.

You can enjoy the full text of this book on the Project Gutenburg site:  Title: Tom Swift and his Electric Runabout or, The Speediest Car on the Road - Author: Victor Appleton, or, as we did, leaf through the yellowed pages of the original volume - not a lot of money, found on auction sites, and well worth curling up with on a cold winter evening.  ...to think about what was, in EV history, and what could have been.

We won't spoil it by telling you if he won the race.  But yes.  He gets the girl.