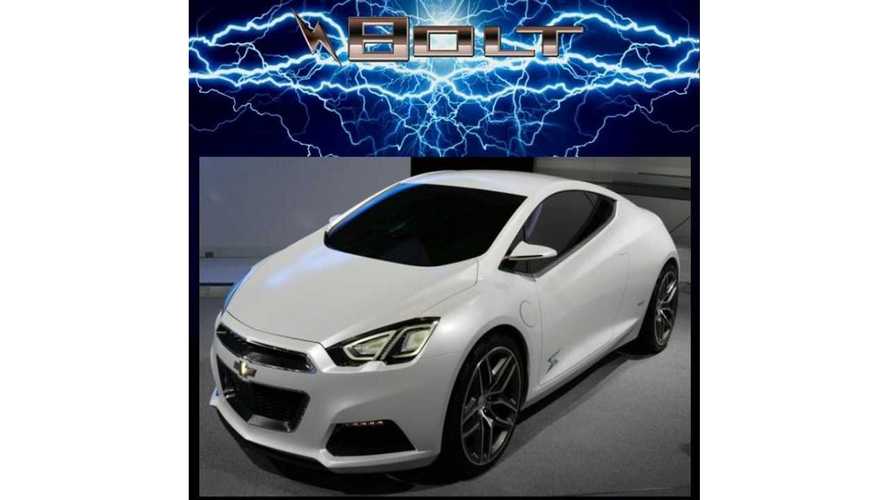 GM Sits On The "Bolt" Name In Recent Filing

Back in August 2014, General Motors filed a trademark for the name "Chevrolet Bolt."

UPDATE:  The Chevrolet Bolt EV Concept has indeed been revealed - all the details, pics, specs and videos can be found here.

Now we're learning that the Chevy Bolt might well be the 200-mile pure electric car that General Motors officially confirmed 3 months ago.  If true, then we won't see a 200-mile Chevy Sonic, but rather something similar to it in size, but pure electric and called the Bolt.

Additionally, the Wall Street Journal and other sources are now reporting that the Chevy Bolt will be unveiled on Monday January 12 at the 2015 NAIAS.

So, it's a given that this car exists and that it's been in development for quite awhile, but now it appears that it will finally debut in Detroit on Monday at the 2015 NAIAS?

"General Motors Co. plans to launch a $30,000 electric vehicle called the Chevrolet Bolt that would be capable of driving 200 miles on a charge by 2017, according to people familiar with the strategy, a move to gain ground on Tesla Motors Inc."

"GM will show off a concept version of the Bolt on Monday at the Detroit auto show, eight years after the auto giant disclosed it would re-enter the electric car market with the Chevrolet Volt."

"The Chevy Bolt, carrying a more capable battery manufactured by South Korea’s LG Chem Ltd. , will be aimed squarely at Tesla’s forthcoming Model 3, a $35,000 electric car also slated to debut in 2017. The concept version of the electric car will be a hatchback designed to look more like a so-called crossover vehicle, according to people familiar with the design."

Hmm...a hatchback designed to look more like a so-called crossover vehicle? Might that be the CrossVolt then.  It too has been rumored to be ready for debut at the 2015 NAIAS.

It's believed that General Motors CEO Mary Barra will be the one unveiling the Bolt (CrossVolt?) at the 2015 NAIAS.  The Wall Street Journal states:

"The Bolt represents the biggest risk taken by Chief Executive Mary Barra since taking GM’s helm a year ago. Its development was approved when she was product chief under former CEO Dan Akerson . But U.S. gasoline prices have fallen below $2 a gallon this year, hurting demand for electric cars."

"For Ms. Barra and other GM engineers, the Bolt’s proposed 200-mile range is critical because it is seen as addressing concerns about range long associated with electric cars, one person involved in the car’s development said. “Two hundred miles is seen as some sort of barrier where the notion of range anxiety goes away,” this person said."

In terms of sales volume, we expect General Motors to shoot for the moon with its 200-mile electric car and so to does the Wall Street Journal:

"By placing the Bolt in the high-volume Chevrolet line and giving it a name similar to the Volt, executives hope to polish Chevy’s image as a full-line vehicle manufacturer prepared to meet demand, regardless of prices at the pump, according to people familiar with the strategy. GM expects the Bolt to compete globally, including in markets such as China. It is unclear if a car similar to the Bolt would be inserted in the Opel, Cadillac or Buick brands down the road."

As for competing with the Tesla Model 3, it seems GM is ready to take on Tesla with this 200-mile electric car.  Range is spot on in regards to what we expect of the Model 3 and pricing will easily undercut the Model 3 if the $30,000 rumor is correct.

LG Chem is believed to be the battery supplier for the 200-mile electric Chevy:

"LG Chems’s battery improvements to make it possible to for GM to create the low-cost EV include better durability and electrical controls. Also, LG will use more of the available storage capacity in the cell than it does on the Volt."

“We have progressed far enough that it gives us a high level of confidence that in the 2017 kind of a time frame, there are no show stoppers or gotchas that we don’t know how to get over,” Prabhakar Patil, the chief executive of LG Chem Power Inc., the U.S.-based battery arm of the Korean electronics giant, said in an interview."

The 2015 NAIAS is shaping up to to a big event for fans of plug-in electric vehicles.  We'll be on the scene to catch all of the reveals.  Press days start on Monday, so check this space often in the coming days to see how the show develops and to catch the unveilings as they happen.

Editor's Note:  Don't forget that we will have all the next generation of Chevrolet Volt news, info and specs you can handle late Sunday/early Monday night from the NAIAS  (look for that at 12:01 AM Jan 12th)