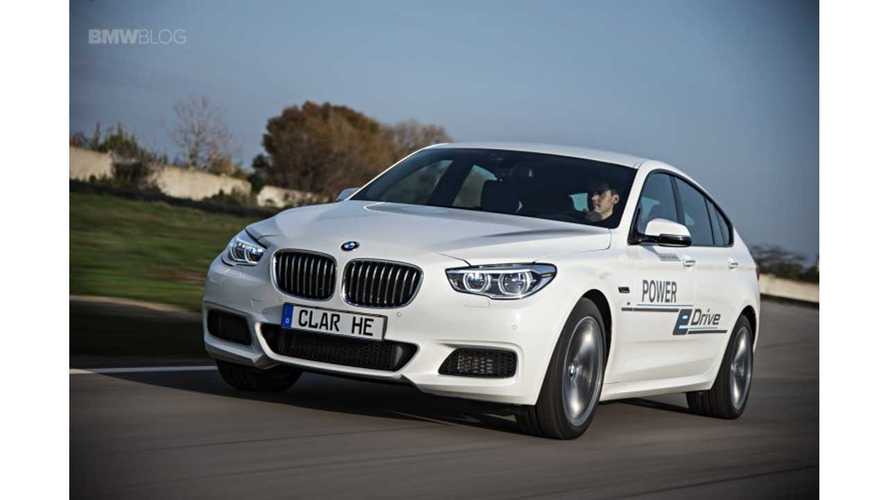 BMW equips a 5 Series GT with the eDrive and TwinPower Turbo technology to showcase the future of plug-in hybrids.

The ongoing development and refinement of hybrid drive systems under the Efficient Dynamics program is geared in particular to maximizing the amount of time the vehicle spends in electric mode. Therefore, BMW is developing a new generation of “highly electrified” hybrid concept models.

First one to make its debut, the 3 Series eDrive Concept, will go on sale in 2016. Next year, the BMW X5 eDrive will also make its market debut.

Future models using the Power eDrive technology will include significantly higher-powered electric motors and batteries with twice the capacity of present versions. The Power eDrive electric drive system will contribute approximately two thirds of the vehicle’s combined output. The new BMW engines family with TwinPower tech will fill in the other third.

The drive components used in these future hybrid systems will offer combined outputs in excess of 500 kW, while the capacity of the lithium-ion batteries – up to 20 kilowatt hours – will likewise be greatly in excess of current hybrid systems.

The increased all-electric driving range will reach up to 100 km (62 miles), essentially the new plug-in hybrids could run in the electric mode every day.

The combustion engine will fulfill several roles, such as providing a power boost when needed, extending the driving range and provide some recharging capabilities.

On future plug-in hybrid concepts the electric motor, which will be the main source of power for everyday driving, will continue to drive the rear wheels, while the addition of a second electric motor driving the front wheels will create an all-electric road-coupled all-wheel-drive system. At the same time, an internal combustion engine will also supply power to the front axle.