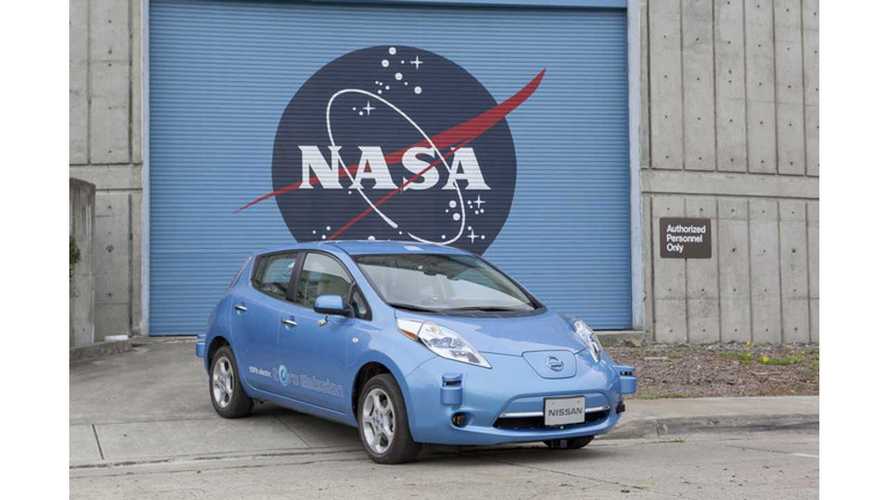 Talk of future autonomous driving is all the rage these days amongst the automakers.   Everyone is getting into it, but few have actually give firm dates on when (and how) that will become a reality.

Nissan is not one of those automakers.

For Nissan, they have joined together with NASA and will have an autonomous vehicle delivering "materials, goods, payloads and people" at NASA's Ames Research Center at Moffett Field, California by year's end.  So we aren't talking about just zipping around on the highway's here either.

In fact Nissan and NASA have joined up on a five-year mission to  "research and development partnership to advance autonomous vehicle systems and prepare for commercial application of the technology."

Eventually a fleet of autonomous vehicles will be validating proof-of-concept at the facility.

Considering Nissan will need various US government agencies, including the NHSTA to loosen regulations surrounding autonomous driving, this governmental agency cooperation is probably a good starting point for the company.

As for when the autonomous technology hits the public, Nissan says they will begin integrating it next year, with 2020 set as the introduction of "autonomous drive vehicles that have the ability to navigate in nearly all situations, including the most complex situation, city driving."

One Of These Executives Is The CEO Of Three Major Automakers And Enjoys The Sun, The Other Works In The Vacuum Of Space

Carlos Ghosn, CEO of Nissan said of the partnership:

"The work of NASA and Nissan – with one directed to space and the other directed to earth, is connected by similar challenges. The partnership will accelerate Nissan's development of safe, secure and reliable autonomous drive technology that we will progressively introduce to consumers beginning in 2016 up to 2020," while later adding, "this partnership brings together the best and brightest of NASA and Nissan and validates our investments in Silicon Valley."

NASA says they will benefit from Nissan's "shared expertise in innovative component technologies for autonomous vehicles" as well as "shared research to inform development of vehicular transport applications, and access to appropriate prototype systems and provision of test beds for robotic software."

The Director of the Ames Research Center, S. Pete Worden was on had to greet the Nissan CEO, and also made a statement:

"All of our potential topics of research collaboration with Nissan are areas in which Ames has strongly contributed to major NASA programs. Ames developed Mars rover planning software, robots onboard the International Space Station and Next Generation air traffic management systems to name a few. We look forward to applying knowledge developed during this partnership toward future space and aeronautics endeavors."

"Alright, Now Lets Get One Of The Two Of You Talking. Good! Now Do Some Hand Gesturing. Perfect!"

Autonomous LEAF In Front Of The 1960's Circular, Spooky "Authorized Personal Only" Building At Ames - Where They Keep The All The Alien Technology