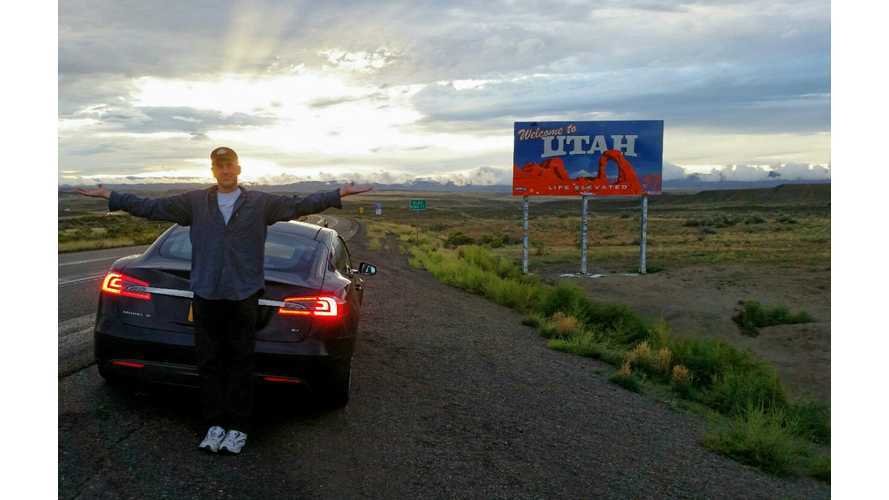 Via the Tesla Motors blog, we learned that Michael Fritts, ex-long-haul trucker, driver without wallet, and owner of a Model S bought sight-unseen about 40,000 miles ago with proceeds from Tesla stock sales, was joined by his friend, Lita Elbertson, to travel to all 50 states in the US, continental and otherwise.

The plan was to "...eventually complete a 48-state route in 32 days before Fritts dropped off Elbertson in Washington and continued on to Alaska alone. In the next few weeks, he’ll ship the car to Hawaii and cross the 50th state off the list." from the blog post dated Nov 25.

We have found no other supporting information on the trip - no blog or twitter feed, so there's not much more to report, other than an interesting story in the Durango (CO) Herald, from when they swung through that berg in mid-September.  Apparently, in Utah, there was a bit of excitement as well as some terrain-testing of the Model S:

"While in Blanding, Utah, on Wednesday, Fritts took the vehicle off-roading, which led to getting stranded in the Utah desert, he said. Luckily, four men arrived to help push the car out. Before the ordeal was even over, a picture of the incident was apparently circulating social media. A 9-year-old boy there told Fritts and Elbertson he recognized the two from the photo on the Internet."

No, no trace of that photo that we could find, either.  If any group of enthusiasts can find it, we trust our readers here at InsideEVs can...  anyone?