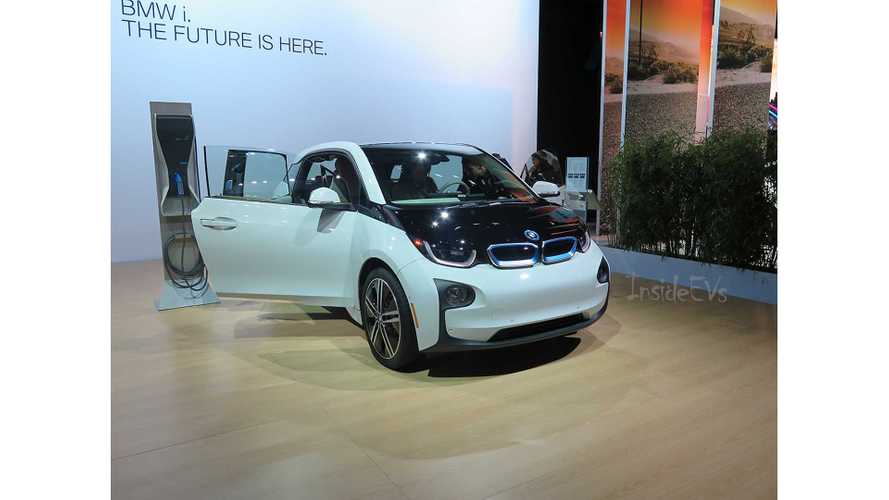 At the 2014 Los Angeles Auto Show, BMWBLOG sat down with Jacob Harb, Department Head BMW i USA, and Jose Guerrero, Head of Product BMW i USA. The interview focused on the BMW i3 sales and production changes for 2015, as well as topics like the infrastructure in the US.

“Driving is believing” is a key component for the marketing success of the BMW i3. Harb says that the program has been very valuable for the brand and it will continue in 2015.  “We’ve had almost 8,000 test drive leads from the i3 extended drive over a period of two months,” says Harb. “It has been all received all the way around with mainstream press picking up those stories as well.”

Harb says the company is making steps in 2015 to improve the i3 customer convenience and infrastructure. Guerrero confirmed to us that the BMW i8 will get the Comfort Access, a delay caused by the tricky door design.

The i3 changes are:

The Key FOB will open the front trunk, but not the rear hatch.

“We are now confident enough that in 2015 we will have the right infrastructure for DC Fast Charging, so it makes to include it standard in the MY2015,” says Harb.

March 2015 will bring a software update with the state of charge gage and the charge after 100% lock or unlock. But the safety reasons, the unlock feature will not be available through BMW i Remote App. You can only unlock the car if you call BMW Assist. “In the U.S., it’s a safety and legal issue, and we took an extra step by having to call BMW Assist to verify who you are”, says Dave Buchko, BMW USA spokesman.

When asked about a configurable keyfob like European customers get, Harb and Guerrero say that feedback has been received at the HQ in North America and timelines have been accelerated to trying to be as nimble as they can to address things while making it all retroactive too. BMW says that general configurability is an important topic for BMW and without getting into specifics, Harb and Guerrero say this is something they are currently looking into it.

175 dealers which also participate in the i3 extended drive are offering the Flex Mobility Program. Customers have the option to get a 328i or 328d model, either rear-wheel drive or xDrive, or an X3 28i or 28d model.

Initially BMW i says that the leaving off the heated steering wheel was a decision based on the energy efficiency. The steering wheel would certainly require extra energy to run and the compromise was made. But, Harb adds that he is listening to feedback and if there is plenty of that coming back to the brand, the option could go back through decision making process. My co-interviewer Tom Moloughney pushed further by indicating how the heated steering wheel might turn out to be an energy saver for the i3. The warmed-up wheel could potentially lead to the inside cabin temperature being adjusted downwards by the driver.

The sunroof apparently was left off also due to weight savings and BMW has not indicated if the option even has a chance to make it in future iterations.

Lane Departure Warning uses different camera systems and BMW didn’t think there was enough demand for it out there and Active Cruise Control is believed to have been a better choice to include in the car. “If there is enough demand out there for it, let us know,” says Harb.

Most of the BMW i3 drivers are confused about their driving range and there is currently a misconception that the battery state of health has dropped which further reduces the driving range. So after a year, for example, how could a customer find out what their battery capacity is? “We’re looking at things  like the range algorithm,  maybe too conservative, so we’re thinking about that overall”, says Harb. “State of health is also a number read-out and we are able to see that, but we haven’t thought about the process to handing out that to the customer.”

Guerrero says the diagnostic software can print that out but based on this feedback, the i folks say that looking into a formalized process will be on the agenda. Guerrero adds that the battery has been certified for 15 years due to an existing law in Europe.

BMW i says 2015 is the infrastructure year and the 2015 Detroit Auto Show is the venue chosen to communicate some of the exciting things coming up. “We have some really good plans, incredible collaboration and the industry has matured significantly more than when the i3 was engineered,” says Harb. “You will be pleasantly surprised.”

BMW i says that thanks to customers’ feedback, the electric division has managed to improve their process of delivering updates and features to the cars. Taking a more agile approach and involving early adopters, it gave the engineers enough data to be able to speed up the deployment process. BMW i believes this is a huge gain for them and they are able to increase the customer satisfaction faster.

While BMW i folks were upfront with many of the things we asked, they reserved some surprised for 2015 Detroit Auto Show where we will supposedly learn more about the product updates and infrastructure strategy in the U.S.