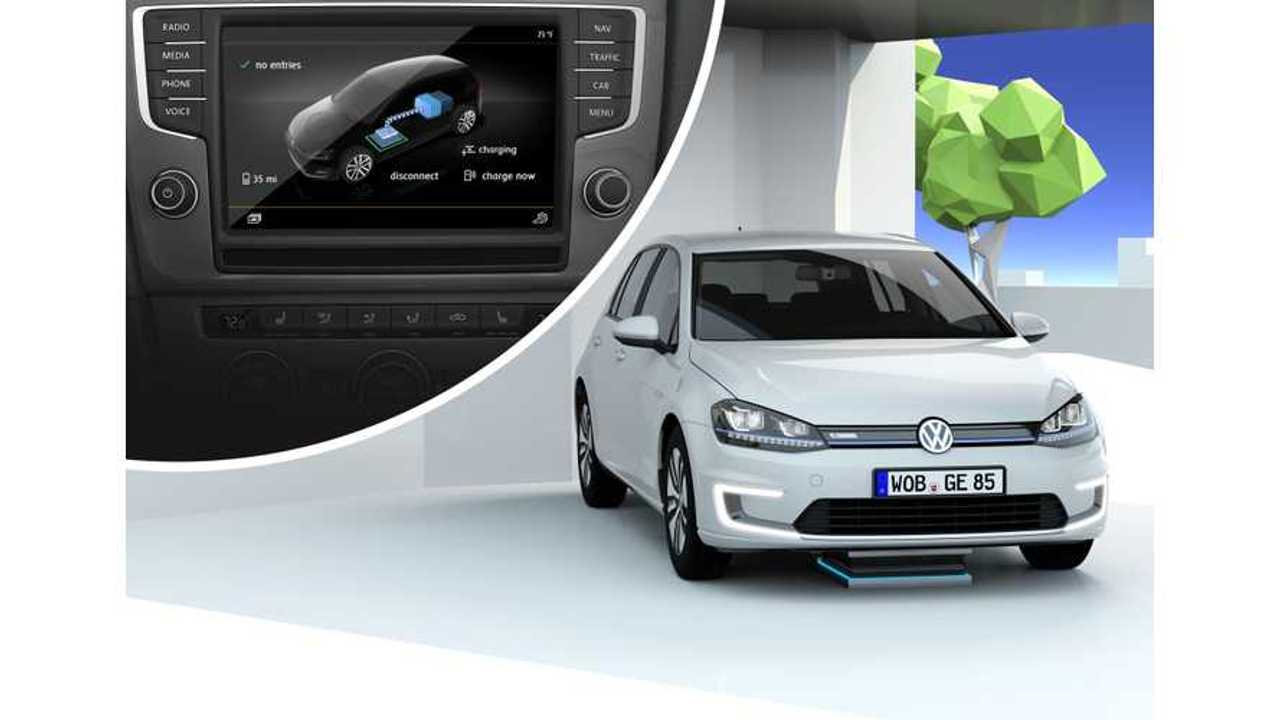 Volkswagen, like many other manufacturers, presented at the 2015 Consumer Electronics Show (CES) in Las Vegas its electric car with new features like inductive charging and self parking (for example in a garage or parallel).

The e-Golf becomes more connected and could be controlled by tablets and smart watches.  (full video demos below)

Automatic docking into inductive charging stations with output signals that indicate the battery state-of-charge using the vehicle's exterior lights are just few of many things that maybe someday will reach the market.

Below you will find more detailed info and video demonstrations.

Wolfsburg / Las Vegas, January 2015. Volkswagen, Europe's most successful car brand, has been instrumental in driving the development of more connected, more intelligent vehicles. That is because the car—which operates intuitively, is networked systematically, reacts intelligently and offers significantly greater convenience. This gives new innovative impetus to mobile life, making it more communicative, safer and interesting. This is why Volkswagen is demonstrating an entire fleet of vehicles at the 2015 Consumer Electronics Show (CES) in Las Vegas to show just how much the car and computer are already intertwined today and will continue to grow together in the future. The main focus at the show is on four aspects: computer-controlled drive systems; app and smartphone integration; intuitive vehicle operation; and autonomous and semi-autonomous driving.

"The two inventions of the century, the car and the computer, are gradually coming closer together. We need to design future mobility to be even more intelligent and even more networked," said Prof. Dr. Martin Winterkorn, CEO of Volkswagen AG.

Electric mobility is coming into its own. Full electric and hybrid versions of high-volume models have now arrived, and Volkswagen is setting the pace with best-sellers like the Golf. The e-Golf and Golf GTE are the protagonists of a new mobility. These cars would be inconceivable without on-board electronics with computers that control such functions as battery charging and, in the case of the hybrid models, switching between the different drive sources. At CES, Volkswagen is showing, among other things, how electric cars will be able to automatically dock to inductive charging stations and output signals that indicate the battery state-of-charge using the vehicle's exterior lights.

It has now been eight years, to the month, since Apple® introduced its first generation iPhone in San Francisco. Smartphones have irreversibly changed our everyday lives, from the ways we communicate to how we access information. It has long been normal practice to have phones automatically connected to a car's hands-free telephone system via Bluetooth and to have smartphones stream media libraries into car infotainment and sound systems. But now, Volkswagen is taking a significant step forward.

Later this year, VW will introduce the second generation "modular infotainment platform" (MIB II) in the United States. Along with the new infotainment system, MirrorLink™ will also be made available for the first time, integrating the apps and operating layout of numerous smartphones (including Samsung, HTC, LG and Sony) into cars. When MirrorLink™ is introduced, two other interfaces will also be launched under the App-Connect label: CarPlay™ (Apple®) and Android Auto™ (Google®). Simultaneously, VW will also launch CarPlay™ and Android Auto™ in the European market.

In the future, the car will not only merge with the mobile world, it will also be more intuitive for people to operate. Today, and in the future, the car will adapt by recognizing their occupants’ movements—via controls based on proximity sensors and gesture recognition. Today, the latest infotainment systems by Volkswagen already detect the approach of a hand with proximity sensors. In the next revolutionary step—which Volkswagen is showing with the Golf R Touch concept vehicle at CES—the infotainment unit will use cameras to not only detect hand gestures, but understand but assign meaning to them. Gesture control will make it possible to control displays and functionality without having to use a touchscreen. This technology adds comfort and convenience to human-vehicle interaction by reducing driver distractions while operating controls, and further underscores the synchronized relationship between the car and the computer.

Clearly, cars of the future will need to be able to drive autonomously if necessary, a change that will be introduced step by step. Even today, Park Assist by Volkswagen enables semi-automated entry and exit from parking spaces. The car executes the entire steering process for the parking maneuver independently. At CES, Volkswagen is now showing another evolutionary stage of Park Assist: Trained Parking. Here, the car scans a frequently driven path to a parking space via camera, and from that point on it executes the path semi-automatically by computer control. In another evolutionary stage, it will be possible to have the car parked by the driver remotely, using a smartphone to control the car.

The Volkswagen Golf R Touch concept vehicle, displayed for the first time, features an infotainment system that incorporates gesture control as the next step in the area of intuitive control. All it takes is a hand movement in the space in front of the Golf’s infotainment display to make human and machine interact as one. Volkswagen is thereby extending touchscreen operation into a third dimension.

The development team for the Golf R Touch pursued the goal of producing an interior and infotainment concept that would fulfill seemingly contradictory requirements. Despite the continually growing complexity and number of functions, this concept was intended to reduce driver distractions while attaining maximum personalization and intuitive operation in the car. The vehicle was created in which nearly all controls are implemented via touchscreens and sensor switches. Therefore, the Golf R Touch is equipped with three displays: the 12.8-inch high-resolution infotainment system touchscreen; a Control Center (8.0-inch with touch feedback) arranged beneath it to control vehicle, climate control and media functions; and an Active Information Display (digitalized instruments, 12.3-inch). The layouts of the central touchscreen and the Active Info Display can be customized rapidly, just as on a smartphone or tablet today. The same is true of the entire color staging in the interior.

At CES, Volkswagen is also showing the maximum networking potential of the car in the form of the Connected Golf. This e-Golf, which will be equipped with the latest generation (MIB II) infotainment system, will incorporate an enormous range of apps, smartphones and tablets via its progressive interface management system. With online-based functionality, its various features and applications will be organized into several clusters. All of these clusters are implemented in the Connected Golf.

A look at today's App-Connect is particularly exciting. As noted above, Volkswagen is one of the first carmakers to integrate the vast majority of smartphone operating systems in models like the Golf, based on App-Connect. The three underlying software interfaces of App-Connect are Mirror Link™, Android Auto™ (Google®) and CarPlay™ (Apple®). Via these interfaces, the driver and passengers in the car are able to use the many different smartphone apps over the infotainment system.

Beyond the applications of Volkswagen Car-Net, the Connected Golf is equipped with many other innovations. For example, Media Control enables the integration of tablets and smart watches into the infotainment system and uses a special app that creates a new-age rear seat entertainment system. Regular Routes is the name of a function by which the navigation system automatically detects traffic disruptions on the daily commute to work, for instance, and autonomously suggests an available alternative route. Parking Guide is another ingenious navigation feature. It embodies a technology that finds parking sites that have a high probability of available parking spaces.

Intelligent Charge in the e-Golf illustrates how electric cars will be made more convenient in the future. Over the mid-term it will be possible to offer inductive charging as an alternative to cable-based charging. In the future, it will be possible to see in just seconds whether the battery is still being charged or whether it is already fully charged by looking at the vehicle's exterior lights. The e-Station Guide will not only assist electric car drivers in finding a desired charging station, but they will also be informed about their location and charging equipment as well as payment options. As an additional function, the Digital Key lets third parties use a smartphone or smart watch to temporarily and safely gain access to the vehicle and to start or stop the engine.

Park Assist from Volkswagen automatically guides the car into parallel and perpendicular parking spaces (in reverse) and can also automatically exit parallel parking spaces. When parking into or exiting a space, the system assists the driver by autonomously making optimal movements of the steering wheel to stay on the ideal line. At CES, Volkswagen is introducing an advanced evolutionary stage of Park Assist known as Trained Parking. Here the car (an e-Golf) uses a camera, mounted in the base of the rear-view mirror, to scan a frequently used path into a parking space, and from then on the parking process is executed semi-automatically and precisely by sensors and computer. In the future, it will also be possible to semi-automatically park above an inductive charging station. In another evolutionary stage, the driver would no longer need to stay in the car during parking—he or she would just monitor the operation with a smartphone as a "remote control" device."