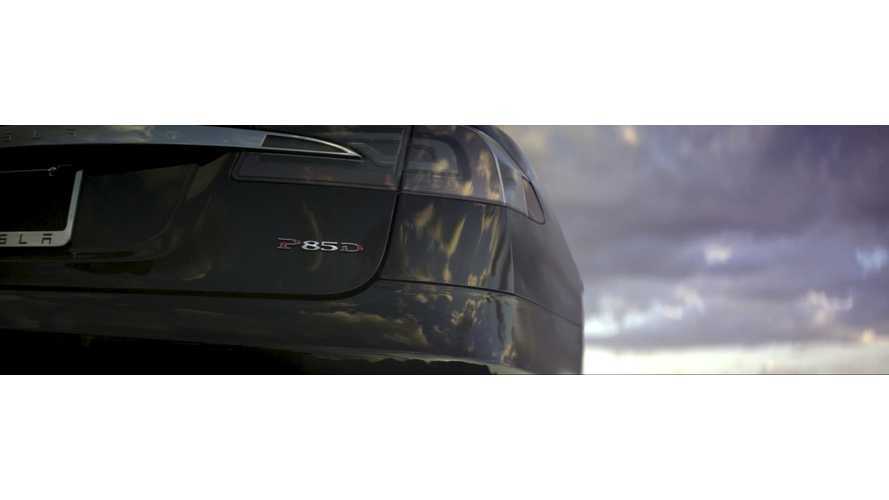 Last week, Elon Musk tweeted: “About time to unveil the D and something else” and instantly the interwebs were abound with people asking, “What the H is the D?” Personally, my favorite guess was when one person wondered if it could be a diesel range extended version of the Model S.

After watching the response to his Tweet, it’s apparent that Elon has become the Steve Jobs of the automotive world. All he has to do is hint at something, and the Tesla faithful go wild. But it’s not just the electric car enthusiasts, in the six days following the infamous Tweet, Tesla stock rose over 6 %.

However the market didn't respond well to the news that the D has been revealed as an exciting, high-performance, dual-motor, all-wheel-drive version of the Model S. By 11:00am the next day TSLA was down $17 (6.5%) That's not too surprising because most people who follow Tesla knew an all-wheel-drive S would eventually be available so this wasn't any real surprise. Tesla is using the Model S platform for the Model X, which will have dual motors, and offer all wheel drive, so it would be silly for Tesla to keep that technology exclusively for the Model X and not offer it on the S. It was expected to be even higher performance than the base rear wheel drive S, but the performance is really stunning; 0-60 in 3.2 seconds.

The “something else” turned out to be the announcement that Tesla has finally put the finishing touches on their version of Drivers Assistant features, something that most of their competitors already offer. Again, it was no secret that Tesla was working on Drivers Assistant features; it was one of the few things that current Model S owners have complained about the lack of. Tesla offered demonstrations which showed the Model S able to change lanes, accelerate and decelerate to obey the posted speed limits and come to a stop on its own by following the vehicle in front of it. Really neat tech, but nothing groundbreaking when compared to the already available drivers assist features of the competition.

The excitement over the dual motor and drivers assist options is understandable, as both are great features, plus Tesla has done an incredible job thus far. They proven so many automotive journalists, executives and financial analysts wrong and continue to defy the odds. These enhancements also prove that Tesla isn’t going to rest on their accomplishments, and that they will indeed continue to improver their products. Tesla continues to install a vast network of Superchargers which allows their already long-range electric cars to travel distances other electric cars simply cannot. They have brought to market a car that has won an impressive amount of awards, been called the best car some publications have ever tested and achieved the highest crash test score possible and now they have just improved it.

But let’s not lose sight of the Tesla’s more important goals; bringing the Model X and ultimately the Model 3 to market. The highly anticipated Model X, Tesla’s next model to be released, was barely a footnote in last night’s Tesla event. Back in February of 2012, at the Model X premier, Elon said this about Model X deliveries: “We will start production towards the end of next year (2013), probably deliver a few units…and bulk production will start in 2014.” Then, in March of 2013, Elon pushed back Model X production a full year to late 2014: “We are adapting the platform architecture of the Model S to develop our Model X crossover. We revealed a prototype of Model X in February 2012 and plan to begin production in late 2014.” Then in May of this year Tesla made this announcement: “Extensive development work on Model X is underway and we expect to have production design prototypes ready in Q4.”

So, it went from deliveries in late 2013 to late 2014 to now only having production prototypes ready for late 2014. It’s now Q4 of 2014 and Tesla still hasn’t revealed the actual production version of the Model X. It’s obvious Model X deliveries won’t be happening at all as promised in 2014 and it isn’t even clear if and when they will happen in 2015. This isn’t breaking new ground for Tesla, though. Both the Roadster and Model S suffered with delays but Tesla survived unscathed because both vehicles ultimately delivered a driving experience that was intoxicating, and honestly there was simply no competition in the premium EV space. But how long can Tesla continue to deliver new vehicles years after they are initially promised?

Tesla’s affordable 3rd generation car, the Model 3 was initially promised in 2015. Then, in March of 2013 Elon Tweeted “We are still 3 to 4 years away, wish it could be sooner”. That would mean Model 3 should launch in 2016 to 2017. It’s only a couple months from 2015 and not only hasn’t the Model X launched, but we haven’t even seen the actual production version. It’s looking like 2017 may be a highly optimistic goal for the Model 3, but only time will tell.

In the meantime we have Elon and his magical Twitter account, inspiring hope and promise of better things to come. He’s a master at creating suspense, offering little tidbits to keep everyone waiting to see Tesla’s next move. His confidence and optimism makes you want to believe everything he says, even if reality makes it difficult to accept. But how long can he keep it up without delivering the X is the question. Does the D really stand for Diversion? Was last night’s announcements just Elon’s clever way of deflecting attention away from the problems the Model X program is having? It seems to be working because nobody is asking the tough questions about why the X has had so many delays, and when is it actually coming.

Sooner or later the Model X must launch and then Tesla needs to get Model 3 to market as soon as possible. By 2017, there will likely be competing long range electric offerings by other premium OEMs. Tesla won’t have a corner on the 200-mile EV market by then, but they will likely have the most robust nationwide DC fast charge infrastructure in place and it will be the only one that is free to use.

Despite delays, Tesla hasn’t failed to deliver yet and I’m not betting against them now, but it can’t be overstated how important it is to get the Model X off the ground and stay on schedule for the Model 3. If Elon can indeed keep his promise of a 200-mile EV that costs under $40,000 and delivers it in 2017 (2016 looks impossible at this point), customers will be lining up around the block as if the next iPhone was being released. If indeed that happens then the only D we’ll be talking about is Dominance.