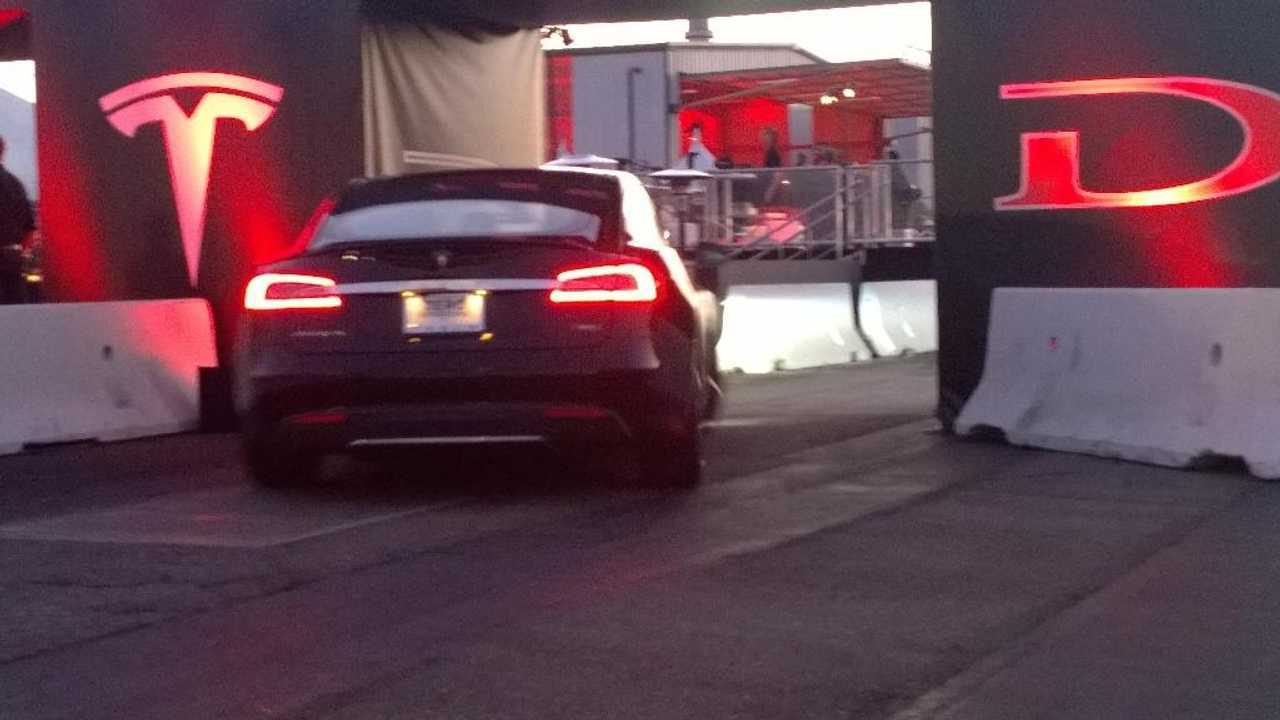 Even though the USA Today broke the embargo on the Tesla "D" and "something else" announcement by Elon Musk before he hit the stage Thursday night, the debut still went off without a hitch in a carnival like event at the Hawthorne Airport.

Update (below):  Full live blog and pictures from the event - official livestream can be found here.

Effective Now You Can Order A Tesla Model S P85D!

Tesla announced Thursday that the all-wheel-drive versions of its Model S electric car will manage a slight increase in range of about 10 miles on a charge vs. the rear-drive models — for a maximum of 275 miles — because of efficiencies designed into the new system.

CEO Elon Musk called his system "a huge improvement" that he claims is "taking the technology to the next level."

From the release party we have learned that the new flagship Tesla can achieve 0-60 mph in only 3.2 seconds.  A time that makes the Model S P85D the quickest sedan ever produced.  So, throw away your Porsches and Ferraris gentlemen, and probably your current "old and busted" Model S too.

The P85D's Quarter mile is down to 11.8 seconds - almost a full second quicker than the P85 of today.

Editor's Note:  You can check out Tesla CEO Elon Musk taking then new Model S P85D for a trip down the tack here.  Musk also gives the nickel tour of what auto pilot can do.

Cutaway Of The Dual Motor System

The AWD Model S will be available first as the P85D.

We have to add that when you get this package you also get the long anticipated seat upgrade.  According to Tesla- "Model S Dual Motor Performance will receive Tesla’s next generation seat, reengineered for comfort and lateral support."

Deliveries of that version will begin in December.  The P85D will be followed by the 85D and 60D in February.

When can you order?  Well, right now of course!

Tesla says that by adding AWD, the Model S will appeal more to buyers in snowy climates.  In addition to revealing the P85D, Tesla announced some driver's assist features.   According to USA Today, Elon Musk says some of the assist features are unique to Tesla:

•The new system will move the car over a lane when the driver uses the turn signal.

•The car reads speed-limit signs and adjusts the car to the speed on the sign.

"Other features match the lane-departure warnings and other safety and driver-help features that are getting common."

"Tesla says the cars it's building now have 12 sensors each able to "see" 16 feet to enable the safety tech. Those can't be retrofitted to older models, Tesla says."

But vehicles with those sensors simply need to have them activated by Tesla to get the new features.

Waiting On The Show To Start (Via Zan Dubin Scott)

Event recap of the Tesla CEO's address to the crowd at Hawthorne Airport:

"As you probably learned from the internet, the D stands for Dual Motor...but the best thing to do is to show you the actual car.  So let's release the titan!"  - enter the chassis, showing off front and rear motor

"Can adjust front and rear drive by the millisecond."

"The acceleration gets a little faster, the top speed is a little higher.  And the efficiency actually increases."  The Tesla CEO points out that in a electric car the range actually increases with AWD as opposed to the opposite in a gas car.  "Literally everything improves with dual motor"

"This car is like having your own personal roller coaster...the car will have three setting: Normal, Sport and Insane" (crowd laughs)

The car has 4 systems that make up the autopilot.  Forward looking radar, which is able to "penetrate fog".  The next elimate is a front camera.  Third system is long range sonar, which gives a "protective cocoon around the car".  Four system is integrating all that into the navigation.

"We are not at the stage where you can safely fall asleep" (crowd laughs) "We are basically where is, uh, allowed by regulations...active emergency braking, self park.  You will be able to step out of the car and have it park itself in your garage."