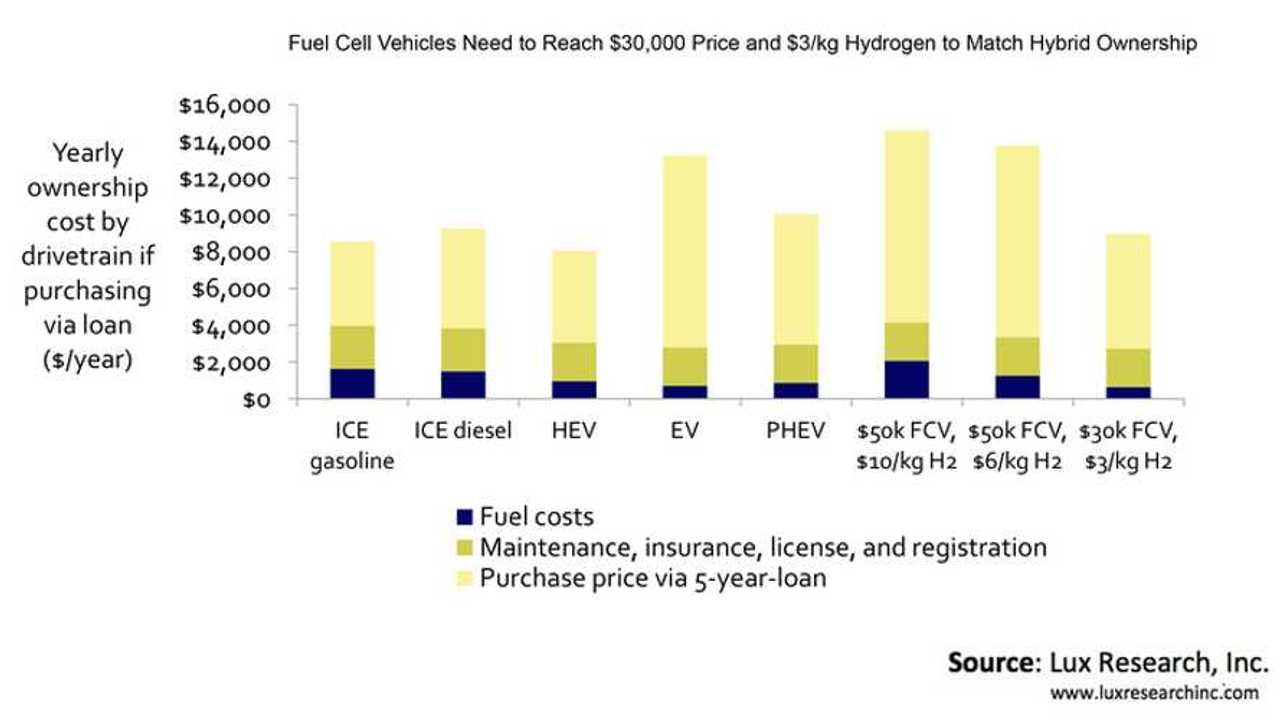 Currently, FCVs are the most expensive of all type of powertrains analyzed and, according to Lux Research, in the near future there is no chance FCVs will be a viable option.

"As countries around the world look to the prospect of a hydrogen economy, fuel cell vehicles (FCVs) will be first major opportunity to spearhead an effort that could eventually also include stationary energy and broad infrastructure. Automotive OEMs like Hyundai, Toyota, and Daimler are committed to bringing thousands of FCVs to market over the next few years, but until FCVs reach prices of about $30,000 and hydrogen is $3/kg, the total cost of ownership advantage will remain with conventional engines and hybrids. Although Hyundai is already giving free hydrogen to initial FCV adopters, we find this strategy will cost tens of millions of dollars even at low volumes. Interestingly, due to their aggressive cost reduction efforts on fuel cells, automotive OEMs will have an opportunity to enter stationary energy and offer financing. Finally, although OEMs and government have already invested billions, we anticipate that about $180 billion to $800 billion will be required by various individual regions to adopt a full-fledged hydrogen economy. In likely absence of such funding, shift to hydrogen will not happen before 2040, if ever."

Strong incentives to buy FCVs and free hydrogen for early adopters should help to bring the first batch of fuel cell cars on the roads, but in the long term price must be cut by almost half from today's Toyota Mirai $57,500 and moreover hydrogen prices must be lowered to $3 per kg.

All-electric cars, despite still too high prices for volume adoption, are on the eve of 200 miles at $35,000 (that's what some companies promise) and come without the need to lower electricity costs or build a whole infrastructure (at least home charging is available in most cases).

Another problem is that manufacturers must gamble with investment in fuel cells:

"A $30,000 price point and hydrogen at $3/kg makes the FCV option less costly than both the PHEV and EV option, and approaching the cost of ownership of ICE and HEV drivetrains. However, Lux notes, this optimistic case requires a major OEM to commit to producing hundreds of thousands of units, independent of proven demand, with an EV-like $5+ billion risk (similar to Nissan-Renault or Tesla-Panasonic factories) that built huge scale first. There is no guarantee to OEMs that such a risky bet would work out, Lux cautions."

"OEMs will enter markets cautiously, each selling only thousands of FCVs per year this decade, and deploying a total of 700,000 FCVs on the road by 2030, in an effort to meet regulations while minimizing their losses on these initially unprofitable vehicles. Why so pessimistic? Despite attempts to entice initial buyers with free hydrogen and subsidies, the long-term economics do not enable these strategies to scale to mass-market success; subsidies will eventually expire and FCV costs will remain high. This will also require some pretty remarkable infrastructure investment to go along for the ride."

For suppliers associated with fuel cells and hydrogen, the rodeo is gearing up (similar to lithium-ion battery):

"It is the strength of partnerships (and the creativity thereof) between OEMs, infrastructure gas specialists, Tier 1 suppliers, and chemicals and materials leaders that will separate the fuel cell survivors from those that fail."