Plug-in Car Sales Soared Off The Charts In UK - 3,100 In September 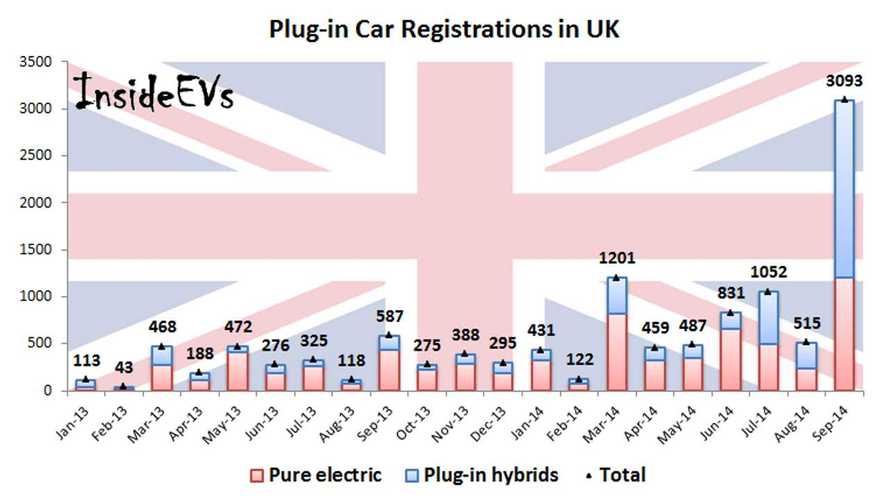 Electric car sales in the UK literally exploded last month and September's advantage is so overwhelming that we could forget all the previous records on the graph.

Well, we expected that September would bring strong results, but who would've thought 3,100? (last year it was just 597 sold in the UK in September 2013).

We were eagerly looking forward to press releases from Mitsubishi, as we suspected that most of plug-in hybrids sold belong to Outlander PHEV.

And Mitsubishi confirmed that Outlander PHEV accounted for over half of all UK plug-in vehicle sales in September. The 1,000-unit mark was crossed, meaning that Mitsubishi almost doubled its Outlander PHEV sales in the UK compared to last month.

“September was a strong month across the range, closing our third quarter with sales more than double the same period last year. There is a great feeling across the Mitsubishi network, which is quickly expanding its staff numbers, that this will be a special year”.

On the all-electric side, we are in better position to see the leaders because Nissan already issued a press release and announced the best sales month ever in a single European market for the LEAF.

851 LEAFs sold in September in UK is well over the 630 record from March and even higher than the all-time record of 703 in Norway.

"Figures released today by the Society of Motor Manufacturers and Traders (SMMT) show the Nissan LEAF clocked up 851 sales during September, up 156% on the same month last year (332 sold), and topping March 2014 (the previous record month) when 630 were sold. This strong performance was not only a record for the UK, but represents the largest volume of Nissan LEAFs ever sold in one month in a European market*.

* The previous European record was achieved by Norway in March 2013 when 703 Nissan LEAFs were retailed in the month."

"Sales of the British-built Nissan LEAF have already bettered the total number of units sold in 2013 (1,812 in total), with 2,969 cars sold so far this year, proving that the model's practicality and low running costs, coupled with its unique driving experience, are keeping it ahead of the competition.

"Sales of the all-electric Nissan LEAF continue to go from strength to strength and it's no surprise that the vehicle that pioneered the EV sector in the UK continues to blaze the trail for the rest of its class."

"September's result gives us a clear indication that motorists are beginning to recognise that switching to a Nissan LEAF is not a compromise but an opportunity."

"With a performance that matches many of its traditionally-powered competitors and the availability of charging infrastructure accelerating, the LEAF truly is a compelling choice and we fully expect to see sales continue to flourish."