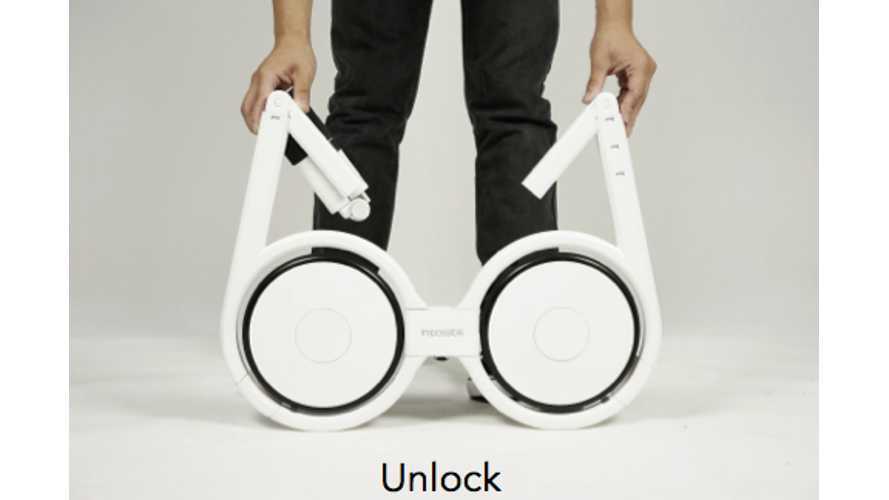 While we're on the subject of Silly Scooters, let's not pass up the "Impossible".  Aptly named, from a group of four enterprising young Kickstarter guys who call themselves "Impossible Technologies", it's, well, impossible.  That didn't prevent it from being a fully funded on Kickstarter, however.

Right? So why are we skeptical?  Well, when we take a look at the video on the Kickstarter page, the structure seems a bit sketchy, but we're going to give them the benefit of the doubt.  Hey, it's a prototype, right?  But then there's ... the maths

We got to this:

...after cleaning up the keyboard from lol'ing with a mouth full of coffee, we got out the calculator.  How much energy does a scooter need?  How much does it use?

The Go-Ped is a good, established brand  with some great specs for a wide range of styles of product, so we looked over there for a very basic metric: Watt-hours per mile.  Here's the graph of the Go-Ped product line:

Don't panic, this is pretty easy maths.  First, what's a Watt-hour?  Let's start with a Watt.  A Watt is simply Amps x Volts.  It's how you can compare, say, something that gives you 400A at 12V to something that gives you 20A at 200V, just for example.  (The first example is 4800W, the second is 4000W) A Watt-hour is a really useful battery pack number that tells you how much energy a pack holds regardless of the voltage or capacity of whatever cells you're using and however you have them configured.  It's a way to compare two packs - like a scooter pack and a Nissan Leaf pack - that are configured in vastly different ways, really easily.  Let's start with the GoPed packs.

Just to finish our tutorial, let's figure the most useful number for most EVs - the Wh/mile.  That's a great number for evaluating the efficiency of any EV, from a scooter to a Tesla.  The Go-Ped, assuming their numbers are pretty good, is getting 200Wh for 5 miles.  That's 40Wh/mile - again, "Turbo" mode.  "Economy" mode looks like about 20Wh/mile. A Brammo Empulse with a 10,000 Wh pack gets about 100 miles of range, so it's pulling about 100Wh/mile - pretty standard for a motorcycle.  So the Impossible's claim of 12 miles on a 100Wh pack?  Under 10 Wh/mile.

For example - If the Brammo could get 10Wh/mile, they'd be giving you, what?  Oh, 1000 miles of range on one charge?  Giving the Impossible a generous estimate of 20Wh/mile, with a 100Wh pack you get range of 5 miles, not the 12 claimed. Far more likely is about 2 miles, and that's running your pack to dead flat - something you only get to do a few times before it becomes a brick.

Our Latin is a little rusty, but there's got to be some twist on "caveat emptor", for "Silly misleading Kickstarter project backer beware", isn't there?