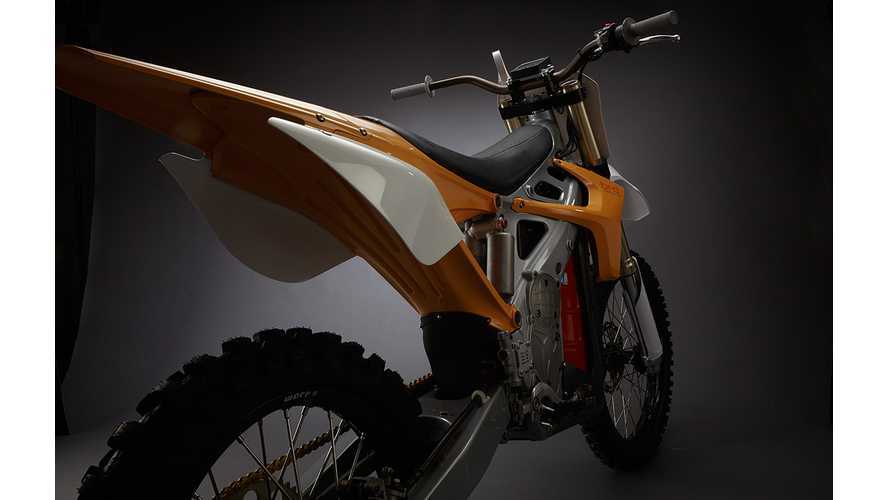 BRD announced on its Facebook page that it received $4.5 million in Series A funding, linking a story on the Wall Street Journal blog, here.  In addition, BRD announced (finally) the official launch of two race-bred bikes, the Redshift MX and Redshift SM at the AIMExopo in Orlando next week.  The MX (motocross) is "...barely legal - a race bike with lights. Designed for MX2/Lites class racing, the MX light and quick, without the lost seconds from hunting through gears trying to find torque."  The SM (supermotard) is a little more staid, and with the tongue-in-cheek disclaimer: "Feel free to beat on it, but remember: just because it is fully capable of launching stair gaps and airing out the crests of San Francisco hills does not mean we condone that use or behavior in any way."

From the BRD site, some impressive specs for the MX, especially in the energy-density department:

The SM is more in the Supermoto category, a little heavier with smaller diameter wheels, but still impressive at only 265lbs.

From the Wall St Journal story, it appears BRD has some backing from some major, and respectable sources:

The funding brings BRD’s total capital raised to $8.2 million. The company previously raised a seed round of $3.7 million from individual investors.

...with a goal of worldwide sales:

According to BRD investor Mr. Zapata Gil, a lifelong motorcycle enthusiast whose real-estate firm Baluarte sponsors an endurance racing team in Spain, investors expect BRD to market its bikes not only to riders and enthusiasts in the U.S. but in Europe as well.

“Ramping up production and gaining brand recognition will be a focus for the company in the next two years,” he said. Longer term, he expects the company to introduce a range of high-performance EV bikes, that will “beat internal combustion engine on their own terrain.”

This, along with the recent news of the KTM FreeRide E release and the continuation of the Zero FX model, bodes well for the light, on/off-road electric bike movement afoot - though, at a price point of the race-only MX for $14,995 and the street-legal SM for $15,495, they still seem to be in the class of, "If you have to ask how much..."

In the meantime, we can enjoy this video of the SM model ripping up the streets of San Francisco from a few years ago.