Revealed: 2016 Chevrolet Volt Gets Seating For 5 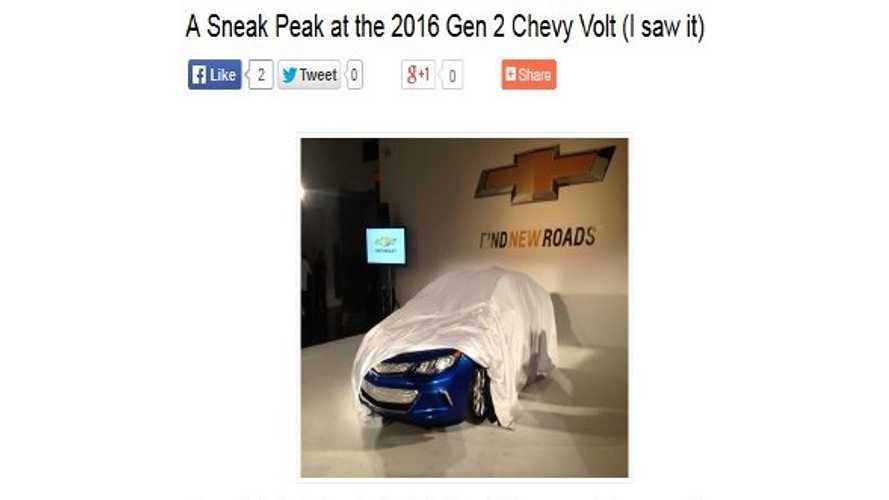 Whenever an automaker requires the signing of a non-disclosure act, there will be some individuals (typically not members of the media) who break that agreement.

At the 2016 Chevrolet Volt teaser party held at an undisclosed location in the Los Angeles area, General Motors hosted current Volt owners.  This event was off limits to the media, but of course we're fully aware of how the event unfolded.

General Motors execs pulled back a drape covering the 2016 Volt to reveal part of the plug-in vehicle's front end.  Pictures were taken and later posted all over the Internet.  Those in attendance were then led into another more private room in groups of 10 (we believe).  No cameras or phones allowed.  The entire vehicle (pre-production form) was shown briefly to those allowed in the "back room."

The non-disclosure agreement states something along the lines of what was seen and discussed in this "back room" cannot be revealed at this time.

Well, as we stated at the start of this article, the forced signing of a non-disclosure act basically guarantees it will be broken.

From multiple sources who were in that "back room," we can confirm that the pre-production 2016 Chevy Volt has seating for 5.

Granted, the one they showed was a pre-production version so there might be tweaks – but there was a bench in the back between the two original seats. It looks designed to put an infant/child seat there, but not space for an adult/young adult to sit.

And here's the seating description from another source who attended the "back room" event:

"You can sit 3 in the back but the middle person will straddle the hump."

Those are but 2 examples confirming seating for 5 from the perhaps dozen or so we've seen leaked now.

As for other aspects of the 2016 Volt (range & powertrain), here's some info from one source who was in attendance:

Yes and yes. No specifics yet, but yes. More EV range and more gas range likely. I believe people’s speculations around 50 miles EV would not be unreasonable to believe.

More low end torque because of completely redesigned transmission. Both motors power the car even from 0 instead of just one motor! There’s 5 modes of operation... It is a clean sheet design – it does not operate like Gen 1 Volt.

It's up to you to believe whether or not the shared info is accurate.  We at InsideEVs now fully believe the seating for 5, as we've confirmed that intel with multiple sources who were in attendance.  5 adults?  Probably not, but 4 and a child seat seems doable.