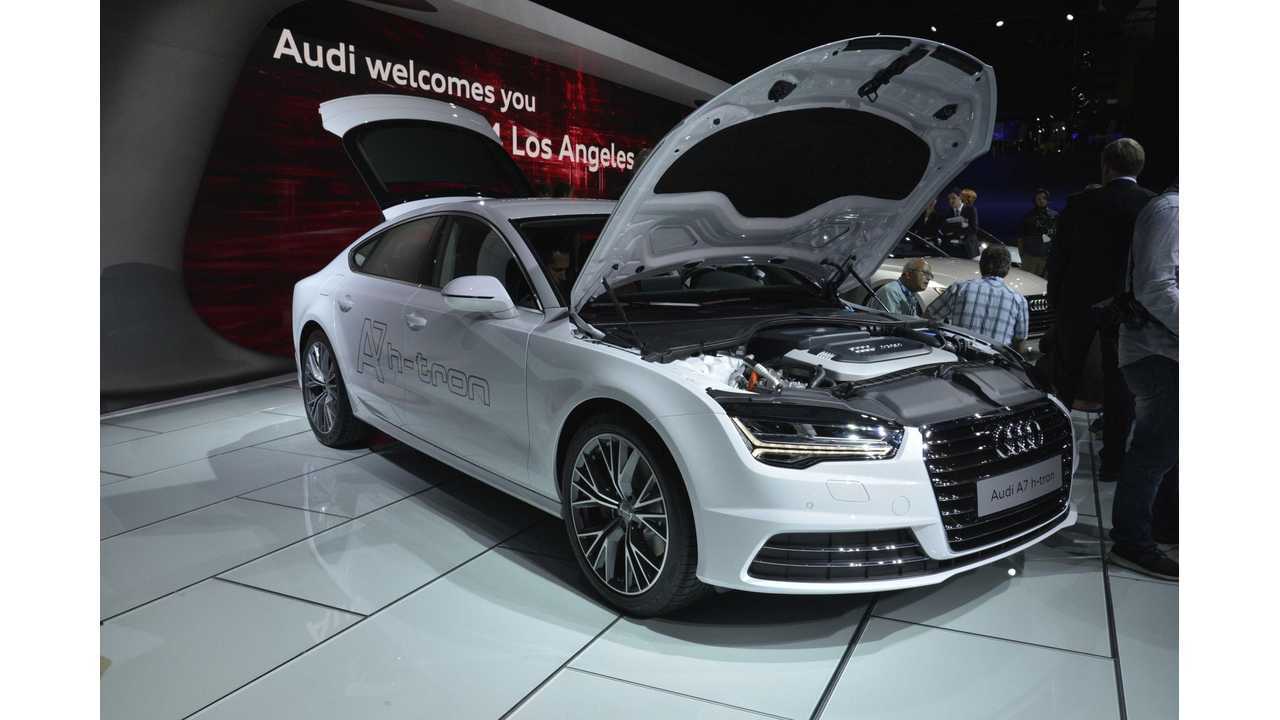 But this one is more interesting, as this is a plug-in fuel cell vehicle, with an AC charging inlet. 2 hours is the time it takes for full recharge of the 8.8 kWh battery pack - up to 31 miles (50 kilometers).

And this is, of course, a lithium-ion battery pack (not NiMH like in the case of Toyota Mirai).

Each motor can deliver 85 kW or 114 kW (if the voltage is temporarily raised) and has peak torque of 270 Nm.

According to Audi, the fuel cell achieves efficiency of as high as 60 percent, but operates across a temperature range of 80 degrees Celsius and demands more cooling than an equivalent combustion engine.

"It covers over 500 kilometers (310.7 mi) on one tank of fuel – and its exhaust emits nothing more than a few drops of water: The A7 Sportback h tron quattro uses a powerful, sporty electric drive with a fuel cell as its energy source, in combination with a hybrid battery and an additional electric motor in the rear. Its drive configuration makes the emission-free Audi A7 Sportback h-tron quattro a quattro through and through, with 170 kilowatts of power at its disposal – a new departure in fuel cell cars. There is no mechanical connection between the front and rear axles. As an e quattro, the A7 Sportback h-tron quattro features fully electronic management of torque distribution."

"Like a car with combustion engine, refueling takes no more than around three minutes. The range is boosted by up to 50 kilometers (31.1 mi) by a battery with a capacity of 8.8 kilowatt hours, which is recharged by recuperation or alternatively from a power socket. As a plug-in hybrid, the A7 Sportback h-tron quattro will thus have crucial extra range in reserve." 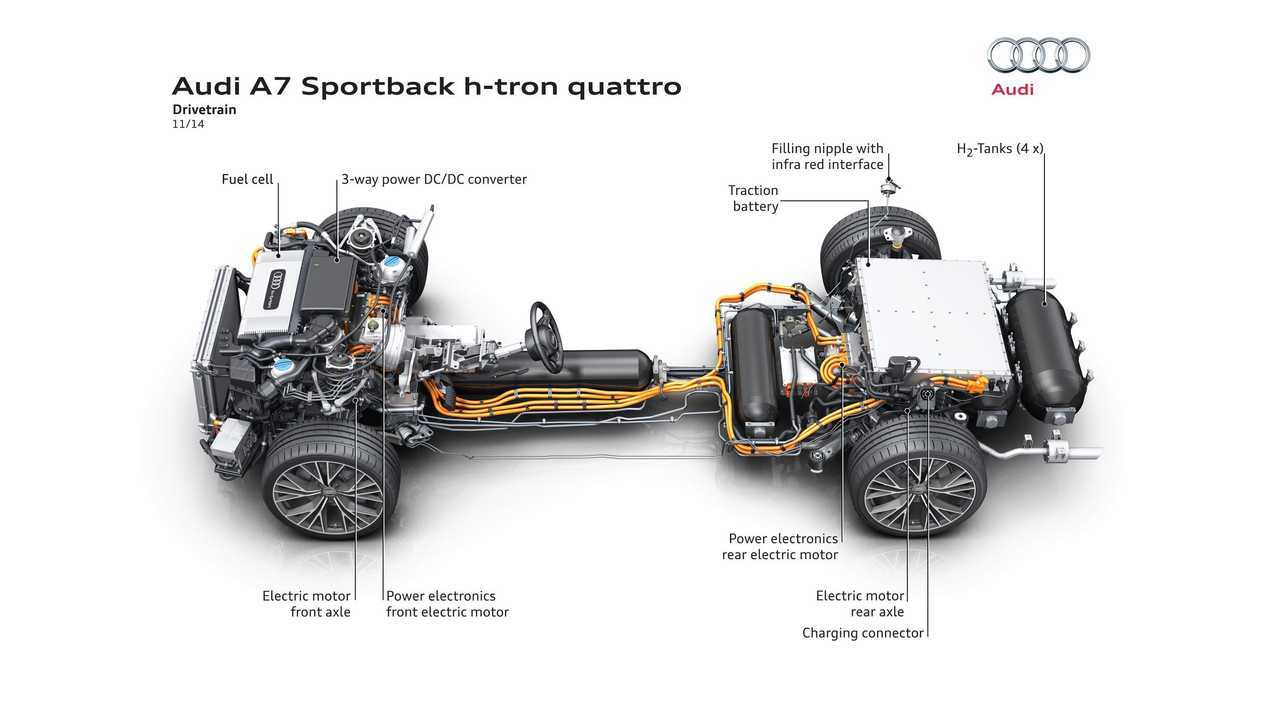 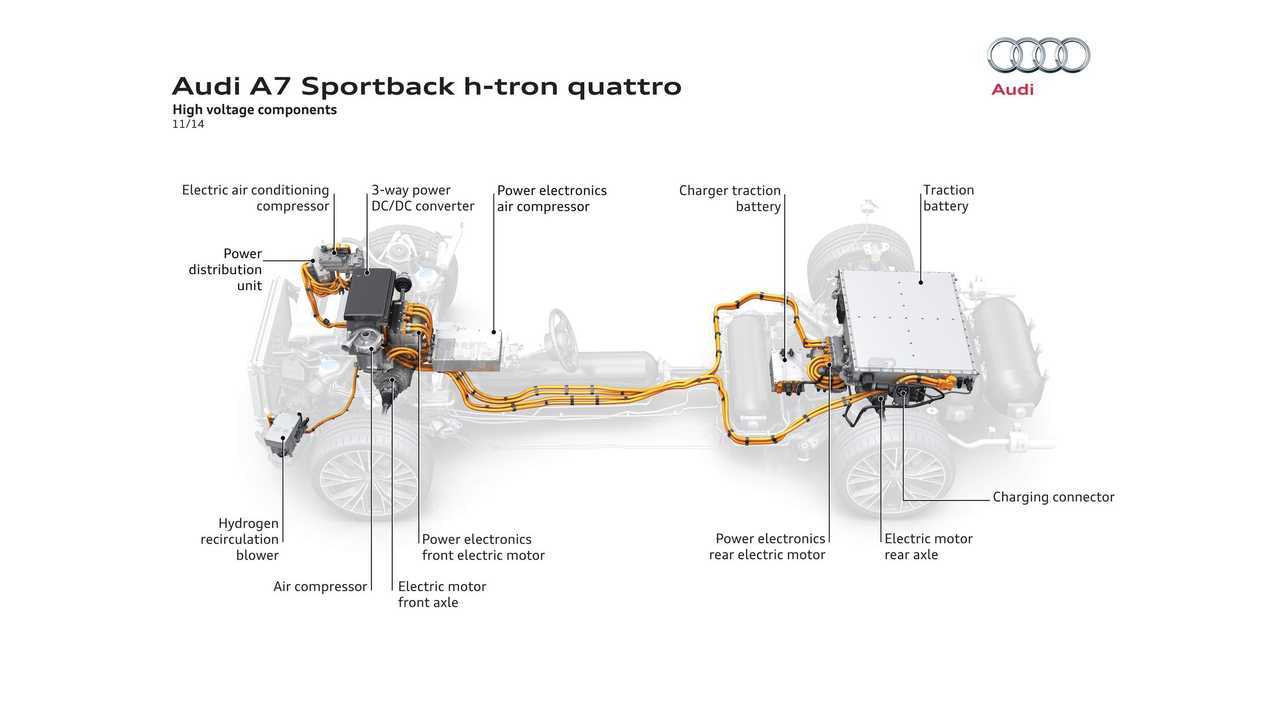 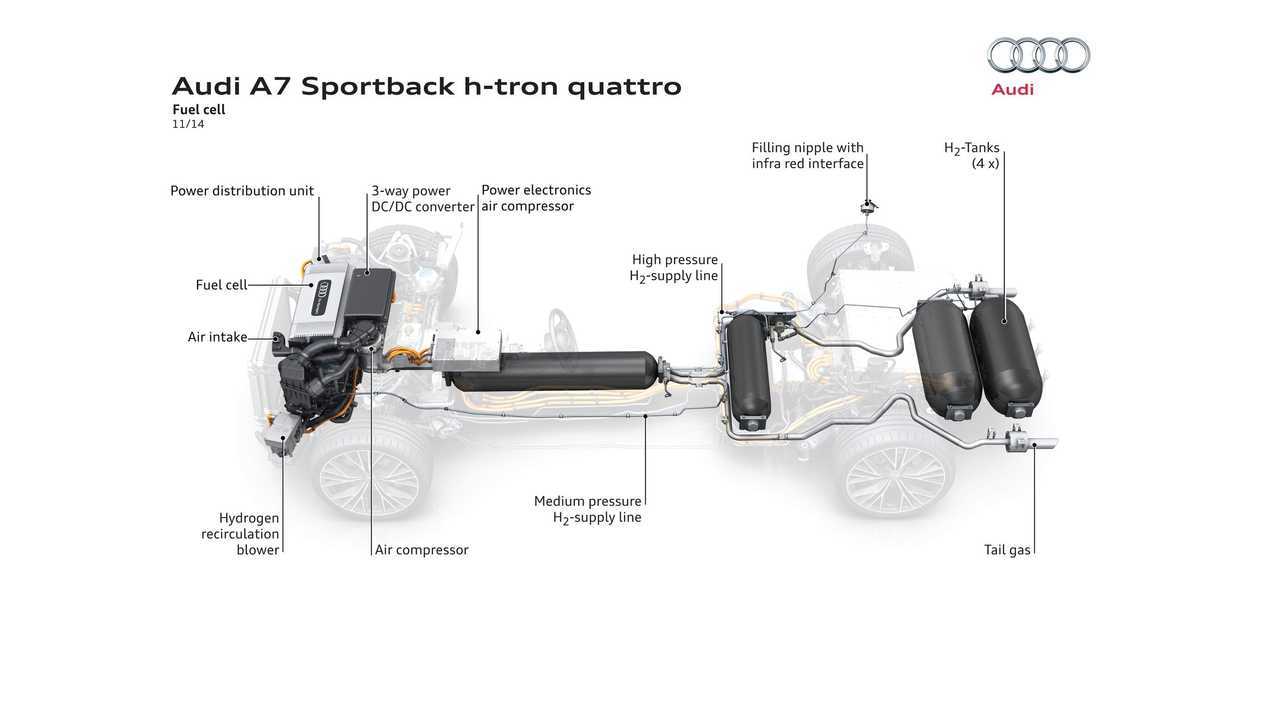 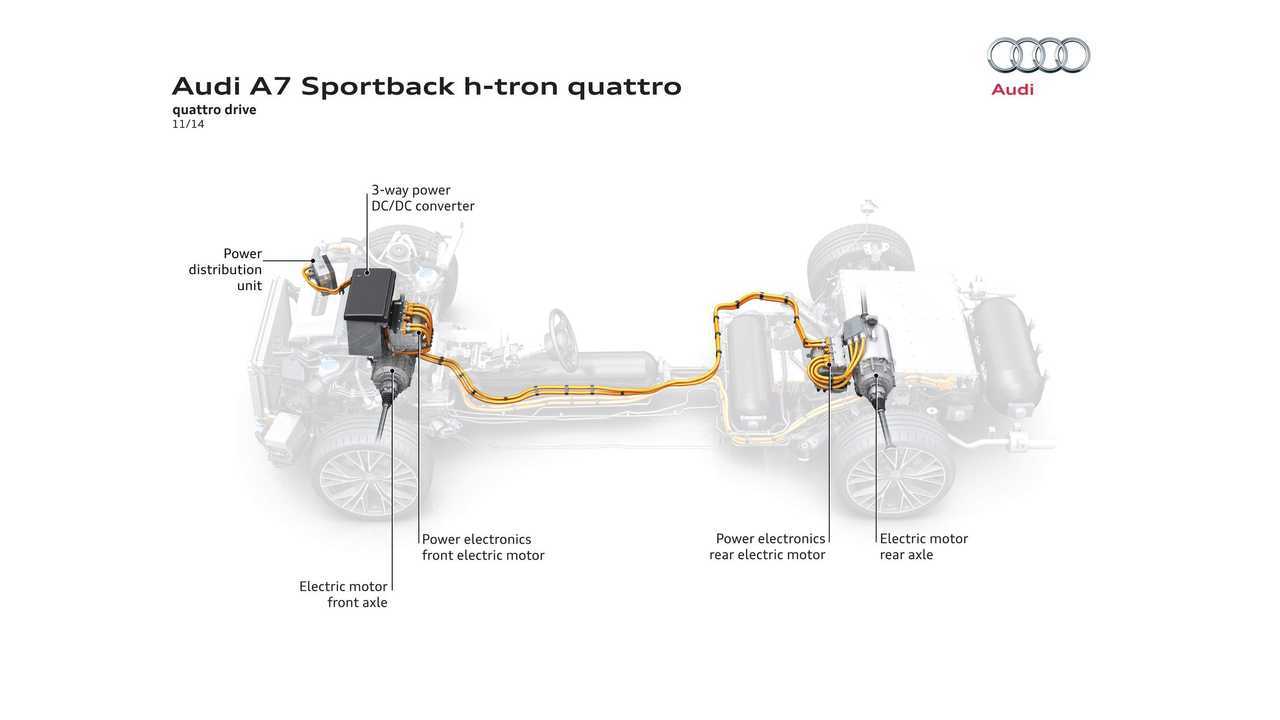 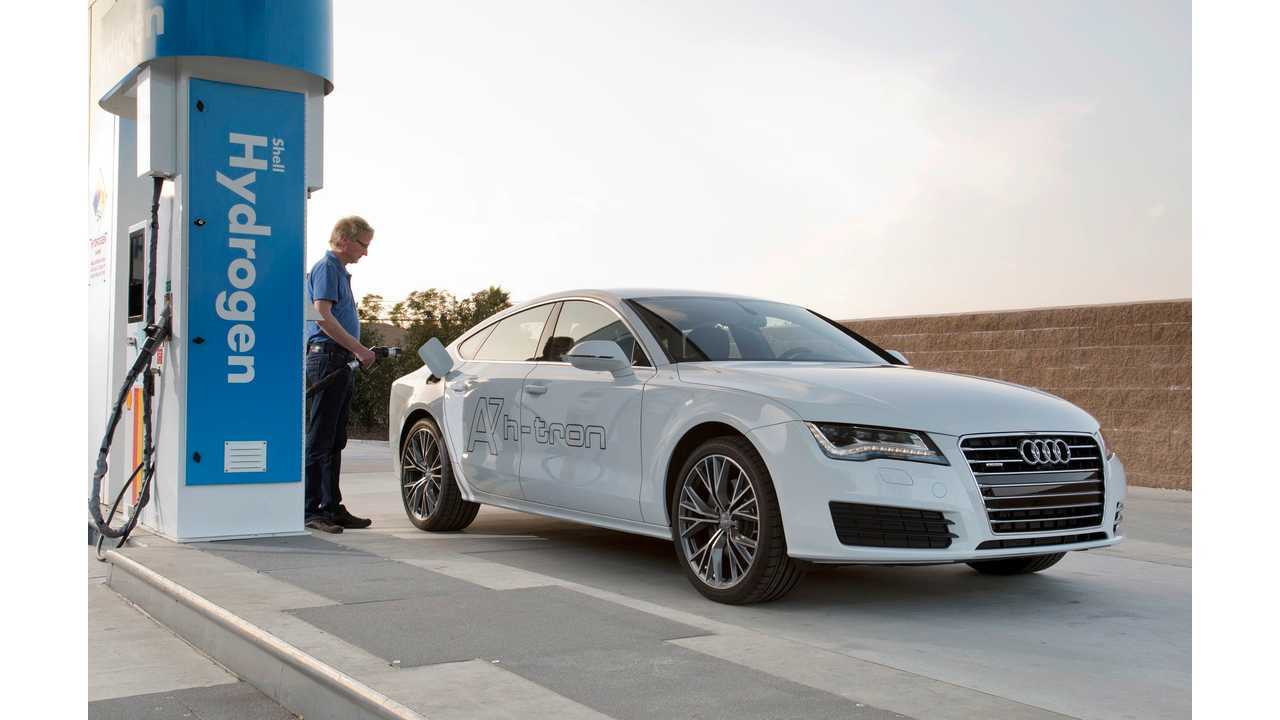 "The Audi A7 Sportback h-tron quattro

It sprints from 0 to 100 km/h (62.1 mi) in 7.9 seconds and on to a top speed of 180 km/h (111.8 mph). It covers over 500 kilometers (310.7 mi) on one tank of fuel – and its exhaust emits nothing more than a few drops of water: The A7 Sportback h-tron quattro, which Audi is unveiling at the Los Angeles Auto Show 2014, uses a powerful, sporty electric drive with a fuel cell as its energy source that operates in combination with a hybrid battery and an additional electric motor in the rear. The overall electrical system power of 170 kW is transferred to both the front and the rear wheels. This drive configuration makes the emission-free Audi A7 Sportback* a quattro through and through – a new departure in fuel cell cars.

“The A7 Sportback h-tron quattro is a genuine Audi – at once sporty and efficient. Conceived as an e-quattro, its two electric motors drive all four wheels,” explained Prof. Dr. Ulrich Hackenberg, Member of the Board of Management for Technical Development at Audi. “The h-tron concept car shows that we have mastered fuel cell technology. We are in a position to launch the production process as soon as the market and infrastructure are ready.”

The “h” in the name h-tron denotes the chemical element hydrogen. In visual terms the technology demonstrators that Audi has brought along to the Los Angeles Auto Show basically resemble the production models. As the label with the h-tron signet reveals, this concept car now takes its place alongside the other Audi models with alternative drive principles, the e-tron and g-tron. Externally, there is no other evidence of the fuel cell that converts hydrogen into electrical power on board the vehicle. 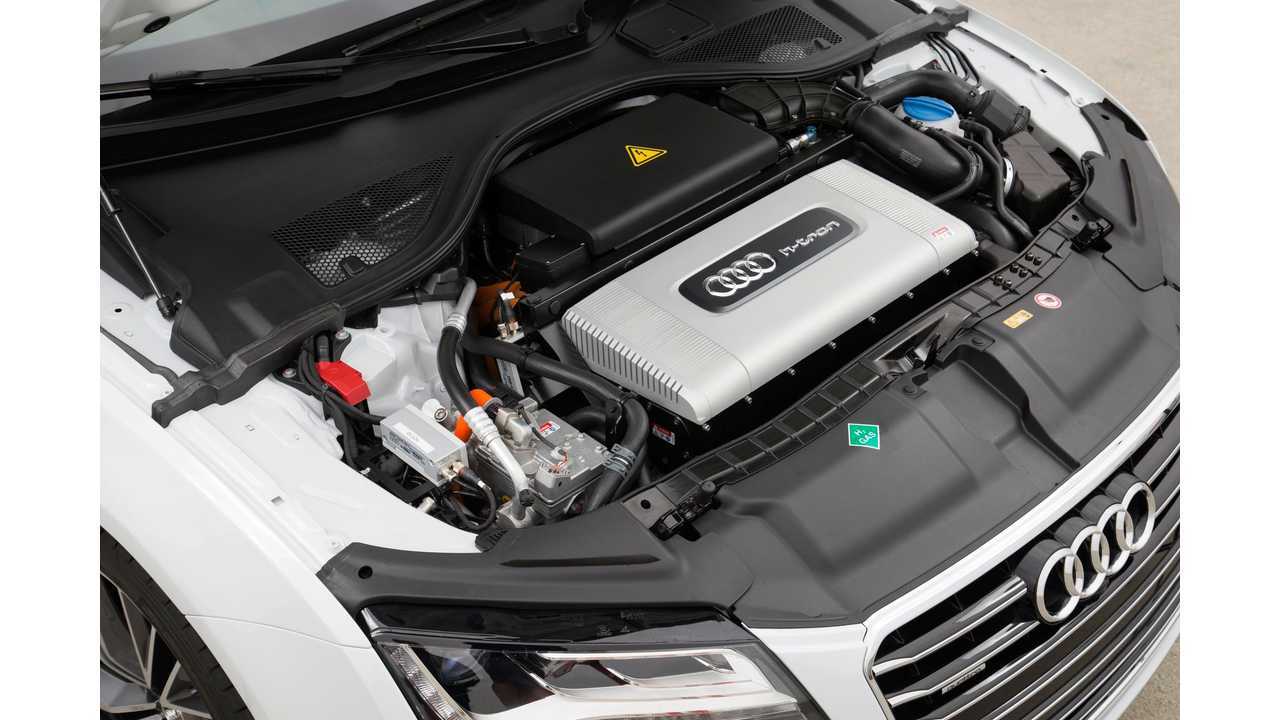 The crucial differences are beneath the hood of the A7 Sportback: The fuel cell in the Audi technology demonstrator is installed at the front, mirroring the conventional A7 Sportback with combustion engine. Because the exhaust system only has to handle water vapor, it is made of weight-saving plastic.

The fuel cell itself comprises over 300 individual cells that together form a stack. The core of each of these individual cells is a polymer membrane. There is a platinum-based catalyst on both sides of the membrane.

This is how the fuel cell works: Hydrogen is supplied to the anode, where it is broken down into protons and electrons. The protons migrate through the membrane to the cathode, where they react with the oxygen present in air to form water vapor. Meanwhile, outside the stack the electrons supply the electrical power – depending on load point, the individual cell voltage is 0.6 to 0.8 volts.

The entire fuel cell operates in the voltage range of 230 to 360 volts. The main auxiliary assemblies include a turbocharger that forces the air into the cells, the so-called recirculation fan – it returns unused hydrogen to the anode, thus increasing efficiency, and a coolant pump. These components have a high-voltage electric drive and are powered by the fuel cell.

There is a separate cooling circuit for the essential cooling of the fuel cell. A heat exchanger and a thermoelectric, self-regulating auxiliary heating element maintain pleasant temperatures in the cabin.

The fuel cell, which operates across a temperature range of 80 degrees Celsius, places higher demands on the vehicle cooling than an equivalent combustion engine but achieves superior efficiency of as high as 60 percent – almost double that of a conventional combustion engine. Its cold-starting performance is guaranteed down to -28 degrees Celsius. 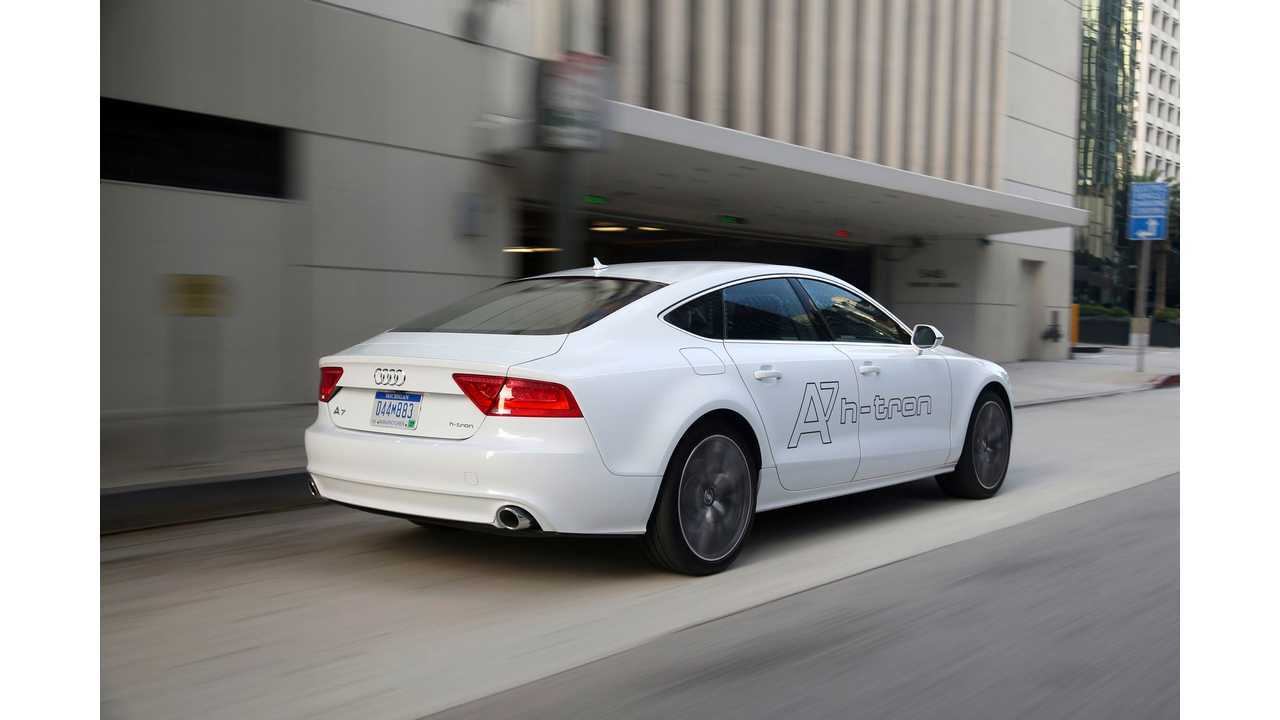 A special feature of the A7 Sportback h-tron quattro is its plug-in hybrid concept – this represents a logical evolution from the Audi A2 H2 and Q5 HFC test cars. It has a lithium-ion battery on board that can be recharged from the power socket by lead; with an 8.8 kWh energy capacity, it has been adopted from the A3 Sportback e-tron*. It is located beneath the trunk and has a separate cooling circuit for thermal management.

This high-performance battery makes the ideal partner to the fuel cell. It can store energy recovered from brake applications and supply considerable power for full-load boosting. This paves the way for impressive acceleration, making the A7 Sportback h-tron quattro truly live up to quattro standards. Both the front and rear axles have no mechanical connections for the transmission of power. In the event of slip, the torque for both driven axles can be controlled electronically and adjusted continuously.

On battery power, the Audi A7 Sportback h-tron quattro covers as much as 50 kilometers (31.1 mi). The battery in the rear of the plug-in hybrid can be recharged by lead. Depending on the voltage and current rating, a full recharge takes between two hours (industrial power socket/360 volts) and four hours (domestic power socket at 230 volts).

The battery operates at a different voltage level to the fuel cell. For that reason, there is a DC converter (DC/AC) between the two components. This tri-port converter is located behind the stack. In many operating statuses it equalizes the voltage, enabling the electric motors to operate at their maximum efficiency of 95 percent.

The two electric motors, which are cooled by a low-temperature circuit together with the voltage converters, are permanently excited synchronous machines. Each of them has an output of 85 kW, or even 114 kW if the voltage is temporarily raised. The peak torque is 270 Newtonmeters (199.1 lb-ft) per electric motor.

The electric motors’ housings incorporate planetary gear trains with a single transmission ratio of 7.6:1. A mechanical parking lock and a differential function round off the system. 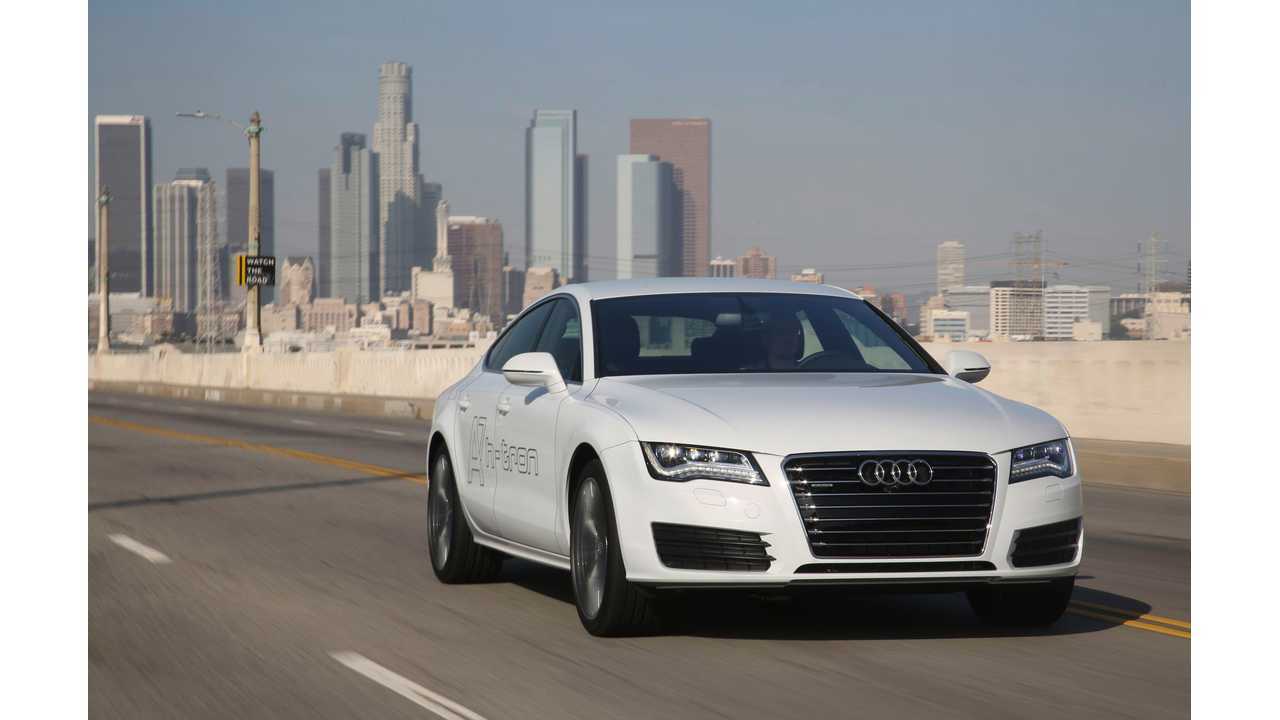 Driving in the Audi A7 Sportback h-tron quattro offers the full appeal of electric drive in conjunction with the new e-quattro. The silent propulsion is fully available from the off, and the fuel cell reaches its maximum output within one second at full load – a more dynamic response than a combustion engine because the entire drive system involves only a few mechanical components.

With 540 Nm (398.3 lb-ft) of propulsive power at its disposal the Audi A7 Sportback h-tron quattro, which tips the scales at only around 1,950 kilograms (4,299.0 lb), races from a standstill to 100 km/h (62.1 mph) in 7.9 seconds. Its top speed is 180 km/h (111.8 mph) – a top figure for its field of competitors. The e-quattro concept requires precise coordination of the electric motors – the technology demonstrator offers a sporty, stable and high-traction drive that is comparable to a production car with mechanical quattro drive.

A power meter – in the place of the revolution counter in the instrument cluster – informs the driver of the momentary power flow. The outer sections show the fuel level in the hydrogen tank and the level of battery charge. Graphics on the MMI monitor visualize the energy flow. When the driver presses the EV button, the technology demonstrator drives solely on battery power.

Switching from automatic transmission mode D to S increases the level of energy recovery when braking, so that the battery is charged up effectively during sporty driving. Brake applications, too, are almost always accomplished fully electrically: The electric motors then act as alternators and convert the car’s kinetic energy into electrical energy that is stored in the battery. The four disk brakes only become involved if more forceful or emergency braking is required.

The tank flap is in the right side section of the five-door coupé, concealing a filler connector for the hydrogen. Fully refueling with H2 takes around three minutes, roughly as the same as a conventional automobile. The tanks communicate with the refueling system by infrared interface and equalize the pressure and temperature levels. 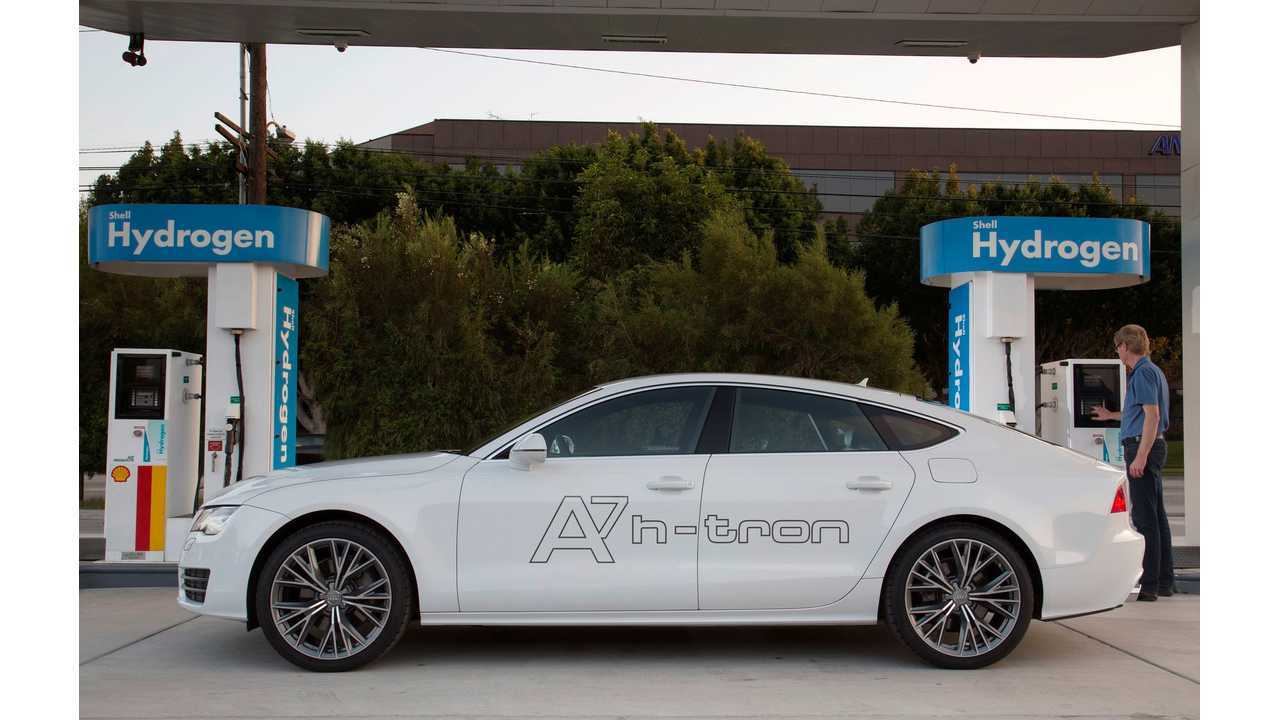 The four hydrogen tanks of the Audi A7 Sportback h-tron quattro are located beneath the base of the trunk, in front of the rear axle, in the center tunnel. An outer skin made from carbon fiber reinforced polymer (CFRP) encases the inner aluminum shell. The tanks can store around five kilograms of hydrogen at a pressure of 700 bar – enough to drive over 500 kilometers (310.7 mi). According to the NEDC cycle, fuel consumption is roughly one kilogram (2.2 lb) of hydrogen per 100 kilometers (62.1 mi) – an amount with an energy content equivalent to 3.7 liters (1.0 US gal) of gasoline.

It is already the case that the A7 Sportback h-tron quattro always travels with zero local emissions. By using the renewable fuel hydrogen, it can also be used globally as a zero emissions vehicle: Since 2013 Audi has been operating a pilot plant in which renewable wind power is used to produce hydrogen by electrolysis. At present, this hydrogen is still used in an additional production process to obtain synthetic methane (Audi e-gas). A future move to feed this hydrogen into a hydrogen supply and filling station network would make it available for refueling fuel-cell vehicles. This is a sound option for sustainable mobility with no emissions." 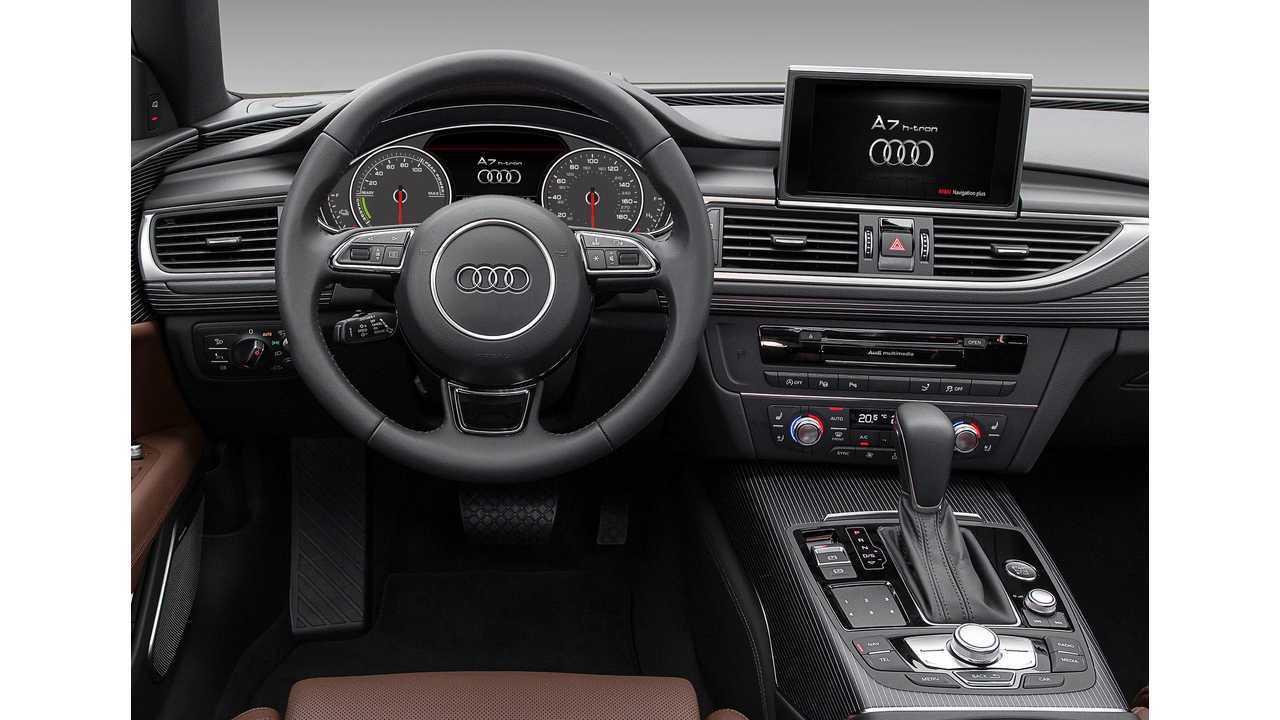 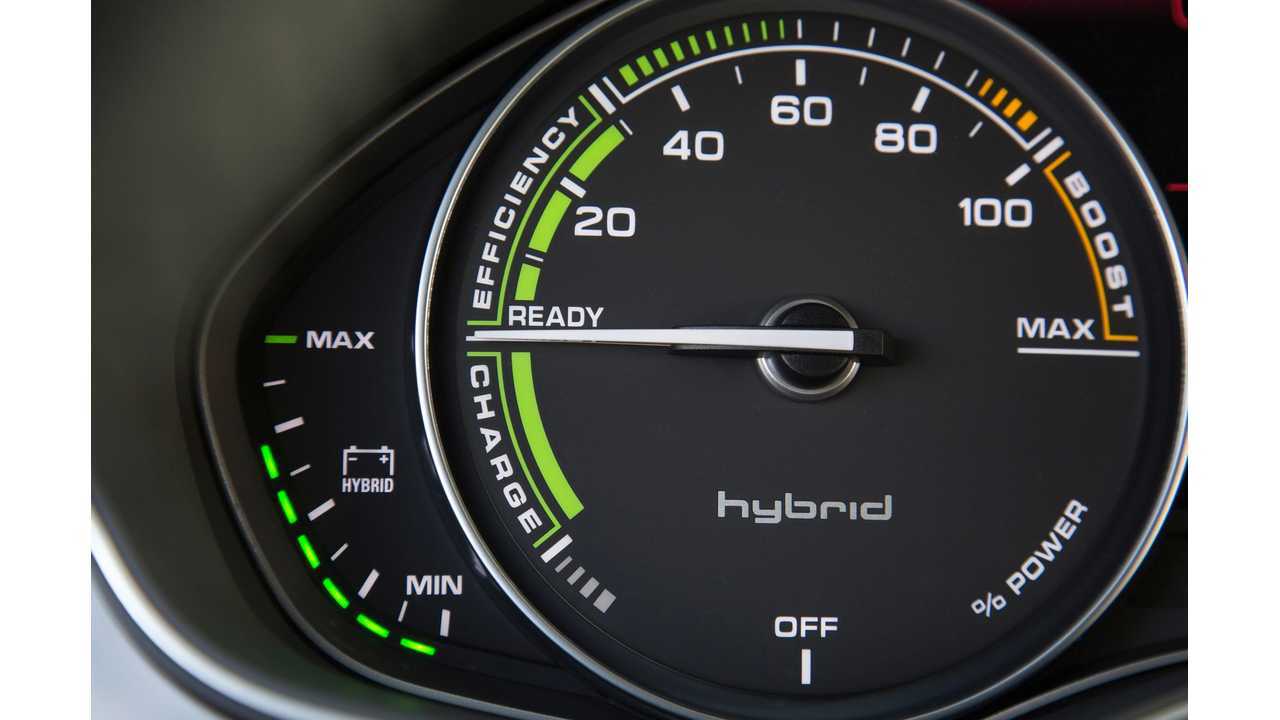