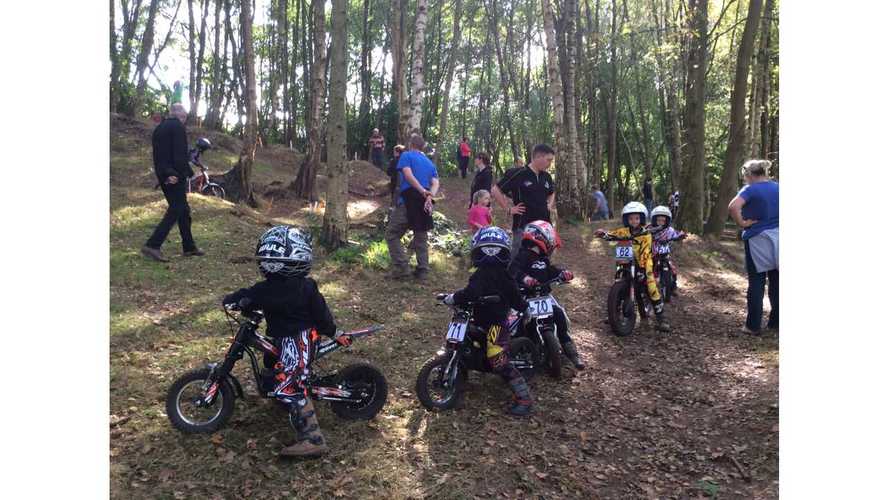 InFront Motorcycles has confirmed its "Oset Cheshire Cup Fun-Trial" date of January 11, 2015 on its site:

The next Oset Cheshire Cup Trial date has been confirmed. January 11th sees this popular series at an all new venue. Hales Superbole, Board & Bike Park, Harthill, Cheshire, CH3 9LQ (www.halesboardandbikepark.com) will host their first ever trial. They have also opened the doors for practice at anytime for electric trials on a pay/ride basis – feel free to contact the guys there to discuss availability.

The trial will be all electric, no petrols allowed! We will also be using an undercover area to present the 2014 championship awards before the start. The event will be a fun-trial so gives a chance for the riders to adapt to their new bikes from Santa before the 2015 championship gets underway in March.

The next generation, riding electric

Infront Motorcycles is a shop in Chester (UK):

Founded 4 years ago by, motorcycle racer and enthusiast, James Powell it quickly outgrew it’s original premises and progressed to its current location in 2013. The company now sits as a major player in many areas, most notably motorcycle tyres where we are able to offer a wealth of experience for both road and track applications, alongside some of the best prices nationwide.

And, okay, but forgive us.  The only word that comes to mind when we see little tiny kids on little tiny bikes all bundled and helmeted and gloved and booted is, well, "adorable".  Look at last year's video and tell us we're wrong: