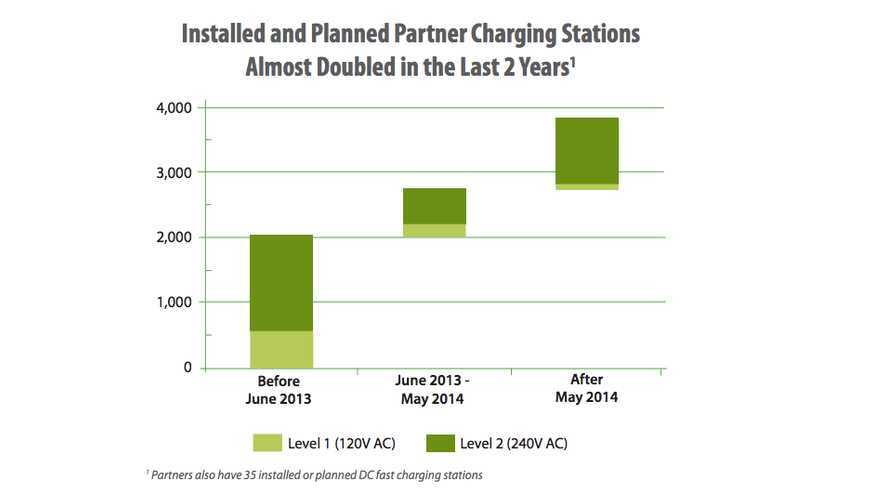 Charging Infrastructure: Do You Have a Workplace Charging Station?

Looks like more employers around the U.S. are providing access to electric charging stations at workplaces and, specifically, via the workplace charging challenge led by the Department of Energy (DoE). At the Workplace Charging Challenge Summit on Tuesday, the vehicle technologies group inside the DoE released results from its recent survey of 117 workplace charging partners during the plenary session. The DoE conducted this survey in August 2014

The workplace charging partners are U.S. companies that have signed on to the DoE led effort, called EV Workplace Charging Challenge, which promotes the installation of electric vehicle charging stations or access to 120V outlets in parking garages and lots.

At today’s charging summit in Washington D.C., the DoE announced that there are 150 workplace charging partners, up from approximately 50 partners at this time last year, and there are more than 300 work sites with charging stations in 40 states.

“Workplace partners are working to promote this (charging) and make this access available to 600,000 plus employees with access at their worksite. That’s a huge footprint of people pulling in to work and being able to plug-in," says Sarah Olexsak, workplace charging coordinator at the DoE.

This survey examines early experiences at the workplace and found that “81 workplaces reported an average of 10 kWH of electricity per charging station per day,” says Olexsak. This is from 81 work sites only, as 40 percent of the respondent partners were able to tell us (DoE) of their electricity utilization.” Olexsak adds the DoE will focus on working with partners to track their electricity better.

Are employees taking advantage of charging at work? Olexsak says, “90 percent of our respondents to this survey say these existing charging stations being fully utilized, at least, five days a week." Out of the 117 charging partners in August, this survey had 80 percent response rate.

The workplace charging program is in year two and financial incentives at a federal level began to expire in 2014. So did that affect growth of charging installations in 2014?

“Prior to May 2013, 20 percent of employers took advantage of financial incentives. In the past year, it dropped to four percent. So even though of number of locations are up and there’s an expansion happening,” Olexsak adds.

● 80 percent of employers do not charge a fee to electric vehicle drivers, while fifteen percent charge a fee based on electricity usage and five percent pay a fixed fee. ● 60 percent of the DoE’s current workplace partners are helping other businesses with questions and challenges related to charging. ● Electric vehicle drivers are quite satisfied with charging stations being available at the workplace and have communicated their satisfaction to their employers.

To read more results of the study, visit http://1.usa.gov/1uLAfnm