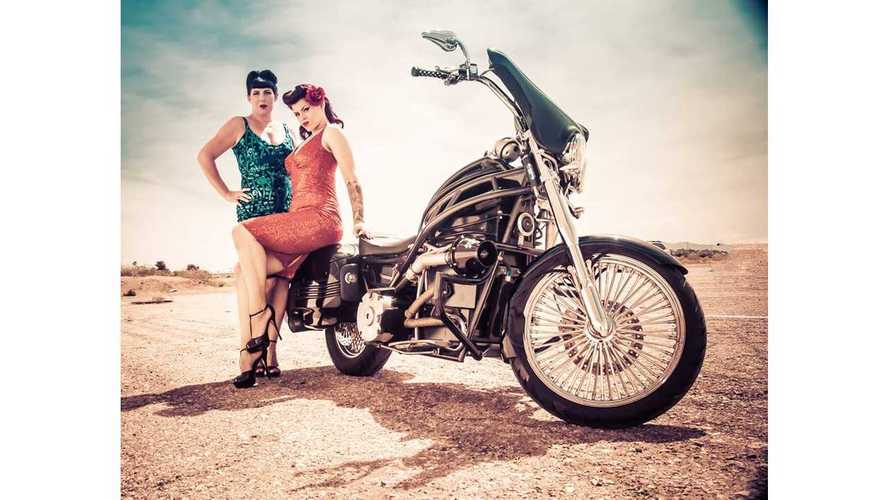 Not everyone in the electric motorcycle building business thinks that an electric drivetrain means a bike has to look like it came out of a science fiction movie like Tron or The Avengers.  Chris Bell, founder and head of Brutus Motorcycle, has a more traditional (and comfortable) vision.  Enter, the Brutus V9.

The V9 is the second in the line-up of 4 electric bikes Brutus offers, and the one most clearly aimed at the Harley-cruiser market.  With the 33.7kWh battery pack it has an estimated range of over 200 miles with a top speed of 115mph (gearing limited).  There's even a Law Enforcement package available for the bike.

Brutus, from Bell Custom Cycles, is clearly focused on becoming a viable electric motorcycle builder.  From the site:

Bell Custom Cycles (BCC) is a family-owned business formed through our love for motorcycles and a common bond all riders share. Early in 2010 Chris started building and fabricating the original Brutus motorcycle after 2 years of development, unveiling it late in February 2011.

The BCC family has expanded and our ties to the motorcycle community have grown strong. Our team has forged bonds that enable us to stay current with the motorcycle industry, both electric and ICE (Internal Combustion Engine), as well as provide fresh, innovative, and award-winning designs year after year.

Our motorcycles are hand made in America, and we carefully select as many American suppliers as possible to insure quality and consistency. We have worked hard to build the Brutus Electric Motorcycle brand and proudly stand behind our entire product line and the products we use. We believe in conservation, recycling, and independence, values that are incorporated into every motorcycle we design and build. Our main goal is to provide an attractive product line as an alternative to the mainstream options now available.

Take a look a the complete specs:

The Brutus family includes the Brutus 2, an evolution of Bell's first design, the Brutus Cafe, the V9 and the V2 Rocket - the bike that Jeremiah Johnson piloted for the win on Pikes Peak this past summer - even with some severe battery pack issues at the very last moment.

Bell's obviously a man who knows his way around motorcycle culture, and he's not afraid to step into the Ring of Fire in the heart of the Forbidden City of Electric Motorcycling: Sturgis.

A huge annual gathering of the faithful followers of Milwaukee iron, blue smoke and wet t-shirts (sometimes even on attractive young girls), riding an electric motorcycle into the maw of this beast may seem sacrilegious - and possibly suicidal.

To those brave souls who've strayed into that community with an electric bike, though, it doesn't come as a surprise that the bike was accepted, and even embraced.  Electric bikes are crossing all boundaries, and the traditional cruiser-types are as intrigued by something as unique as the V9 as everyone else.  To a lot of long-time riders, the electric drivetrain, in whatever form, is just too cool to ignore.

To see some of the reactions, check out his video of Sturgis this summer on the V9: