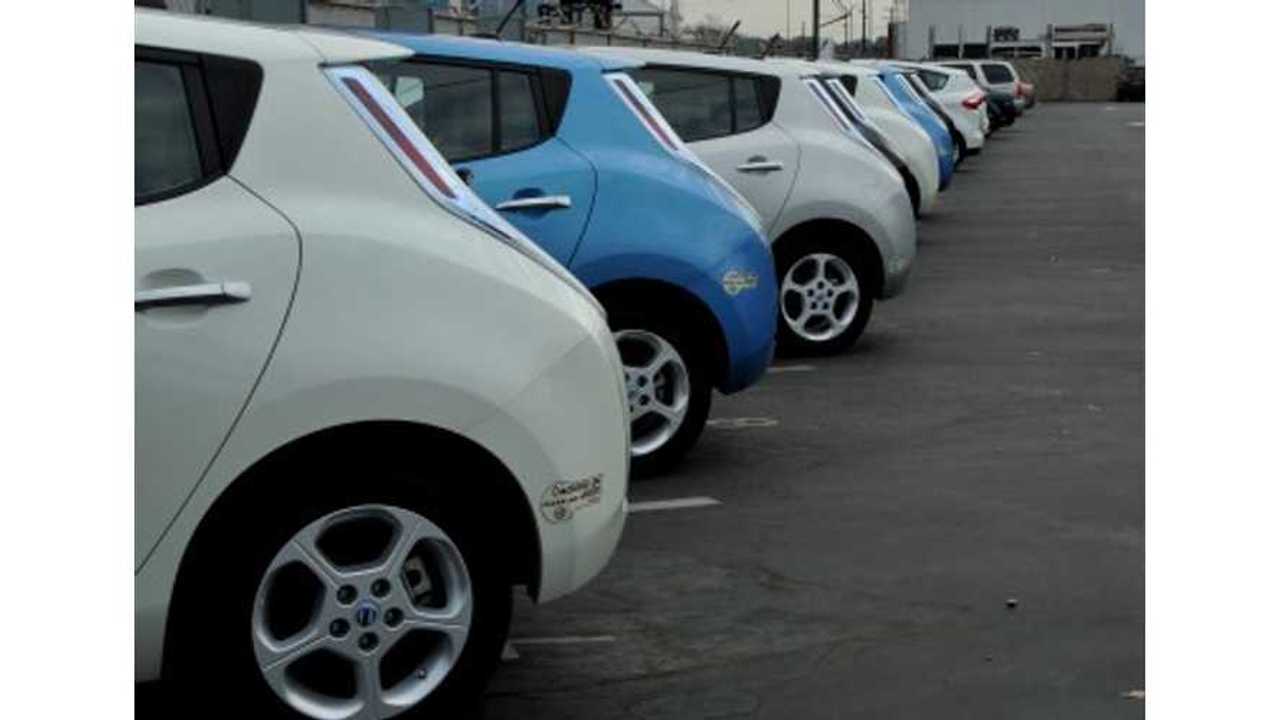 Some BIG news from the Department of Defense:

Actually, this is the large-scale plug-in vehicle fleet in any branch of the U.S. Military, but wait...there's more:

So, these Air Force EVs are vehicle-to-grid capable too!

PRINCETON, NJ – Princeton Power Systems, Inc., a leader in global design and manufacturing of technology products and embedded software for energy management, micro-grid operations, and electric vehicle charging, took part today in the unveiling of a unique Plug-In Electric Fleet on November 14th at 10:45am at The Gordon Conference Center at the Los Angeles Air Force Base in California (LAAFB).

Princeton Power Systems designed and delivered a fleet of bi-directional electric vehicle charging stations that can both rapidly charge the passenger vehicles and provide grid-support services back to the electric utility and grid operator. Princeton Power Systems was called upon to be a key contributor to the ground-breaking project due to the proven reliability and flexibility of its UL-listed GTIB product family, and the company’s track record of successful military and commercial Microgrid projects.

Princeton Power Systems delivered and commissioned thirteen CHAdeMO-compliant fast-charging stations based on the UL-Certified bi-directional multi-port converter; the GTIB-30. The new charging station products, named the CA-15 and CA-30, are capable of 15 kW and 30 kW charging rates respectively. Working directly with electric vehicle OEMs and third-party fleet-management software aggregators, Princeton Power played a vital role in developing the LAAFB solution, enabling the vehicles to compete in the electrical utility ancillary service markets and provide energy services to the Department of Defense (DOD) facilities. The ancillary service revenues will partially offset the EV fleet lease expense, while also providing the potential to improve energy security on base.

“The Department of Defense and Princeton Power Systems share the view that electric vehicle fleets can have long-term cost, logistics, fuel diversity, and environmental benefits,”said Darren Hammell, Chief Strategy Officer and Co-Founder, Princeton Power Systems. “In conjunction with the fast-charging, bi-directional CA-15 charging stations, the vehicles at the Los Angeles Air Force Base also can provide valuable services to the electric grid, further increasing the economic and environmental sustainability of this unique solution.” A fleet of plug-in electric vehicles sits ready to roll at Los Angeles Air Force Base in El Segundo, California, on October 31, 2014. The new fleet is the first installation in the Department of Defense to replace its entire non-tactical fleet with electric and hybrid vehicles. U.S. Air Force photo by Sarah Corrice

A fleet of plug-in electric vehicles sits ready to roll at Los Angeles Air Force Base in El Segundo, California, on October 31, 2014. The new fleet is the first installation in the Department of Defense to replace its entire non-tactical fleet with electric and hybrid vehicles. U.S. Air Force photo by Sarah Corrice

“We absolutely couldn’t have done this without our federal, state and private partners,” said Miranda Ballentine, assistant secretary of the Air Force for installations, environment and energy. “The shared investment and commitment by our partners illustrates that innovations such as this have value not only to the Air Force and Department of Defense, but to the nation as a whole.”

During normal usage, the charging stations will rapidly charge the electric vehicles directly from the electric grid, enabling LAAFB personnel to utilize the electric vehicles as transportation within the base and the region. When called upon to support a vehicle-to-grid request, the electric vehicle’s on-board battery can be discharged rapidly directly into the grid. The rate of charging and discharging, and communication with the car and the grid, are all managed by the CA-15 charging station in a safe and reliable manner, meeting all local and national grid-interconnect codes. In addition to supporting the efficiency and reliability of the distribution system, the charging station and vehicle can provide demand response, VAR support, frequency regulation, and other operating modes.