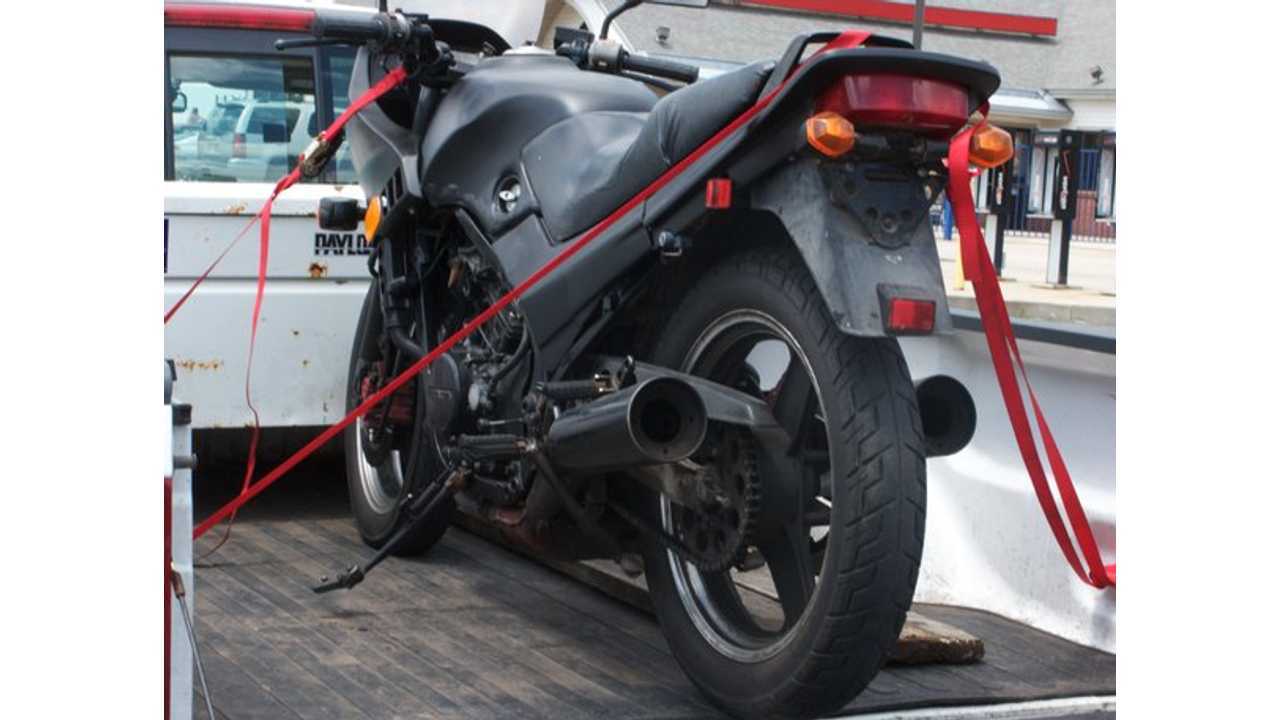 I've been riding motorcycles for over 45 years.  I've built several gas-powered bikes, and once I got it into my head what the electric drivetrain could deliver, all that focus fell directly on building electric motorcycles.  After decades of riding motorcycles and owning more bikes than I'd care to admit to, riding a big electric motor-powered motorcycle showed me a brand-new experience.  At first, most people who start heading down this road of obsession pick up some random chassis on Craigslist for short money and end up with, at the very least, an introduction to what the electric ride is all about.  This is how I started - with a 1985 Honda VF500F with a blown motor.

Being not so much a fan of mid '80s bikes, and a huge fan of 1970s-vintage road-racers (please don't say the word "café" around me), when I found a 1971 Yamaha R5 frame in a chicken-coop in Brookfield MA, (the very same frame that took Yamaha through the late '80s writing roadracing history) I took the entire drivetrain out of the Honda and build the "R5e", a tribute to everything we worked on in the '80s, updated for the 21st century.  Here, for a taste of that, is a video tribute to my misspent youth and "the loop", in Harvard, MA:

Let's just say the last time a motorcycle scared the crap out of me was riding this bike's gas counterpart in 1987 - a bored, ported, blueprinted race-ready Yamaha RD350.  But my electric R5e was faster.

The R5e, like most projects, was pretty much obsolete as soon as I completed it.  I knew exactly what I wanted to change, got some good basic experience behind me building with a fairly standard drivetrain - a PMDC motor, some conservative batteries and components that were originally offered as golf-cart controls.  Those lessons (and parts) behind me, as well as several opportunities to ride some remarkable production-ready bikes, and I started formulating a plan for my dream bike.  A 100kw-powered, top-of-the-charts-handling sport bike that can stand toe-to-toe with any 600cc gas bike on the road or track.

The first thing to decide on was the chassis, and at the risk of sparking some passionate debate on the current state of the motorcycle art, I narrowed it down to two bikes - the Yamaha R6, and the Honda CBR600RR.  They both have a huge central cavity in their frame for batteries, and will match any bike on the road for handling out of the box.

The batteries?  We need something that has the absolute maximum for energy and power density, what with cost being no obstacle.  (We're dreaming, right?)  Though the Tesla's Panasonic cells boast some huge numbers, they may not be the best choice for a bike because of their volume and their power delivery.  The hot setup, based on what everybody is using in their production builds?  Probably Farasis Energy cells.   Here's a look at the 25ah prismatic cells' their data sheet (pdf), if you're into geeking out on batteries.  Both Brammo and Zero are now using Farasis packs.

Now, the motor.  I think the clear choice is the Emrax, based on my comparisons here, on the Electric Chronicles.  Everything I've seen that can match my performance targets is rated around 100kw, and the Emrax is an astoundingly light 27lbs, compared to at least 50-75lbs for the next best option.  Everything on a motorcycle is about power-to-weight.  It's a challenge, though.  It's an "outrunner" motor - the outside case spins rather than the more conventional design where an output shaft is delivering the power.  This is a common design for what the motor was intended - light aircraft, where the prop mounts on the case of the motor.  So, it's a little more work to mount on a motorcycle frame.

It's a liquid-cooled, AC motor, and here's what it looks like:

We have to drive that motor, and for that job we're going to look at the Mission controller, here: Mission Motor Control Inverter.  You've got to be able to match up the motor with the controller, and you can easily under-drive a motor like this with a lesser package.  This will ensure we're going to get all of the 100kw out of this motor, and maybe a bit more.  And thanks to a certain Ohio State student for that tip.

The final result?  We're looking at a 450-500lb bike with around 100-mile range that will do 0-60 in close to 2 seconds.  The top speed would be near 150mph.  This bike will match almost any bike out there for handling.  It will meet, or maybe exceed several already legendary bikes - the Mission R/RS, the MotoCzysz E1pc, the Lightning 218, the Energica Ego, and is in a completely different class than the Brammo Empulse and the Zero SR, both respectable sport bikes.

So yes.  This bike would be completely insane.  And by that I mean "just right".

It's going to be a long, cold (but dream-filled) winter...