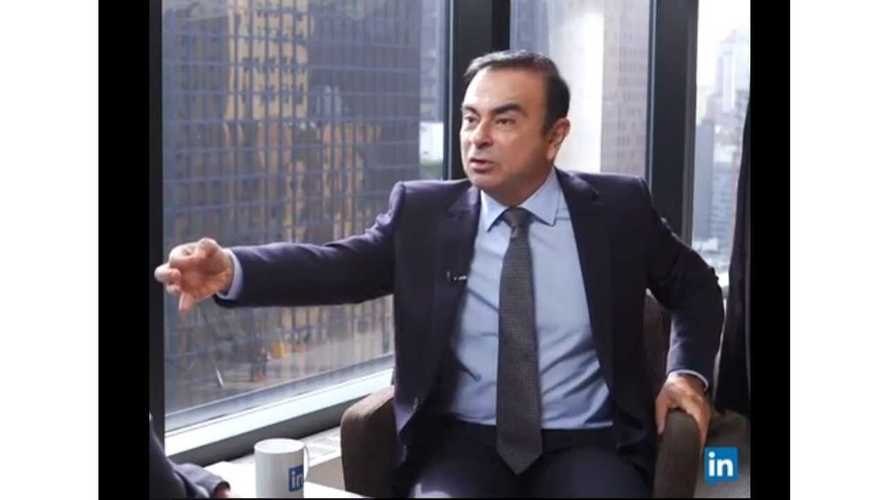 The United States has Elon Musk for all its domestic charismatic, machismo quotes when it comes to electric cars...the rest of the world has Carlos Ghosn.  He speaks for everyone...at least it seems that way.

While Mr. Musk overseas about $4 billion worth of sales a year from 3,000-odd EV sales a month, Mr. Ghosn oversees 3 automakers (Nissan, Renault and most recently Russian auto giant AvtoVaz), which combined sell about $140 billion worth of autos year...or about one in every 10 cars worldwide; of those, close to 10,000 EVs per month.

So for a change we'll feature an interview (with LinkedIn) with the "other" car boss with a cult-like following; and of whom firmly in a plug-in, zero emission future.

The main focus of the video above is asked in this question:

Is there going to be a major shift where the majority of cars are zero emission?  And do you see ride sharing as being part of the future?

"Obviously when you look at all the constraints on the environment, both in terms of emission and in terms of pollution, and when you see the regulations - where they are going in the United States, in China and in Europe, you know that zero emission cars are part of the cards.  That is the way you prepare for the technology, not because consumers are asking for this today, but because they are hinting that this is the kind of car that they may be wanting for the future.   You need to prepare the technology even if you never know exactly when is the time that this technology moves from a niche product to the mainstream."

In listening to the interview, Mr. Ghosn also focuses a lot on "connected" and "autonomous" cars as being the next big thing, as persons trapped in vehicles during transportation are going to want to make that time more useful in the future.

Getting back to the icon that is Carlos Ghosn, another part of the LinkedIn interview focuses on his celebrity, the amount of influence he weilds in the industry, and how he manages 3 huge auto makers independently of each other.