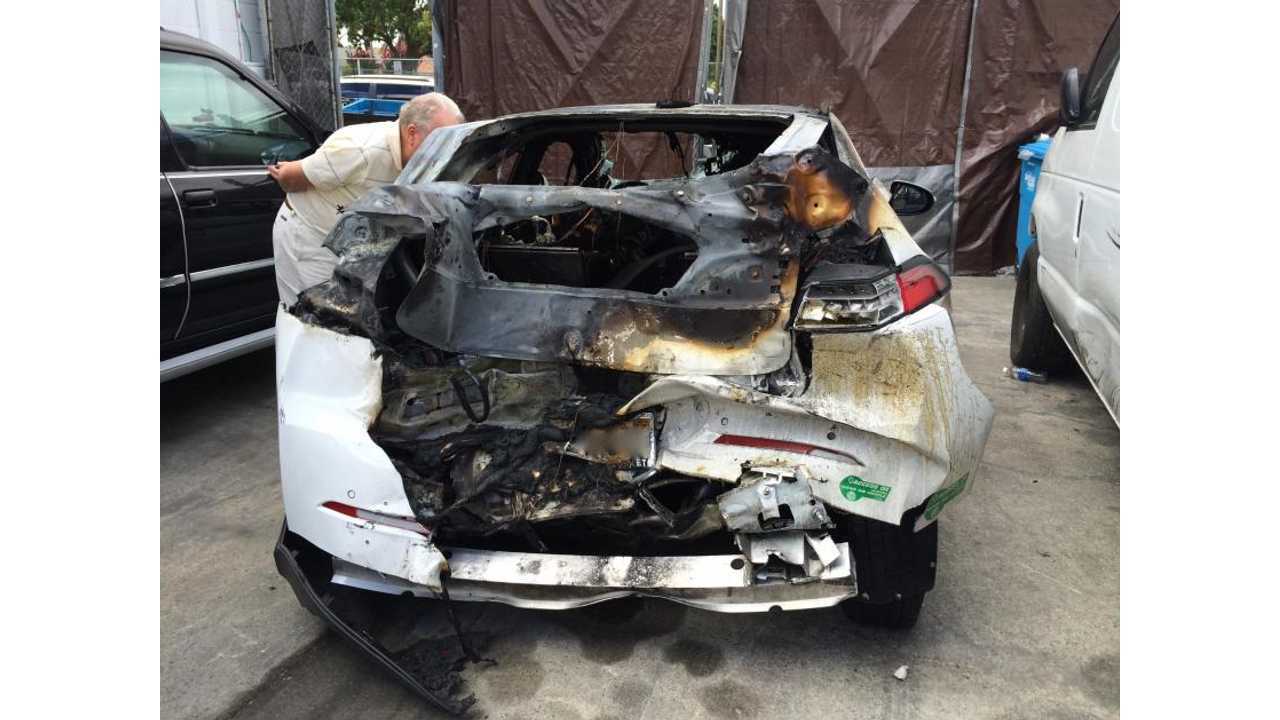 Perhaps a recent Chevrolet Volt fire will prompt a wave of media attention against the "old school" lead acid battery technology.  But we doubt it.   This is more of a potential issue to be aware of if you happen to be a Chevrolet Volt owner.

A recent accident involving a Southern Californian Chevrolet Volt owner resulted in a pretty serious fire breaking out. GM-Volt.com community member (and owner of the car) Ikhan then informed GM, who investigated the problem.

Ikhan stated at the time of the accident last month:

First off, I LOVED my Volt but it was totaled in a rear end accident last month.

Fortunately, I was able to get out of the car when I saw smoke coming from the rear. Within ~ 10 minutes the car was on fire and the passenger cabin was fully engulfed in flames, the windows blew out and the tires melted before the fire department was able to get there. Has this happened to anyone else?

We have contacted GM to investigate. They did come to look at the car and are waiting for the report / results.

I had the car just over 1 year before the accident and was very, very happy with it.

Despite Other Serious Accidents (like this recent Indiana collision), No Chevy Volt Has Ever Had A Lithium Battery Pack Fire-Related Incident On Public Roads

On Wednesday, he reported back the finding had lead (no pun intened) to the 12V battery:

Hi all - sorry for taking so long to get back to you but we only just heard back from GM regarding their findings. The conclusion is that the fire was caused by sparks from the 12V battery. Apparently, the crash forced the body of the car into the 12V battery which caused it to arc and send sparks onto the carpeting of the trunk. The main battery (or battery that drives the car) was not breached and was not involved in the fire. The gas tank was not involved in the fire either.

Thanks all for interest and patience while we waited for GM to report their findings.

So once again.  The "new technology" in this case performed admirably; the Volt's flawless incident record in relation to its e-drivetrain is still in tact.  This indeed looks to be a one-off accident, but we feel it is perhaps also good for Volt owners to be aware of some potential shielding issues around the 12V battery after a rear-end collision.

Check out the original thread at GM-Volt.com here.