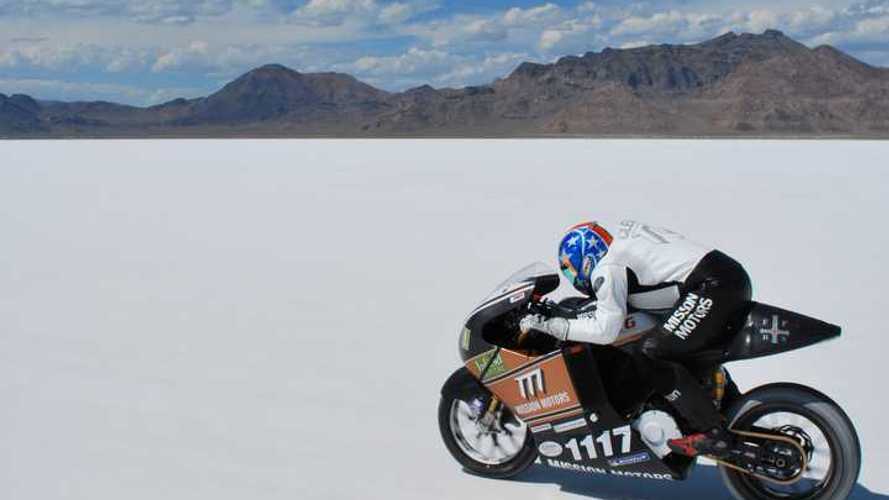 Here's the thing.  We've gone to great lengths to follow the breadcrumbs over the several years Mission has been around, and things got interesting in the Mission story a few months back.  Read all about it here, with the first announcement, and here, with the followup retraction a few weeks ago.  Lately, though, a thought occurred to us.  What about the bikes?

All of the focus has been on the companies and company names, corporate structure and business focus of Mission, Mission EVT, Mission Motors, Mission Motorcycles and Mission Electric.  What about the motorcycle, the new models, the ownership of the design, the production of the components and future development of the bike?  What about that?

Let's start by taking a look at the actual machine, irrespective of the company building it.  In 2009 Mission built the prototype Mission One PLE.  In June of that year, they raced that bike in the TTXGP on the Isle of Man, finishing 4th place in the PRO class.  Later that year, they set the AMA electric motorcycle Land Speed Record at the BUB Motorcycle Speed Trials, Bonneville Salt Flats for 150.059 mph.  By October of that year, the Neiman Marcus LE Mission One was announced, just in time for the holiday gift-giving season, and we remember that distinctly because even though were were very, very good, for goodness sake, there was nothing under the tree that year remotely resembling a Mission One.

At that point the bike was fabricated by Mission Motors, headed by Forrest North, CEO.  The motor and drivetrain were supplied, possibly to their specifications, but not manufactured by them.  It was a pretty clear case of grabbing some off-the-shelf parts and putting together an insanely powerful, fast, good handling and really cool-looking first-of-it's-kind electric crotch-rocket.

It's not until December of the following year, 2010, that we hear of the Mission R (in spite of rumors of a "Mission 2") and Steve Rapp riding the Mission R at the Infineon ReFuel time trials, setting an electric motorcycle lap record of 1:43.7 in June of 2011.

We can only guess what drivetrain is being run here, and who built it, but it's pretty clear this must be somehow an improvement over the original Mission One but somehow still derivative of the same basic design.  This leads us to guess, chassis design, battery and motor tech being what it is, that they've kept basically the same chassis, improved the battery chemistry a bit, and maybe, just maybe are building their own motors - or at least having them built to their spec.

The original Mission One PLE was styled by by Yves Béhar. The Mission R chassis was designed by James Parker and the bodywork was designed by Tim Prentice. As far as the 2010 bike goes, via Wikipedia:  "The powertrain is of Mission’s own design and features a 100 kW liquid-cooled 3-phase AC-Induction motor and 14kwh of batteries."

Mark Seeger, Man of the Month (via InsiderHook)

There's no mention of a Mark Seeger until the launch of the new versions of the R and RS, and the formation of Mission Motorcycles in May of 2013, yet it's claimed in several stories that Seeger was responsible for quite a bit more than simply branding and selling the Mission name.  Via the first report, on InsideHook:

"Eventually, his tinkering led back to the beginning. To bikes. Seeger, an avid rider who had moved to San Francisco, couldn’t find an electric bike that satisfied his needs.

“Here’s the deal: I’m selfish,” says Seeger, laughing. “If the market can’t deliver what I want – even if I have the money – it frustrates the hell out of me. Why does my iPhone, which is a few years old, have better tech than my $30,000 Ducati? No logic in that.”

Seeger studied the market. He tinkered with prototypes. He looked at industry trend lines and saw a point where technology and price would intersect about four years down the road.

Satisfied with his research, Mission Motorcycles was born."

The most often quoted soundbite from that story was this:

How’d he do it? Seeger sums it up thusly:

"Sit in the shower. Dream up an electric motorcycle. Go f---ing build it.”

Clearly, that's the way some wanted the story to read.  There's no real indication that it actually happened that way, and a whole lot to indicate it didn't.

Accepting that timeline and the provenance of the design work, the only reasonable conclusion is that Mission Motorcycles to some degree licensed the work of Mission Motors.

We see three basic scenarios.  First, Mission Motors developed the bike, brought it to the point of the Mission R in July, 2012, and set the thing aside in a warehouse somewhere while they tried to figure out what was next.  There are some sub-plots going on, such as, they've supposedly taken deposits on a number of bikes which they're going to have to fulfill, or refund, but there's really no way to determine what happened there.  So somebody runs into somebody else, (we'd like to imagine this happened in some swanky San Francisco loft party, at about sunset, overlooking the Bay) where the Mission Motors guys and the Mark Seeger guys hooked up and realized they could take their design, license it to some degree to Seeger and his crew, and make the most of the situation.

The other extreme would be that Seeger and his backers walked in and bought the bike, name, design and all, from Mission.  The reality is probably somewhere between the two.  And the extent of that reality is really the question.

Does Mission Motorcycles have the right to that design entirely, to source parts and systems elsewhere to build it, and still call it a "Mission R" and "Mission RS"?  ...or are they bound by an agreement to the original owners of the design?  The nuances of all the possibilities will make your head spin.

There's one thing clear, however.  With the release of the Energica EGO in 2015, a bike that in some respects specs out better than the Mission R/RS and is clearly more aimed at a normal, non-racebike rider, if the Mission R/RS were to be sold today it would be in a scramble to keep at the top of the pile.  With no backing company that could hold a candle to Energica (CRP Group), or even Zero and Brammo at this point, mundane issues like manufacturing, distribution and support are hurdles that could take years, in and of themselves, to surmount.  In a phrase, the Mission R and RS are in a race with time, and losing by the month.

And besides all that.  Who "sits in the shower"?