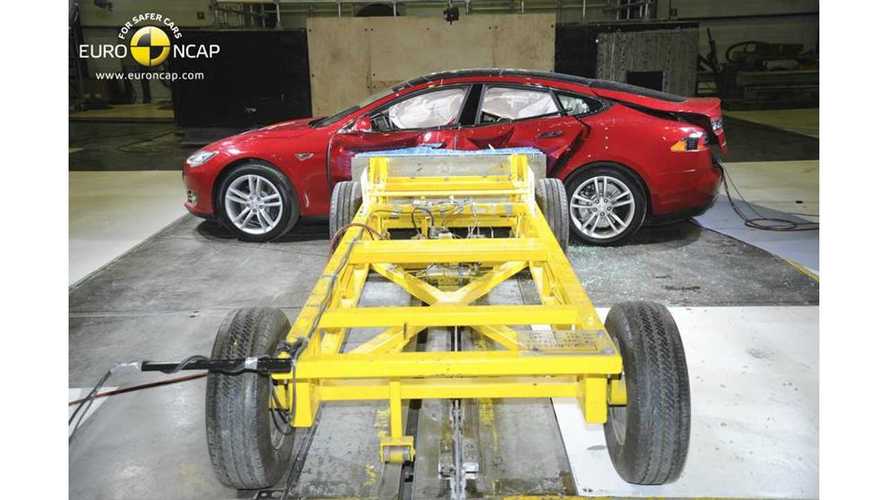 It was more than a year ago when the Tesla Model S became the world's safest vehicle, as tested by the NHTSA.

Model S is one of just a few cars to have ever achieved a 5-star safety rating from both Euro NCAP and the U.S. National Highway Traffic Safety Administration (NHTSA). Additionally, Model S is the only car this year to have achieved both a 5-star Euro NCAP rating and 5 stars in every NHTSA subcategory, including frontal impact, side impact, and rollover. Only two other cars have earned the same recognition since 2011 (when NHTSA introduced its latest rating scheme).

The reason so few models achieve 5-star ratings in both Europe and the U.S. is that each program places emphasis on different safety aspects in the assessment process. NHTSA emphasizes structural and restraint safety, with a deep focus on how well the vehicle can withstand and absorb the energy of an impact while protecting its occupants. It is also primarily concerned with adult occupants. On the other hand, Euro NCAP assesses a wider range of scenarios, including tests for child and pedestrian safety. Unlike for NHTSA, active safety is also an important part of Euro NCAP’s 5-star requirement. Every year, the European organization raises the standard for a 5-star rating to account for technological advances in the industry.

The dual 5-star ratings for Model S validate our holistic approach to safety. We have been engineering passive and active safety systems in parallel, so the car is structurally sound and is also designed to intelligently anticipate and react to potentially dangerous situations.

Structurally, Model S has advantages not seen in conventional cars. It has a low center of gravity because its battery pack, the largest mass in the car, is positioned underneath the passenger compartment, making rollover extremely unlikely. It also has a large front crumple zone because of the lack of an engine, meaning it can absorb more energy from a frontal impact, the most common type of crash resulting in fatalities. Its body is reinforced with aluminum extrusions at strategic locations around the car, and the roof can withstand at least 4 g’s. It was for these reasons that Model S achieved 5 stars in every subcategory when tested by NHTSA in 2013.

This quarter, we started implementing the Model S active safety system in conjunction with the introduction of new Autopilot hardware, consisting of 12 ultrasonic sensors that sense up to 16 feet around the car, a forward-looking camera, a forward radar, and a digitally controlled, high-precision electric brake boost. We specifically selected this hardware to accommodate the progressive introduction of new safety features via software updates over the course of the next several months.

While the features already pushed to the Model S fleet – Lane Departure Warning and Speed Limit Warning – have proven sufficient to merit a 5-star NCAP rating, we will go much further with active safety systems. Features coming soon include Forward and Side Collision Warning and Avoidance, Blind Spot Warning, and Automatic Emergency Braking.

Safety has always been Tesla’s top priority, and we remain committed to continuously improving Model S to ensure that adults, children, and pedestrians alike receive the best possible protection from the car and its technology. In the meantime, Model S owners can be secure in the knowledge that this recognition from Euro NCAP reaffirms their car’s outstanding safety qualities.

And now it's time to look upon the Euro NCAP results:

Let's compare the Model S' score to the other electric and hybrid vehicles tested by Euro NCAP:

Moving on to the ever-popular crash test video:

"Frontal Impact takes place at 64 Km/h, 40% of the width of the car striking a deformable barrier. In the side impact, a mobile deformable barrier impacts the driver's door at 50 km/h. In the pole test, the car tested is propelled sideways at 29km/h into a rigid pole."

And finally a few images from the crash tests: