LEAF Road Adventure Can Be Smooth Sailing, Too! How We Turned Our 2012 Nissan LEAF Into An Offroad Beast 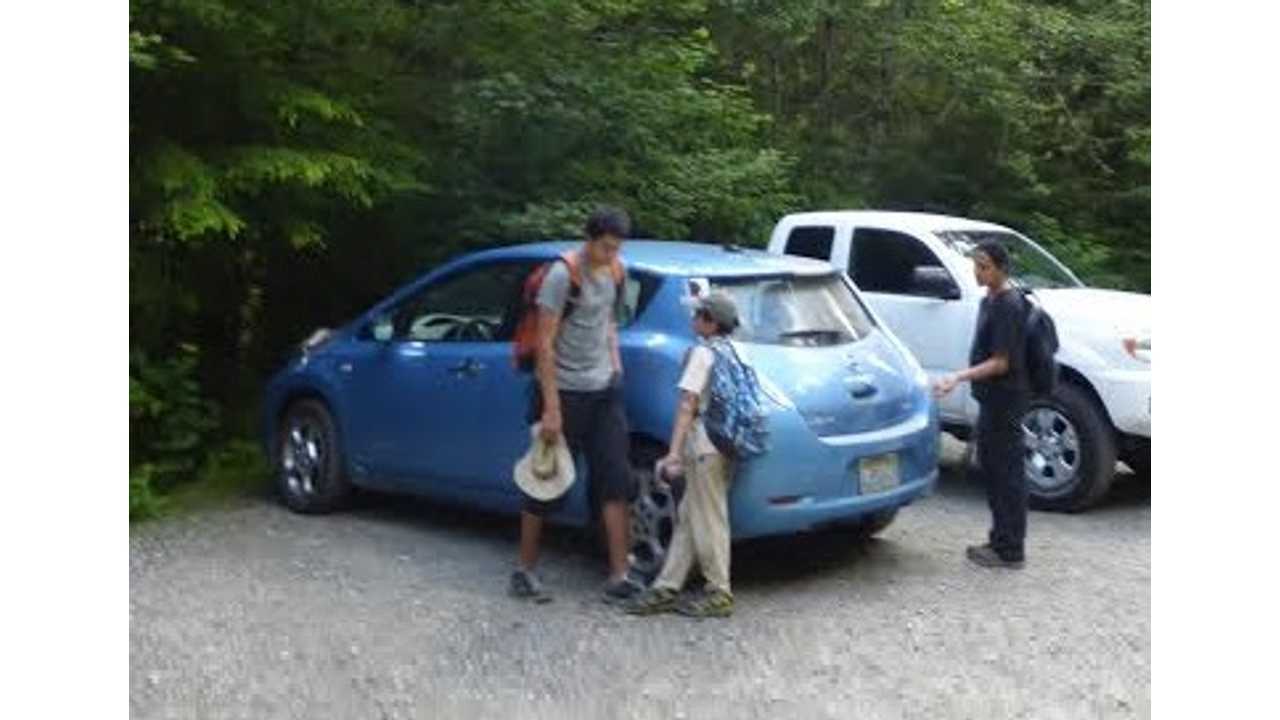 Earlier this summer, I posted here the story of our little Nissan Leaf Mima Mounds adventure. The ensuing discussion was rather lively, most of it nice and constructive :)

What alarmed me about the discussion, is that I might have helped reaffirm the notion (usually pre-conceived) that First-Gen Leaf road trips (or with similarly-capable BEVs) are a nightmare for all except masochists, hard-boiled ideologues and make-a-point type projects.

In two words: Not true.

So in this post, my goal is to encourage those Leaf drivers who are still hesitant to get on the road for QC-assisted trips. I know where you're coming from, because we'd been exactly these people for an entire year! We got our first Leaf in August 2012 and paid $2k extra for that QC port (and whatever else was included in the 2012 SL), but except for one demo charge session hadn't put it into real use until September 2013.

That first experience was eye-opening, and we've been coming back for more ever since. So here, I will -

In a follow-up post, I will describe even more ambitious adventures with the 2014 Leaf that has since replaced our 2012.

Generally speaking, whenever I write "Leaf" it really means "80-ish-mile-EPA-range BEV, with a viable QC option".

So.... About That Mima Trip

Charging-wise, that Mima affair in May has been our worst Leaf road-trip experience to date. Instead of roughly 30 minutes in each direction (on top of ~1.5 hours driving time), our charge-related additions to trip duration were more like an hour going there and 1.5 hours going back. Most of the extra delays were due to issues at our first QC stop in Tumwater, exacerbated by the paucity of QC stops along the Olympia-Seattle I-5 corridor. As detailed in that post.

Back by popular demand: our 2012 before embarking on its way back from Lake Dorothy trailhead, deep into the Cascades. We returned it 6 days later.

Other Day-Trips with our 2012 Leaf: Sultan Sultan!

As Tyrel Haveman nicely explained in this post, the Pacific Northwest, at least west of the mountains, has (compared to most parts of the country) a relatively solid skeleton of QC stations along major highways, thanks to the "West Coast Electric Highway", funded by the Federal Stimulus. In particular, the scenic US Highway 2 crossing the Cascade range northeast of Seattle, has such spots situated ~30-50 miles apart, starting with Sultan, a small town some 30 miles of Seattle.

On a beautiful "Indian Summer" weekend in September 2013, I figured out we can use the Sultan QC spot as a launching pad to get our Leaf to a trailhead fairly deep in the mountains, and hike to Greider Lakes. That's 50 miles each way, the last 7 miles of which are on gravel roads. We stopped at Sultan in both directions, although in retrospect only the return charge-stop was necessary. We took advantage of the 15 minutes stop on the way there, to get acquainted with this small town (and get some cookies). On the way back it fit perfectly with our need for a dinner (we finished the hike at dusk), so Sahara Pizza it was. Not surprisingly, the Leaf had filled itself up long before we finished filling up on food.

As to driving on gravel, surely Leaf is not an off-road vehicle, but reasonably-maintained gravel has worked fine for us so far. In general, if ordinary ICE vehicles can get there, the Leaf can get there too. The energy consumption per mile is a bit higher than on paved roads, but not dramatically.

Anyway... we returned from that trip with appetite for more, but unfortunately soon afterwards the weather had turned. Barring exceptions we are fair-weather hikers, which in Western Washington limits us to May-September plus the occasional non-terrible weekends the rest of the year. Regardless, in November-April you don't usually venture too deep into the mountains for ordinary hiking, because trails and dirt roads are covered with snow.

Early this summer we managed to squeeze in two more Sultan-anchored hikes before returning the 2012 lease in mid-July. Here's a map showing all three:

Marked in blue circles, two QC stops on scenic US-2 as it snakes its way up the Cascades. Little red markers show the trailheads we reached with our 2012 Leaf, aided by the Sultan QC (either on the way back, or both directions). You can easily go much further.

Another nice thing about the US-2 corridor infrastructure, is that there's a second QC spot at Skykomish, about 30 miles up from Sultan. In principle even a 2011/2 Leaf can get there directly from Seattle, enabling

We haven't tried any of these yet, but sooner or later... A third nice thing is, that people can rarely drive over 60 MPH on the windy two-lane US-2. With the Leaf, if you need to squeeze out range, you really don't want to go over 55 MPH for substantial stretches. Simply put, speed will eat up your range. On US-2 you are less tempted to do that than on an Interstate. An Enjoyable Leaf Day-Trip: The Basics

Here's where I come from to the EV world:

I see ourselves as participating in an ambitious social-technological experiment called "Mainstreaming the EV". The idea is to have ordinary families - not hobbyists or serial early-adopters - use EVs as their main vehicles, functioning both as ambassadors and as Beta users for automakers. The experiment's, or rather project's, grand goal is a market transition from ICE vehicles to EVs - which, as I explained here, could be a major coup for global-warming mitigation, and generally good for society as a whole.

In my humble opinion, it is an immense privilege to be able to participate in this project, at little to no extra cost compared with the ICE alternatives. My role is to try and electrify as much of our driving as reasonably feasible.

So: when I drive 55 MPH on an Interstate because I need optimal range from that particular stretch, I don't feel it's The End Of The World As We Know It. When it takes me 30 minutes longer than ICE/PHEV/Tesla to get to a place like Mima Mounds or Lake Dorothy, I don't feel like an idiot (even though I do laugh together with our friends, at their jokes about it).

mynissanleaf.com). In our experience, the drop-off above 55 MPH has been  even steeper than the chart shows." draggable="false">

2011/12 Nissan Leaf range chart by Tony Williams (via mynissanleaf.com). In our experience, the drop-off above 55 MPH has been  even steeper than the chart shows.

As to the practicum... the principles are simple.

So... if your EV has that QC port but you've never used it on a substantial trip, and your region has at least one useful QC spot in an interesting direction - do give it a try. And then rush over here and tell us all about it!