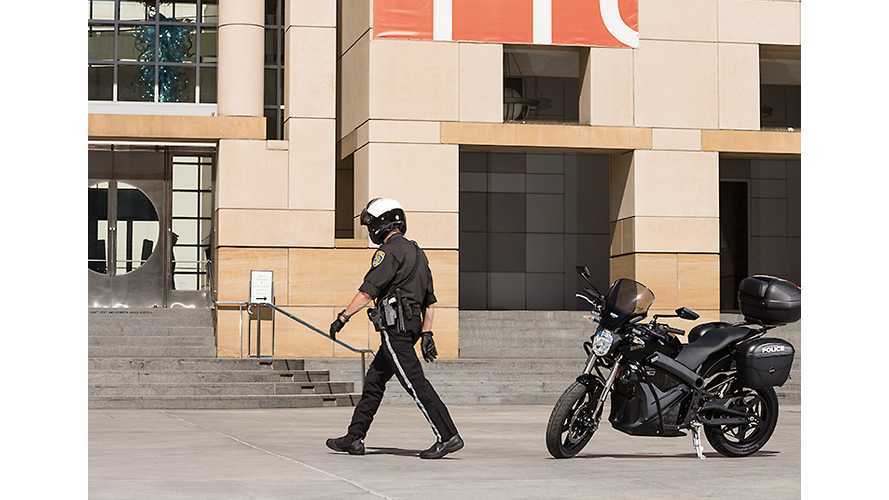 Picture this.  A long time ago in a quiet New England town, a parade was had, celebrating the 250th birthday of the sleepy burg.  For this celebration, the crack precision Harley-Electraglide-in-Blue-riding Boston Police Department Motorcycle team was enlisted and showed off exactly what close to a half-ton of Milwaukee steel can do in the hands of a expert.  Every quarter-mile or so of the parade route, the team would go into formation and do their tricks.  And every quarter mile or so, they'd leave behind a blue haze of exhaust and burning oil hanging low over this quaint New England village.  This made an impression on the (then) young eyes of this writer.

This isn't particularly breaking news.  Since its very early days, electric scooter manufacturer (now defunct) Vectrix saw the potential in placing its scooters in the hands of the police, and the NYPD adopted several Vectrix products, leading to deployment of Vectrix in the UK.  Brammo was delighted to announce the Hong Kong police department was to adopt its Enertia models, and, not to blur the line between the military and law enforcement, Zero is offering the MMX as a personal stealth weapon of choice for military applications.

But what's the common thread amongst the law enforcement adopters?

We have seen pretty much all the bases covered in supporting arguments - the stealth, the versatility, the light weight and ability to jump curbs and climb stairs.  One thing we don't read about too much is the ability to just flip a switch and go, with no warm-up time and no elaborate gasoline-engine starting sequence.  However, the strongest common thread?  The emissions.  Or lack thereof.

That blue smoke hanging over the parade route is something that was painfully obvious in that pristine New England town.  It's not so obvious in the bowels of the city.  The fact is, though, motorcycles, in spite of boasting significant MPG ratings over cars, suffer fairly dismal ratings for emissions.  As Mythbusters reported, "At best, it's a wash. Motorcycles are just as bad for the environment as cars," Savage said on the show. "At worst, they're far worse."

From the LA Times story "'MythBusters' asks: Are motorcycles greener than cars?":

"The upshot? Motorcycles were indeed more fuel-efficient than cars and emitted less of the greenhouse gas carbon dioxide, but they emitted far more smog-forming hydrocarbons and oxides of nitrogen, as well as the toxic air pollutant carbon monoxide. For the most recent model year vehicles tested -- from the '00s -- the motorcycle used 28% less fuel than the comparable decade car and emitted 30% fewer carbon dioxide emissions, but it emitted 416% more hydrocarbons, 3,220% more oxides of nitrogen and 8,065% more carbon monoxide."

So many attributes linked to an electric motorcycle, or electric-assist bicycle for that matter, make sense for law enforcement from a cost and use standpoint.  Probably the second most popular reason given is the reduced maintenance required - less time needed for changing oil, filling the gas tank, adjusting chains, tuning up and cleaning...    But who would have guessed that cops would lead the charge for cleaner urban air?