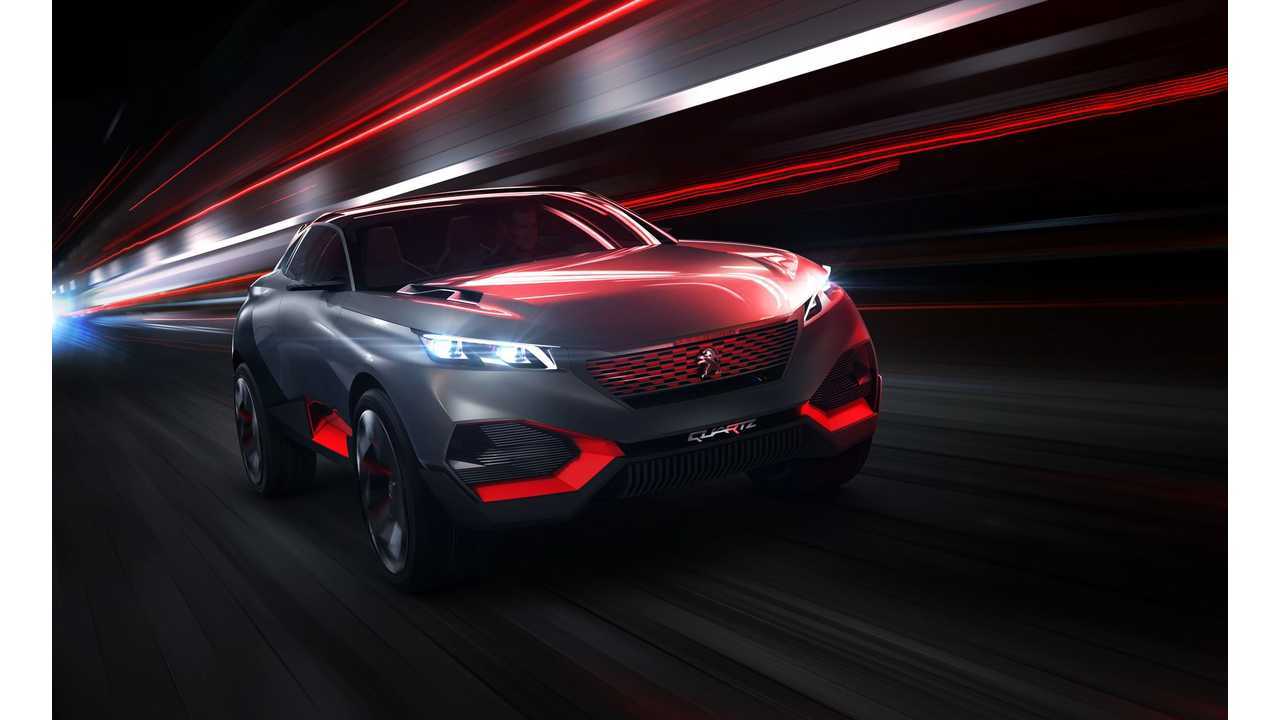 The 2014 Paris Motor Show will be especially strong in the plug-in hybrid segment this year as Peugeot announced its second plug-in: QUARTZ Concept.

This SUV seems to be a strong competitor for the Mitsubishi Outlander PHEV Concept-S.

The QUARTZ is equipped with a four-cylinder 1.6-liter THP gas engine (270 hp and 330 Nm of torque) and a six-speed automatic transmission. There are two 85 kW electric motors - one per axle.

In total there is 500 hp available in Race mode.

The unidentified lithium-ion battery pack has - according to Peugeot - enough capacity for up to 50 km (31 miles) of all-electric mode.

Complete description on the "ultra-athletic crossover" with innovative materials and a driver-dedicated i-Cockpit can be found in press blast:

The PEUGEOT QUARTZ Concept unveils a new vision for the Crossover segment at the 2014 Paris Motor Show. This next generation SUV blends dazzling design with innovative materials and a powerful HYbrid drivetrain to create the ultimate premium family car experience.

“With the EXALT and QUARTZ Concepts, the Brand is showcasing its vision of the high-end automotive market. PEUGEOT is committed to developing exclusive concepts for its customers through outstanding design, innovative materials and unparalleled sensations.” Maxime Picat, PEUGEOT Brand Chief Executive Officer

The strong, powerful and sporty style of the PEUGEOT QUARTZ combines the body of an SUV with the cabin of a saloon. Sleek lines convey a dynamic feel that’s further accentuated by short over- hangs and the dramatic 23-inch wheels sitting inside generously rounded wheel arches. At 4.5m long and 2.06m wide, the QUARTZ has an athletic stance on the road that’s further emphasised by its long bonnet and louvres that help improve airflow to the engine.

The lighting system features LED units for improved efficiency. As with all new PEUGEOTs, the lion badge stands in the centre of the grille. But on the QUARTZ it’s brought to life by a chequered pattern that shifts depending on the angle you view it from. A glass roof flows towards the rear wings and incorporates two spoilers to further enhance its aerodynamic design. These are aligned with the Coupe Franche separator between the two QUARTZ finishes: mineral grey at the front, inspired by rock crystal, and matt black for the rear wings, offset by occasional splashes of red.

Wheel spokes have been kept to a minimum thanks to the strength of the materials and they’re covered with composite flaps. These optimise aerodynamic flow and help cool the brakes to ensure improved heat resistance.

“The PEUGEOT QUARTZ Concept is the marriage in a single form that embraces the lower aspects of an SUV with the upper features of a saloon. The styling reflects the function of each part. The QUARTZ's sculpted body and innovative materials pack a punch while ensuring dynamic efficiency.” Matthias Hossann, PEUGEOT QUARTZ Design Manager

The QUARTZ is based on the same EMP2 platform that underpins the new 308. The composite structure and bonded panels save weight but bring exceptional stiffness. This enabled PEUGEOT’s engineers to remove the central B pillar and create scissor doors. A retractable step further eases access.

Basalt features strongly in the centre console. This strong but light material is formed when magma is quickly cooled once it comes in contact with the elements. It has the same properties the world over, making sourcing much easier.

The QUARTZ Concept is the first-ever vehicle to employ digitally woven textile. This innovative process can create large and complex components that can be used as soon as they come off the machine. No cutting is required meaning no waste. The textile is woven with polyester fibre from recycled plastic water bottles.

To create a sportier feel, the floor pan, sides and roof are trimmed in black leather, with contact points such as seat cushions and backs in tawny leather. To complete the look, the door frames are milled from a block of composite material. A red hue is used to fill the grooves left by the machine.

“The QUARTZ Concept has a contrasting interior and exterior. The cabin is designed to convey an enticing sense through its sophistication and refinement. Yet the overall feel is undeniably sporty, with an i-Cockpit dedicated to the driver's every need.” Sébastien Floutier, PEUGEOT QUARTZ Colour and Trim Designer

The PEUGEOT i-Cockpit keeps everything at the driver's fingertips. The compact steering wheel is inspired by competition models with controls embedded in it. This allows the driver to use the indicators, change driving modes and shift gears without taking their hands off the wheel. The head-up display provides a large, configurable screen with a central 45-degree polycarbonate strip to show additional information. The instrument panel is on both sides of the small steering wheel and the head-up display is angled towards the driver to ensure easy access to the toggle switches.

Each of the four passengers has a bucket seat to optimise interior space. The seat structure is left exposed and features a four-point retractable harness, with floating cushions and backrests trimmed in tawny leather to ensure excellent comfort. The driver's seat has a solid wraparound fit to complement the car's high performance.

“PEUGEOT's style strength lies in its prowess at tackling a saloon or hatchback just as effectively as a Crossover to create the kind of stylish car that people would really love to own.” Gilles Vidal, PEUGEOT Design Director

The PEUGEOT QUARTZ uses a plug-in hybrid drive train comprising a petrol engine supplemented by two electric motors. The evocatively embossed bonnet houses the 1.6-litre THP 270 power plant developed by PEUGEOT Sport. Mated to a six-speed automatic transmission, the four-cylinder engine delivers torque of 330Nm, with a specific output of nearly 170hp per litre, making it one of the world's best performing engines.

There are three driving modes: ZEV can cover up to 31 miles on a single battery charge using the plug-in battery; Road mode uses the combustion engine and front electric motor to enhance driving pleasure and maximise battery charging during deceleration; Race mode harnesses the power of the engine and both electric motors to get the most out of the chassis with a limited-slip differential for increased driver engagement.

The front axle of the QUARTZ employs bespoke MacPherson struts. On the rear there’s a multi-arm suspension arrangement including the on-board electric motor. The pneumatic suspension automatically adjusts ground clearance between 300 and 350mm. This is controlled by an optical system that uses cameras linked to the satellite navigation to read the road and anticipate changes in its surface.